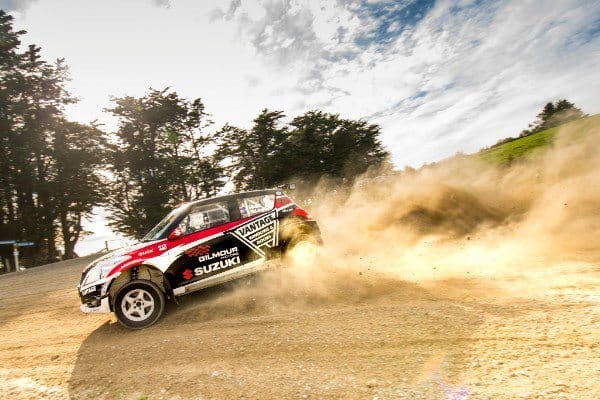 Emma Gilmour and co-driver Anthony McLoughlin are looking forward to getting back into the Suzuki Swift AP4 for the Otago Rally this weekend. Photo: Fast Exposure Photography

Consistency is the key ingredient that Dunedin rally driver Emma Gilmour will be adding to her 2018 Brian Green Property Group New Zealand Rally Championship, as she looks to this weekend’s Drivesouth Rally of Otago.

It has been a relatively short off-season but Emma and her team have been hard at work making improvements to the Vantage Windows and Doors Suzuki Swift AP4.

“We are looking to improve on our consistency from last year and will be targeting being on the podium at each of the six rounds this season. Part of achieving this has been putting the Suzuki through a thorough weight-loss programme,” Emma says.

Running a 1600cc engine, which is smaller than many of her rivals’ 1800cc-plus power plants, Emma has identified making her car lighter, as an area where she can gain back an advantage. The team has been through the Suzuki and adapted areas, such as the under-body protection and rear windows, to more weight-efficient materials.

“We are not looking for massive gains but all the little things we can adjust just add up to the total package being a bit lighter,” Emma says.

She has also embarked on her own self-improvement schedule, building her fitness base and also working closely with long-time co-driver Australian Anthony McLoughlin to refine their pace note system.

“Teaming up for our fourth consecutive season in the Suzuki, we’re in a great position to build on that rapport and experience, using our shared professional focus to make our notes really work to our advantage,” Emma says.

Anthony joined Emma for the recent Eastern Southland Car Club’s Popotunoa Rallysprint, where they could put some of their new strategies into practice and the pair came away with second place.

“These two events have been crucial as we have had a few wee hiccups along the way and have been able to iron them out before the rally season begins,” Emma says.

She relishes having her home event as the first outing on the six-rally 2018 calendar, as it is always a great boost to see all the Dunedin fans cheering her along over the world-famous stages, like Kuri Bush, Waipori Gorge, McIntosh Road and Whare Flat.

“I love the local support I have at the Otago Rally and I also want to thank my loyal sponsors for being back on board for 2018. It’s wonderful to have such long-term sponsors, who know what we are capable of achieving,” Emma says.

The best time to see Emma, Anthony and the Vantage Windows and Doors Suzuki Swift AP4 and get an autograph, or poster, is on Friday at the night motor show and ceremonial start in the Octagon from 5pm. The first car leaves 6.15pm.