Harry Bates has driven his Toyota Corolla S2000 to a home town victory on day one of the National Capital Rally in Canberra, round three of the Australian Rally Championship.

Molly Taylor and Bill Hayes were third in their Subaru WRX (subject to a possible one-minute penalty), while Eli Evans and Glen Weston finished a fine fourth on the debut drive of the Mini Cooper AP4.

“It was a really good day and we pushed hard from the outset,” Bates said.

“We broke a sway bar mount at the start of stage two and that cost us a little time and some confidence, but other than that it’s been the perfect day.”

Quinn also had a good day, with a bent rim and a slowly deflating tyre on the day’s final stage his only real concern.

“The car is a lot better than it was in WA, and is probably only lacking 5-10% of the power that we know it is capable of,” he said.

Molly Taylor was in the battle for the lead throughout the morning, but dropped time in the afternoon, although there were no problems reported in the Subaru camp.

“We didn’t improve our stage times in the afternoon as much as Harry did, so we dropped some time, but we drove flat out and had a good day,” the reigning champion said.

Evans was satisfied with his opening heat in the Mini, although admitted that the car was nowhere near perfect and still needed some set-up changes.

“I can’t put my finger on what it needs, but it just doesn’t feel quite right,” he said.

“The car is incredibly strong and the guys have done a brilliant job building it, so now we just need to tune it and find the sweet spot.

“I pushed hard all day. I don’t like being a minute from the lead, but that’s what it is, and it’s good to get to the finish of the first day in one piece.”

Fifth in heat one was the Subaru of Tony Sullens, followed by Mick Patton’s Mitsubishi.

Seventh placed Brad Markovic was struggling with a lack of power in his Subaru during the day, while the top 10 was rounded out by Tom Clarke (Lancer), Craig Brookes (Subaru) and Andrew Penny’s Subaru. 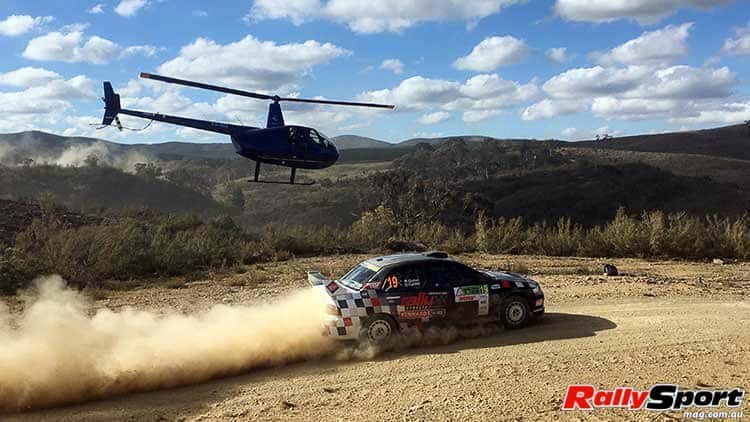