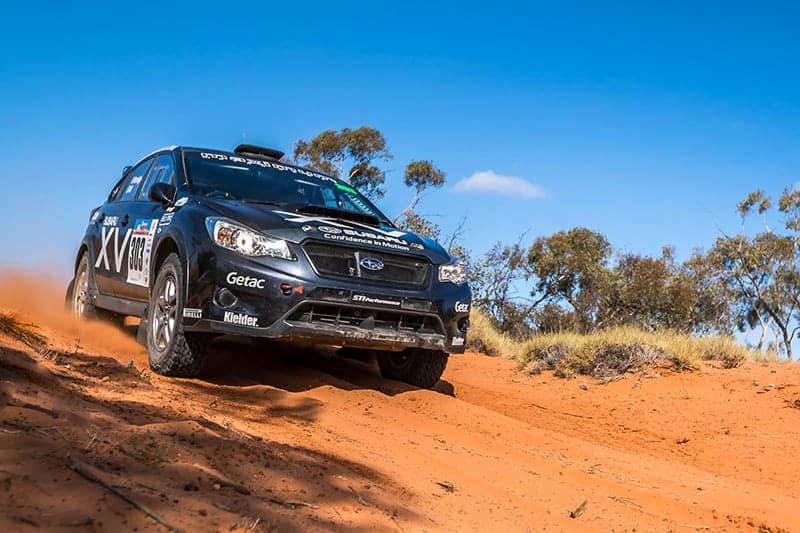 Wednesday was a day for making up lost time for Rob Herridge, co-driver Sam Hill, and the Maximum Motorsport Subaru XV at the 2018 Sunraysia Safari.

After problems with their GPS antenna on the opening leg saw them lose valuable time, day two was all about making up ground on the rest of the field.

In fact, by the end of the day, the Subaru XV had moved up into the outright top-5, the combination of consistent speed, accurate navigation, and the misfortunes of others.

“The car has been an absolute bullet!,” exclaimed an up-beat Rob Herridge.

“We really wanted to push hard today and conditions suited the car. We’ve been going pretty hard all day and keeping pace with the bigger cars, so we’re really pleased with the way things are going.”

Leg two of the Sunraysia Safari included three competitive stages, with crews heading north of Wentworth in the morning, then east towards Pooncarie for two more stages after a midday service break.

Although there were four stages planned, the opening test was cancelled due to livestock in the area. The severe drought in western NSW taking its toll on cattle that is too weak to be moved.

But for the #303 Subaru XV the only problem was a low hanging tree branch.

“We collected a branch early in the day. It smashed the windscreen right in front of Sam and bashed in the roof a little. So the XV now has a couple of battle scars!

“But we replaced the windscreen at service tonight. During service we also noticed an oil leak that we’ve traced back to the power steering rack. So we’ve replaced that as well, and the car is ready to go.

“We were fourth fastest for the day, so that means we’ll be starting fourth on the road tomorrow. I’m happier being in that position. The cars in front of us should all be a little bit quicker than us, so we should benefit from a little extra time for their dust to settle.”

Thursday is the longest day of the event, with more than 350 kms of competitive stages.

The day opens with the long and fast Belah stage close to Mildura, then the short Grand Junction and two afternoon stages run between Nearie Lake and Ellerslie.