Hyundai driver David Holder has continued his championship winning form after a great drive to win the first round of the New Zealand Rally Championship at the Otago Rally.

In his first event in the Hyundai i20 AP4+, Holder (pictured right) lead overnight, and continued his strong form on Sunday to win the rally ahead of Andrew Hawkeswood’s Mazda 2 AP4.

Despite losing over 30 seconds on the first stage of the day, Holder won three of the day’s following six stages to guide the Hyundai to its second straight Otago Rally win.

Hawkeswood, who also lost time on the first stage, strung together a series of top five stage times to consolidate his second place.

After leading briefly on day one, Rhys Gardner finished two minutes adrift of the leader, capping off a great weekend for the Mazda 2 driver.

Graham Featherstone and Sloan Cox rounded out the top five after consistent runs in their Mitsubishi Evos – both collecting a stage win over the weekend, with Dylan Turner (Mitsubishi), and former New Zealand Champion, Ben Hunt (Subaru), further back.

Glenn Inkster was a casualty on the second day, with mechanical problems halting his Skoda Fabia, while local hero, Emma Gilmour, won the day’s opening stage, before retiring with steering damage. 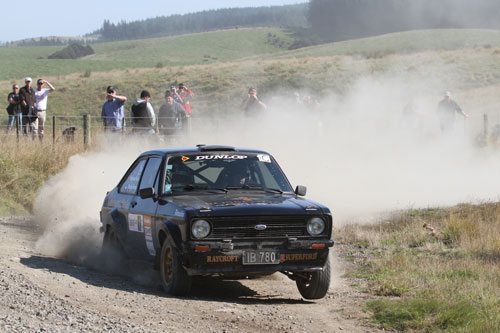 A stellar battle emerged between Martin and New Zealander, Regan Ross, early on day one, and continued right until the end of the final stage.

Ross lead overnight, however Martin took the Sunday honours, winning all but two of the day’s stages, reeling in the 23.4 second day one deficit.

The 47km Shaw’s Hill stage proved decisive, as Martin took the advantage, taking the stage victory by over 20 seconds.

Marcus Van Klink and Derek Ayson both hit trouble throughout the day, with off road excursions ending their chances of a podium place.

John Silcock finished his strong weekend with a podium finish, guiding his Mazda RX7 to the finish over four minutes behind the two leading Escorts.

A roll during in the day’s latter stages didn’t stop Jeff Judd, as he got his Escort home in a fine fourth place.

Ashton Wood just missed out on a top five position after Tony Gosling struck problems late in the day. Both were driving Escort RS1800s.