The Gisborne event, which ran on 2 July, was the fourth of five NZRC rounds for the current season, so Holder’s drivers’ championship victory comes with one round to spare.

Holder and Farmer have had some ups and downs in this season’s four rallies. Third at the season opener in Otago behind Paddon and defending NZRC champion Ben Hunt, Holder then secured his debut NZRC victory in Whangarei – the same event at which Paddon also won his first national rally back in 2007. Going into round three in Canterbury, Holder had a fairly comfortable points’ lead over Dunedin’s Emma Gilmour and Hunt, but crashed out in an incident the 27-year-old describes as “more frustrating than serious”. 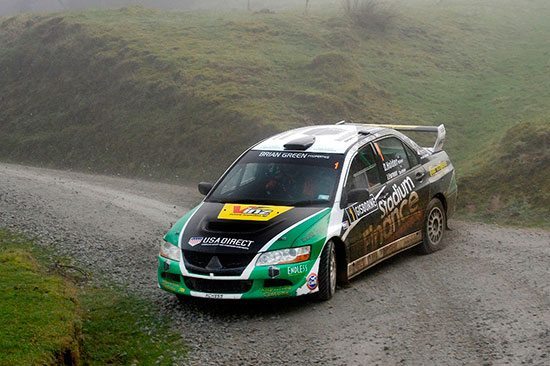 Heading to Gisborne, Holder’s championship lead over Gilmour was down to just six points. But Gilmour’s mechanical woes and yet another off-road incident for Hunt meant Holder could take a comfortable win and therefore an unassailable lead in the championship prior to the final round in Coromandel in August.

“Before the last stage, Jason, my co-driver, told we could win the title and the guys from Volt TV were putting extra cameras in the car, so we had some fun and made sure we got through cleanly to the finish,” says Holder.

“I’m so stoked to finally be able to pay back my main supporters Tony Gosling from Stadium Finance and Hayden with this championship title. Tony and Hayden have backed me from the start, which is amazing.”

“Hayden saw some in-car footage of me on the internet and got in touch. Basically he wanted to help out somebody with whatever he could and from then on he’s been kind of the mentor and I’ve been the protégé.”

Tony Gosling, director of Stadium Finance which has also backed Paddon, says: “I first saw Dave Holder going through a corner in his Toyota, which was a pretty basic car run on whatever second-hand tyres Dave could afford. Everyone else was changing down for the corner and there was Dave changing up a gear. He was right up there battling with faster cars. That’s when we got involved.”

In 2012, Holder won the rookie driver of the year title in a Ford Fiesta before Stadium Finance bought Paddon’s Evo 8 for Holder to rally. He piloted the Evo 8 to the junior rally championship in 2014 but had a major crash at the beginning of 2015 which nearly ended his rally career.

“I certainly thought hard about whether to continue last year, but had so much support from a whole lot of people,” Holder says. “When I came back for the final two rounds of the 2015 season, Jason joined me as co-driver. His experience has helped me a great deal and he puts in heaps of effort behind the scenes to help me and the team. We’ve got a great team culture this season and this is the longest I’ve had the same co-driver – it can take a while to find the right person. I think he’s one of New Zealand’s most highly-regarded co-drivers with 22 years in the sport and this is his first national co-drivers’ championship title, so I’m delighted for Jason too.”

An engineer by profession, last year Holder took time out from his job with the support of his wife to pursue his goals as a professional rally driver. Originally from Invercargill, Holder’s move to Mount Manganui was another component of furthering his rallying career.

Gosling adds: “Dave is a great guy. Over the last four years he’s made an incredible commitment to rallying. He even left his fulltime job for a period to concentrate on securing sponsorship. Someone who makes that sort of commitment to pursuing their motorsport ambitions is the sort of person we, as Stadium Finance, like to back. We’re all about good people, really good sports. We’re absolutely delighted to see Dave follow in Hayden’s footsteps to become the New Zealand rally champion and in doing so, secure Stadium Finance’s second outright national rally championship.”

Stadium Finance’s support of New Zealand includes Paddon’s history-making victory in a BDA Escort at the 2015 Rally Otago and enabling Greg Murphy to enjoy the thrills (and spills) of rallying in the Stadium Finance Mark 1 Ford Escort and, this year, in a Vauxhall Chevette acquired specifically for that purpose. Stadium Finance also backs Jayden Dodge who won the SsangYong Racing Series last summer.

Of next season, Holder says he’s focused on gaining as much seat time as he can. “I’ll also be talking with various people about the possibility of getting into a new AP4 rally car, but first, we’ll wrap up this season in Coromandel in August where we’ll enjoy making sure we promote our sponsors with some great community-related activities.”