Orewa pair Leigh Hopper and co-driver Michael Goudie have staked an early claim on victory in the new Targa Hawke's Bay tarmac motor rally event after finishing a wind and rain-swept first day with a lead of just under a minute over fellow Mitsubishi Evo 10-mounted pair Chris West and Andrew Simms.

Aucklander Gill's Evo 9 was easily fixed and he and Robinson were able to re-join the event in the afternoon.

Suitably fired up they won the three remaining stages too. However as the field returned to Havelock North for the overnight parc ferme they were still over three minutes down on Hopper and Goudie and the other pairings they had been swapping stage times with before their accident, West and Simms, and circuit-owning entrepreneur Tony Quinn and his new co-driver, Kieran Anstis, in Quinn's Porsche 911 GT3 RS.

Quinn and Anstis were the only other pairing to win a stage in today's wet, cold and very slippery road conditions and were first 2WD pair home behind the 4WD cars of Hopper and Goudie, and former NZ (gravel) rally champion Chris West and his co-driving boss, Andrew Simms.

As a wintry blast worked its way up the country the temperatures plummeted to single figures in the 'Bay, the treacherous road conditions also catching out - amongst others - the Subaru WRXs of  Nic de Waal and co-driver Shane Reynolds, and  Troy Twomey and Bevan Parker, in the first stage, and the Holden Commodore of Robert Gunn and Andrew Spier, and HQ Holden-based Cheetah sports coupe of Tony and Jo Butler, in the second. 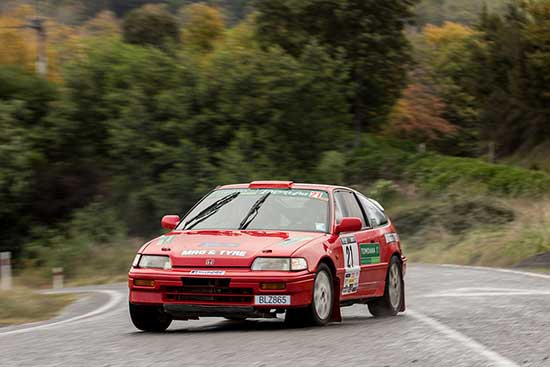 Also impressing in the challenging conditions in their 2WD Toyota Starlet were brothers Tom and Ben Grooten from Orewa who finished eighth, just eight seconds behind the Green/Pedersen Mirage.

Another giant-killing performance by the driver of a small, light 2WD car came from local driver Nathan Tough with Greg Browne from Feilding reading the notes. They spread-eagled the ten-strong field to easily win the one-day Rally of Hawke's Bay event-within-an-event, their total time over the seven stages good enough for 11th overall.

Finally, after leading the Metalman Classic 2WD class for most of the day Nelson pair Bruce Farley and Glen Warner speared off the road late in the final stage, gifting the end-of-day lead in their class to fellow BMW 3-series pair Nigel Patterson and Warren Glassford from Auckland.

The new, two-day, Targa Hawke's Bay event continues tomorrow (Sunday) with eight more stages which will take competitors and those in in the associated Targa Tour as far west as Mangatainoka before a return to the finish at Havelock North.

For more information go to www.targa.co.nz.