He and Goudie did in style too, taking over the lead half-way through the first leg on Saturday when early pace-setter Jason Gill and co-driver Mark Robinson (Mitsubishi Evo 9) slid off the road and lost time.

They then withstood day-long pressure from former New Zealand rally champion Chris West and co-driver Andrew Simms (Mitsubishi Evo 10) on the second leg on Sunday to arrive at the finish line in Havelock North with 42 seconds in hand.

Making the win even more noteworthy was the fact that it was achieved in an unfamiliar car, Hopper forced to lease a production-spec Mitsubishi when it became apparent that work repairing damage to his own much modified Subaru Impreza WRX (damaged on debut in this year's Targa Rotorua event) would not be finished in time.

'We've definitely been giving it all she's got but at the same time, not doing anything silly," Hopper said at the end of the first leg.

It was a strategy which, as it turned out, suited the cold, wet/dry road conditions as much as it did the change in Hopper's circumstances.

Though they won only four of the event's 15 stages outright, the pair never looked like losing the overall event lead they held from the fourth stage on Saturday (the second run through the 36.41km Crownthorpe west of Napier)..

Gill and Robinson showed stage and potentially event-winning pace on Saturday morning only to lose three minutes on Hopper and Goudie with a spin which stranded them in the middle of Crownthorpe. And despite their stage-winning (three) pace on the drier roads on Sunday, Chris West and Andrew Simms could not seriously dent the close-to-a-minute margin Hopper and Goudie had built up over them in the slippery road conditions the rain brought with it the day before. 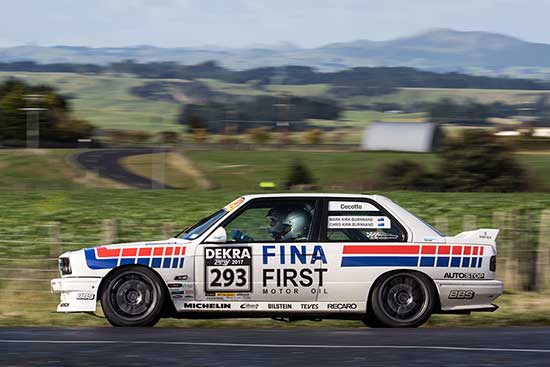 Chris and Mark Kirk-Burnnand were fifth in their pretty BMW M3.But both Porsches ended up over three minutes down on the Mitsubishi Evo 10s of Hopper and Goudie, and West and Simms, with a third Evo 10 - in the hands of another Auckland pair, David Rogers and co-driver Aidan Kelly - fifth, and Palmerston North rally veteran Brian Green and co-driver Fleur Pedersen seventh in Green's locally-built Evo 10-powered Mitsubishi Mirage.

Splitting the Rogers/Kelly Evo 10 and Green/Pedersen Mirage was Perth-based Kiwi expat Robert Darrington and his co-driver Dave Abetz in the first BMW home, the pair joining the list of stage winners on Sunday after a storming run through the epic 33km long Elsthorpe stage up the Kahuraniki Valley behind Havelock North.

Also impressing in a BMW, and first Hawke's Bay pairing home, were Terry and Frank May from Havelock North in their 330ci coupe, the pair finishing eighth overall and half a minute ahead of experienced Cromwell driver Grant Aitken and co-driver Caroline Cullimore in Aitken's new Porsche GT4.

Rounding out the top ten, and winning the Metalman Classic 2WD class, were Wellington pair Chris and Mark Kirk-Burnnand in their older model BMW M3. After an uncharacteristically slow start to the new event the pair lagged behind the similar but more prosaic E30 BMW of Auckland pair Nigel Patterson and Warren Glassford on Saturday.

The Kirk-Burnnands found their mojo on Sunday though, slowly bridging the gap to the Patterson/Glassford BMW before leap-frogging it with a final stage burst to claim back class honours by 11.1 seconds.

Over the two days of competition in the new Targa Hawke's Bay event finishers completed 15 closed special stages covering a total of 192.07km, linked by 309km of transport stages.

As well as the two-day event a one-day Rally of Hawke's Bay tarmac event was run concurrently on Saturday.

That event was won by Hastings driver Nathan Tough and co-driver Greg Browne in Tough's Honda CRX. Christchurch pair Tony Gosling and Blair Read were second in Gosling's Mk 2 Ford Escort, and Karl Douglas and Jeremy Dawson were third in a Subaru WRX.