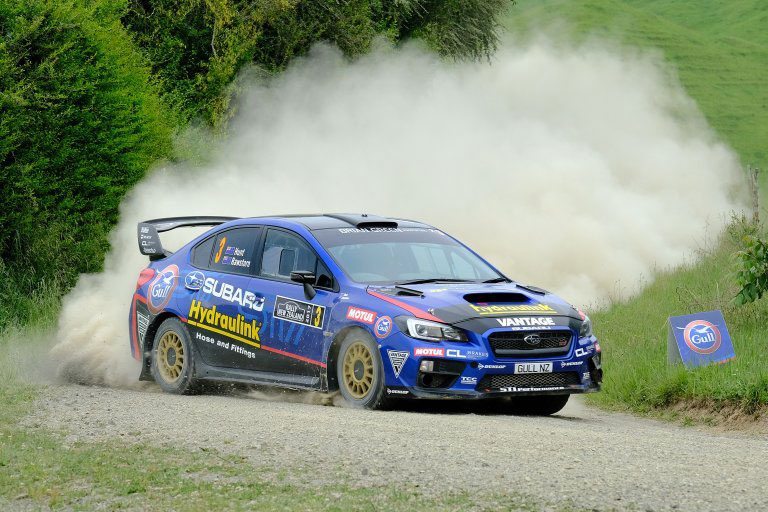 Ben Hunt has helped Subaru to win the Manufacturer’s Championship at the final round of the 2017 Brian Green Property Group New Zealand Rally Championship (NZRC), Rally New Zealand, at the weekend.

The Subaru brand ambassador and his co-driver Tony Rawstorn finished third overall for the season in the Subaru WRX STi after this sixth round, held around the Tauranga region.

Their result, combined with Rangiora Subaru Impreza driver Matt Summerfield finishing second overall in the NZRC gave the brand a total of 138 points and a dominant victory over Mazda (125) and third-placed manufacturer Ford (111).

Since the Manufacturer’s trophy was introduced in 1994, Subaru has now won it 11 times.

Subaru of New Zealand Managing Director Wallis Dumper was pleased to see the brand once again demonstrate its credibility as a producer of fast, consistent, rally cars.

“Subaru has had a long and successful history in rallying, dating back to the days of Possum Bourne, Joe McAndrew and Bruce Herbert. In more recent years, we have seen five-time New Zealand Rally Champion Richard Mason dominate the national scene in Subaru models and now Ben and Matt are continuing our impressive legacy in a WRX STi and an Impreza STi,” Mr Dumper says.

Hunt and Rawstorn had a tough event over Rally New Zealand’s 14 special stages and were thankful to be among the mere 20 cars that managed to complete the 226km route. Dubbed one of the most treacherous rallies of the season, due to the heat causing tyre-wear issues, many of those who did finish, still experienced a multitude of misfortunes.

In Hunt’s case, he received an almost unheard of three punctures on the second pass of the iconic 29km Whaanga Coast stage. The flat tyres hobbled his chances of taking home the NZRC winner’s trophy for the second time.

“The biggest thing was the tyre-wear that many of the teams struggled with and the heat also affected the engine and brakes. But no excuses, it was just one of those rallies where it was good to be able to get to the finish. For us, that was a huge achievement,” Hunt says.

After setting some top five times on leg one, the trio of punctures on the sixth stage dropped Hunt and Rawstorn down the field on Saturday. They fought back hard on Sunday to finish fifth for the day.

“When we last did this event it was in a 2WD, so it was really awesome to compete this time around in our All-Wheel Drive Subaru. The Hunt Motorsports team put in a huge effort to keep us going for the weekend and I want to thank them for all their hard work this season,” Hunt says.

“We proved this year that the Subaru WRX STi has rally-winning capabilities and we will be working on increasing our pace and potential in next year’s NZRC,” Hunt adds.

The pair wrapped up the title by a 10-point margin over Matt and Nicole Summerfield, with Hunt and Rawstorn third on 114 points after one of the most intensely-fought-for titles in years.