Hunt vows to return for next NZRC round - RallySport Magazine

Hunt vows to return for next NZRC round 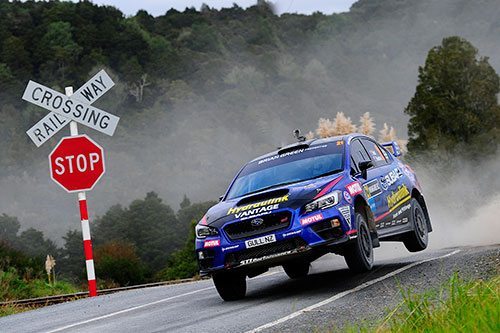 NZ Champions Ben Hunt and Tony Rawstorn’s International Rally of Whangarei came to an untimely end when their Subaru WRX STi left the road and rolled into a ditch.

The Ben Hunt Motorsport team will be hard at work repairing the Subaru WRX STi in time for the next NZRC round. Photo: Geoff RidderFortunately neither driver nor co-driver were seriously injured and despite incurring moderate damage, the STi will be repaired in time for the third Brian Green Property Group New Zealand Rally Championship round at Canterbury in June.

Hunt wanted to extend his gratitude to the competitors who did stop to help him and Rawstorn, plus the NZRC organisers, medical staff and rescue teams, for their assistance after the incident.

He had started steadily in the first three stages but was frustratingly held up by a slower Asia Pacific Rally Championship car for about 16km in stage four. After recording a fourth place time in stage five, Hunt was aiming to claw back up the leader board in the following stage before the scheduled service.

“I wanted to try to minimise time loss in stage six so we were pushing quite hard early on. Then about 1.8km in there is a section of fast corners, where I made a small mistake going in a bit hot and we didn’t have the drive out of it to save ourselves,” Hunt says.

The Subaru WRX STi clipped the inside of a left-hand corner, hit a bank and flipped over onto its roof. It then slid off the road down through a fence and ended up in a ditch.

“We feel grateful to have been driving a Subaru because as a standard production car it has a five-star safety rating. This structural soundness, combined with the longevity of development that has gone into the roll cage, built by Paul Hayton at PBMS, meant we avoided what could have been a more severe incident,” Hunt says.

“It was a real shame as that Helena stage is one of my favourites and in fact we set the NZRC record there last year,” he adds.

As a precautionary measure and given the location of their accident, he and Rawstorn were airlifted to Whangaeri Hospital for assessment. Hunt sustained three fractured ribs and both men had deep tissue bruising.

The STi has taken most of the impact on its left-hand side and around the front wheel.

“Cosmetically it looks worse than it actually is but we are happy with the way it has held up considering the size of the impact. Without having pulled it apart yet we don’t know exactly what is damaged. However, Motorsport New Zealand have inspected the car and given it the OK to continue the championship. My team will be hard at work repairing it in time for round three next month,” Hunt says.

He thanked the rally officials, media, other competitors, sponsors and his supporters for their concern and says the amount of messages he had received this afternoon was truly humbling.