Hyundai chalks up the first anniversary of their R5 car, and looks to touring cars

Sometimes it does not quite go to plan!  The 2016 Ypres Rally saw the first appearance of the Hyundai New Generation i20 R5, and to celebrate the occasion Hyundai’s customer motorsport operation entered their WRC driver, Thierry Neuville, in a gaily coloured car on his country’s premier rally, hoping for a spectacular success.

Tom Cave in action in a customer Hyundai R5.

Thierry was impressive, winning the majority of special stages, but also spectacular when he went off the event on the first day and rolled!

“Hyundai Motorsport customer racing has grown a lot.  It was a challenge to establish the team, the organisations, the car sales, the homologation.  So it was a huge job done by the team and I am very proud of all of them that are working here.  I think we are reasonably going well.” 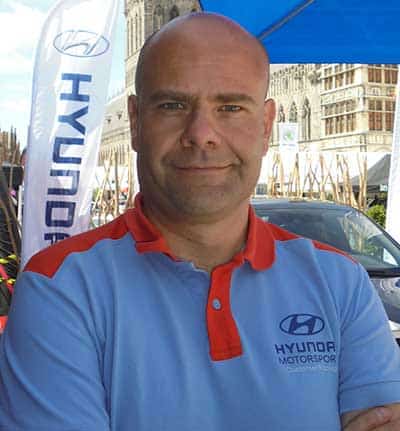 Hyundai's Andrea Adamo. (Photo: Holmes)What do you think about the R5 world generally? Already around 30 Hyundai R5s exist and in Ypres no fewer than a total of 34 R5 cars took the start, a huge numbers of Skoda Fabias and Ford Fiestas, just a few Citroens, Peugeots and your cars.

“I speak just for Hyundai.  We found ourselves in a very tough market where cars of our competitors have been around much longer and whose customer racing activity is already very well settled down and known by everyone.

“I think we have done a nice job having five cars on this rally for us, in just one year making a competitive R5 car and to show that Hyundai Motorsport customer racing is a credible operation.   We are continuing with this design apart, of course, from introducing paddleshift systems which will be allowed from next year (2018).

The R5 rally car is not the customer division’s only project.  Their proposed involvement with the TCR series is another.

“It is on-going, good to work on this brand new car, the i30.  There is a lot of expectation from everyone at Hyundai because work on the i30 is increasing the sporty image of Hyundai. 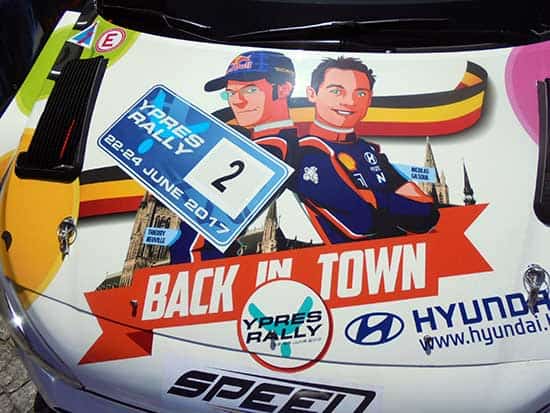 Compared with the Fabias and the Fiestas, what are the strong points of the NG i20 R5?

“For me the rules are not allowing us to make so many different things between cars so I can hardly see any stronger point or bad point against the other.

“I can tell you the good things about i20, very good in terms of suspension, weight balance, and the engine is really a very strong factor of our car, and we keep pushing the organisation behind it every day.

“My job is to keep the business in customer racing alive.  So far I have to work hard with my people to establish R5, to make a very nice car in TCR and a competitive one.  Normally I take things step by step.  As they say in Africa, the only way to eat an elephant is slice by slice, so let me cut it in slices.  We’ll see what is going to happen in the future.”

“WRC 2017 cars and the R5 cars are so different, but the image showing that the technical group of people that are working in Hyundai Motorsport is very high level and the personnel are the same.

“I think that is very good for everyone in Hyundai Motorsport.  The WRC is going well, it is a good image for everyone.

“Let me live with the present, with some future in mind and we’ll see what the future will bring.”