In a chaotic final day at ADAC Rallye Deutschland, Neuville climbed from third after first Jari-Matti Latvala and then Kris Meeke crashed out of the lead.

The win on this ninth round of the FIA World Rally Championship was the first for Hyundai in its debut year back in the series. Dani Sordo added icing to the cake by finishing second for the Korean manufacturer.

Twelve months ago Neuville came close to victory in Germany as he and Sordo fought a final stage duel when driving for different teams. Sordo won on that occasion to secure his first win when Neuville slid off just before the finish.

Neuville’s story began on Thursday morning when he barrel-rolled through the vineyards near Trier. Team mechanics worked for 18 hours to rebuild the battered i20 car and Neuville repaid them in style, becoming only the second Belgian to win a world rally and the first since François Duval in 2005.

“I think we did an unbelievable job during all three days of the rally and I can only say thank you to our team,” he said. “They did a fantastic job after our roll on shakedown and I couldn’t believe we could do such a good result. We put pressure on the others and it paid off.”

Latvala, chasing his first asphalt win to reignite his title bid, was almost a minute clear when he started the first of the final four stages in the vineyards on the banks of the Mosel River.

However, he crashed his Volkswagen Polo R in treacherously slippery conditions, handing Meeke an 8.4sec advantage over Neuville. But the Northern Irishman hit a wall early in the next test after a recce pace note error, ripping the left rear wheel from his Citroen DS3. 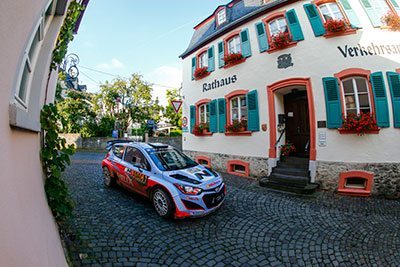 Neuville, who admitted dropping two wheels into a ditch in the opening stage, was in the clear and finished 40.7sec ahead of Sordo. The Spaniard enjoyed a clean run on his first rally since May, aside from a sixth gear spin yesterday after aquaplaning.

Mads Østberg was sixth, admitting he failed to get the best out of his DS3, with Martin Prokop and Dennis Kuipers in seventh and eighth. WRC 2 winner Pontus Tidemand finished ninth with Ott Tänak completing the leaderboard.

Robert Kubica retired before the opening stage when the gearbox in his Fiesta RS jammed in third as he warmed his tyres while Bryan Bouffier crashed his i20 early in the final test.

Despite retiring after two crashes, Sébastien Ogier’s retains a 44-point lead over Latvala in the standings. Although a wretched weekend meant it failed to clinch the manufacturers’ title, the results guaranteed a Volkswagen driver – Latvala, Ogier, or Mikkelsen - will win the drivers’ crown.