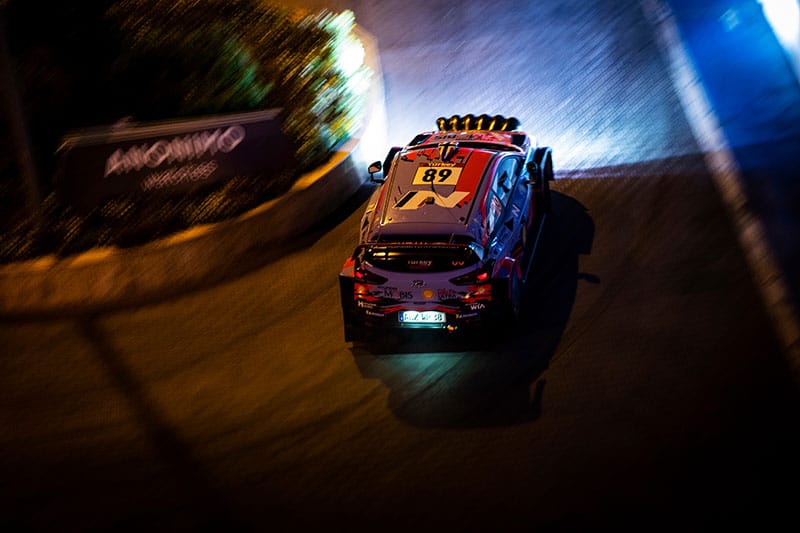 Andreas Mikkelsen and Thierry Neuville share the lead of Rally Turkey after the opening super special stage on Thursday night.

Mikkelsen set the benchmark time in his i20 after outpacing early leader Pontus Tidemand. The Norwegian remained on course for the stage win until Neuville stopped the clocks on the very same tenth.

Despite his pace Mikkelsen was not totally satisfied.

“It wasn’t a great stage by me but it was OK. I could have been faster in some places, but the rally can be lost here as well. We have a long day tomorrow and that is where the proper action starts,” he said.

His Belgian colleague was relaxed and smiling at the stage end. “I’m on a combination of hard and soft tyres and some of the drivers had really scrubbed their tyres. I expected to lose time but I pushed really hard and did a good stage,” said Neuville.

Thousands of fans enjoyed a spectacular firework display ahead of the 2.00km curtain-raiser to this 11th round of the FIA World Rally Championship alongside Marmaris marina.

Tidemand eventually finished third in his Ford Fiesta, 1.6sec adrift of the flying Hyundais. Sébastien Ogier was a tenth behind in fourth in a Citroën C3, 0.3sec clear of this morning’s shakedown winner Kris Meeke in a Toyota Yaris. Esapekka Lappi completed the top six.

The action continues on Friday with a gruelling leg which contains more than half the event’s competitive distance.

Crews tackle two identical loops of three tests, including the 38.15km Çetibeli, the longest of the weekend. They add up to 159.14km and service in Asparan divides the two groups.

30 years in the making: RallySport Magazine – a brief history