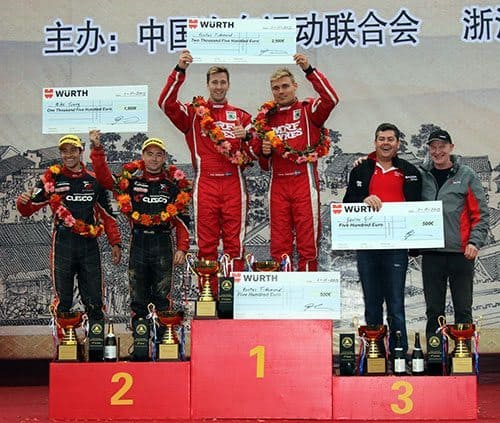 The International Rally of Whangarei is the first round of the FIA Asia Pacific Rally Championship (APRC) that takes the teams from New Zealand, to Queensland in Australia, on to China, Japan and Malaysia, with the final round in India in December.

The teams and drivers are chasing the prestigious FIA APRC Drivers’ and Manufacturers trophies plus the FIA Asia Pacific Rally Cup powered by Würth; a competition open to all drivers entered in the international events regardless of how many APRC rounds they compete in. The winner of each rally receives US$1,000 from the Würth Cup prize-pool and at the finish of the championship in India, the top three drivers will be awarded the coveted silver trophies that will be on display in the Würth tent at the Whangarei Toll Stadium service park.

Würth’s support goes much further too, providing funding for the television coverage and at each event supplies APRC teams with boxes of their high quality chemical products.

After three years of working closely with the engineers and mechanics that build and maintain the cars, Würth has refined the list of products to an ideal ‘must haves’ for any professional rally team. It’s a comprehensive list that includes everything from multiple cans of brake, glass and hand cleaners, silicon and contact sprays, paper-rolls, gloves and cable ties.

This is backed up by the top teams in the APRC, “Rallying is a great test bed for any product and over the past three years the partnership with the APRC and Würth has resulted in big benefits for both parties. Würth staff attend each event to provide the teams with technical advice, while at the same time they are coming to us for feedback on their products”, said Lindsay Hegan, Racetorque MRF Skoda team manager.

David Paterson from Würth New Zealand is equally enthusiastic, “The partnership with the Asia Pacific Rally Championship is now in its fourth year and New Zealand has been privileged to be the opening round in each of those years. Working with the APRC and especially directly with the teams who use our products and tools at the cutting edge of technology, often in extreme conditions has been a great experience for all Würth staff. Team spirit, willingness to perform and to give one’s best  are important factors in rallying, similar values also determine the corporate culture of the  Würth group”.

The International Rally of Whangarei is the opening round of the 2016 FIA Asia Pacific Rally Championship starting on Friday 29th April.

The event is based from the Pacific Ford Service Park adjacent to the Toll Stadium on Port Road where each day the teams can be seen tuning and preparing cars for the 275 kilometres of competitive stages that make-up the event.