Interview: Neil Allport – a rally star before Possum and Paddon

Before Hayden Paddon, or even Possum Bourne, New Zealand rallying’s big star was Neil Allport – a driver whose full-on, attacking style made him a real crowd favourite. Allport made his name in the 1980s at the wheel of Ford Escort RS1800s and Group B Mazda RX7s, before moving into the four-wheel drive era in a Mazda 323. A three-time New Zealand Rally Champion, Allport has been retired for some years, but is still closely involved in the sport in many ways. Peter Whitten chatted to the Aucklander about a career that’s well worth remembering. * * * * * RSM: You were the biggest name in NZ rallying before Possum Bourne came along. Did you compete much in the same events and in similar cars? Neil Allport: It’s interesting you ask that question. Possum and I started competing on the very same day. It was a hillclimb back in 77/78 and we both had Mk 1 Cortinas, mine with a 1600 push rod engine and his a Rover V8. We did events together up till 1983, both running around at the top of the events we did. 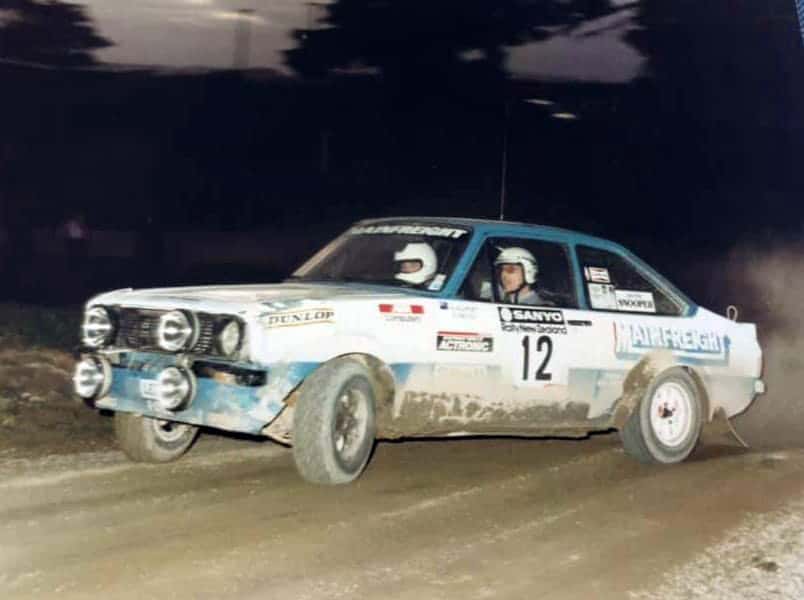 RSM: In 1985 you moved from a BDA Escort to a Group B spec Mazda RX7. What was the reason for the change in car? NA: In ‘84 Rodger (Freeth) and I teamed up. It was a chance meeting at Western Springs 83/84.  I was driving a midget that season that a friend had leant me. He said if I was looking for a co-driver he was interested. I was starting to win rallies, in fact the first event we did together we won, and I had turned the corner so to speak. I went from winning stage after stage to still being there at the end and winning the rally. That same year competing in Rally NZ we ran as first Kiwi and inside the top 10 until the start of day three when the engine gave up. That was the start of Group B, so we needed something much more up to date than the Escort. I did a TV interview that night and was asked ‘Where to now for Neil Allport?’  It was a good question, but I had no idea of the answer. An hour after that had run on TV I had a call from Bruce, the head of Mainfreight, asking what did I need to move forward, and the rest is history. The Mazda seemed to me to be the most cost-effective car. It was still 2WD, but I could build it myself, so with 300bhp, weighing just 900kg and driven well, I was going to back myself. 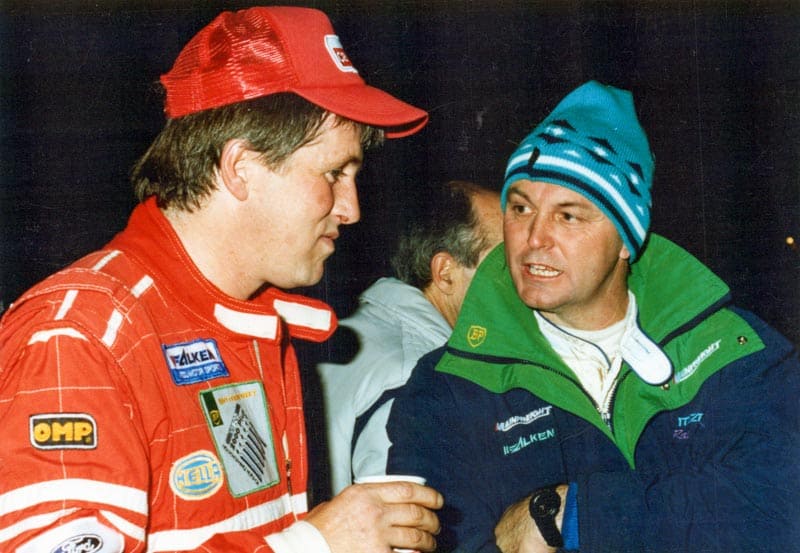 RSM: Perhaps your best result was 6th outright in the 1986 Rally of New Zealand in the Mazda RX7, against all the European Group B monsters. What do you remember most about that event? NA: Apart from the result, the support of the viewing public. It was indescribable. Allport’s all-out style captivated the fans on that 1986 event, including me. I was only a youngster at the time and spectating with my dad and a few other Aussies who had made the trek across the ditch. Near the start of a stage, Allport appeared in the RX7, went off the road and demolished the solid earth bank we were standing on. The only reason I survived was that a friend literally picked me up and threw me into the trees! 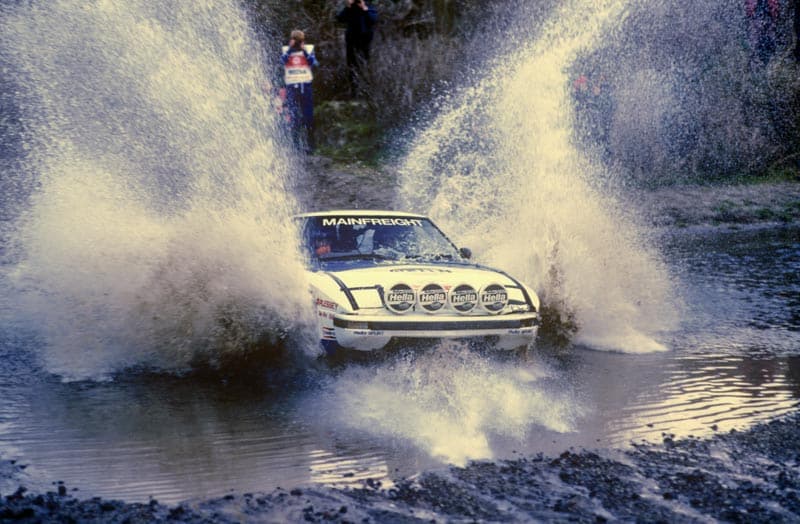 Neil Allport powers through a water splash during the 1986 Rally of New Zealand. Photo: Martin Holmes

RSM: How you missed me, and how you didn't crash out of the rally there and then still amazes me. Do you have any recollections of this? NA: Haha. I was like a cat with nine lives in ‘85 and ’86. I had a bunch of moments, but it was like Rodger and I just couldn’t get it wrong. I remember backing into the crowd in Wood Hill in ’85 – that was a close one, but thankfully no-one got hurt. There were lots of great memories with that RX7. 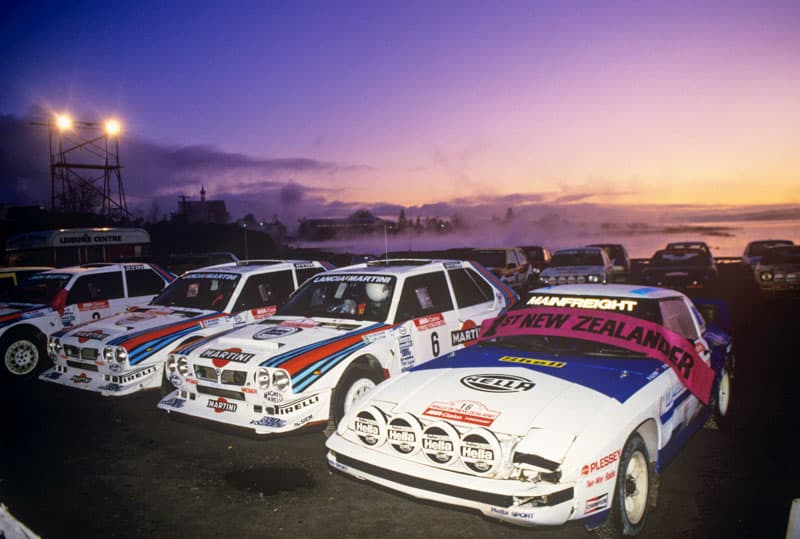 Being "1st New Zealander" in the WRC rally has always been a big thing for Kiwis. Allport's Mazda RX7 among some illustrious company in 1986 – a trio of Group B Lancia Delta S4s. Photo: Martin Holmes.

RSM: You stuck with Mazda into the Group A era with 323s. Did you have much support from Mazda at the time? NA: Mazda came on board three events into running the RX7. We started running the car with a four-speed gearbox. We couldn’t  buy a 1-1 five-speed box as the factor cars in Europe owned them all. But it was very clear to Mazda here in NZ that if I could get hold of one that it was going to make the car much more competitive. Robyn Curtis, ex-Motor Action but sadly passed now, was head of marketing at the time at Mazda, and he pushed the Japanese for support of which we got. Now we had the whole package and that support ramped up when Group B was replaced with Group A and the 323 4WD. 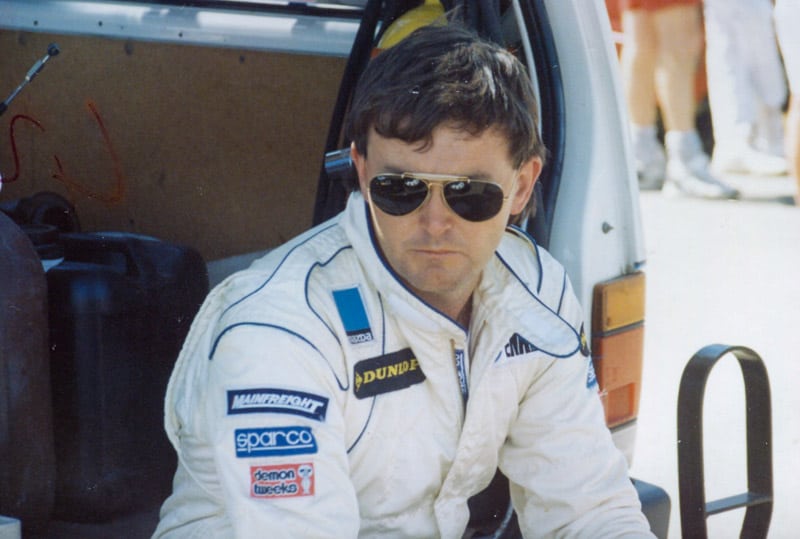 Neil Allport event headed to Australia to contest events such as the Dunlop 2GO and the Rally of Canberra. Photo: Peter Whitten 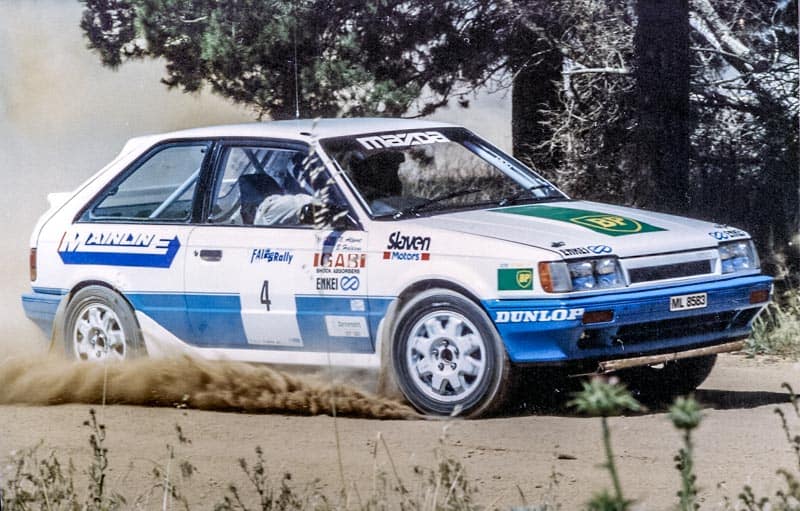 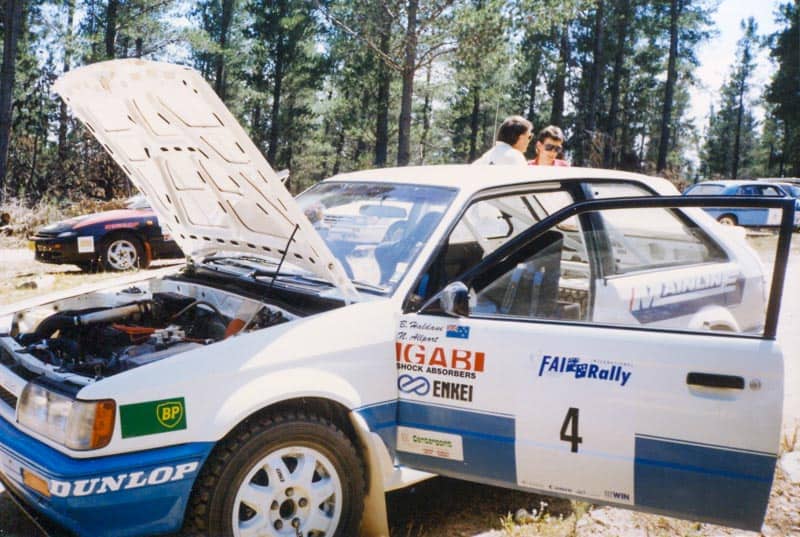 Neil Allport contesting the Rally of Canberra (top) and chatting to RSM's Peter Whitten in the early 1990s.

RSM: The 323 was always fragile, but you won three NZRC titles in Mazdas (two in the RX7). Which was your most memorable and hard fought championship win? NA: All championship wins are memorable, so it’s the first one if I have to pick one. It was in the RX7 and we won every rally bar the first, which Malcolm (Stewart) won in the Audi. 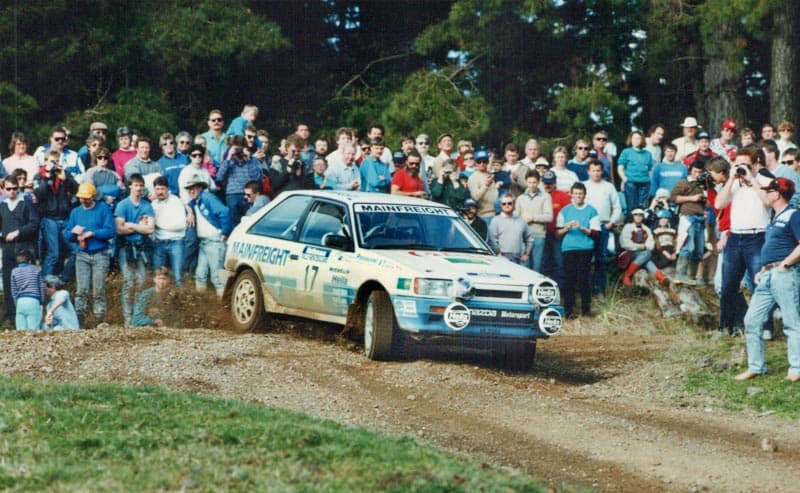 Allport slides his Group A Mazda 323 through one of NZ's most famous rallying corners, in the Maramarua Forest in 1989. Photo: Geoff Ridder

RSM: You had a 'works' drive in the '95 international in an Escort RS Cosworth. Was this a paid drive, and what memories do you have of the car and this event? NA: For me that was the icing on the cake of my career. To be asked to drive for the factory Ford team was just a dream come true. I think there was a very small cost, but not from me. I had not driven for 18 odd months, so had no co-driver. I have to thank Gary Smith for putting my name forward, and it was Gary that suggested I get in touch with Craig Vincent regarding a co-driver. Craig then pulled together some funding, but I had the drive regardless of the money. It was always going to be an event where I was expected to be a team player*, and finishing was expected. It was NOT the event to relaunch my career! * His team-mates were Francois Delecour and Bruno Thiry. It was my first time in a LHD car and I had to finish …  there was a bit to think about. I was very happy to get the result that Ford wanted. To score points and to be a part of the factory team environment was fantastic. It’s not hard to see when you can get yourself to that level how quickly you can move forward. 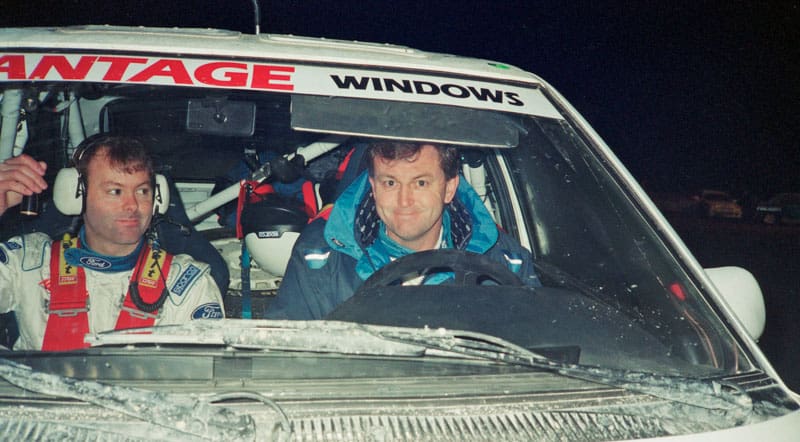 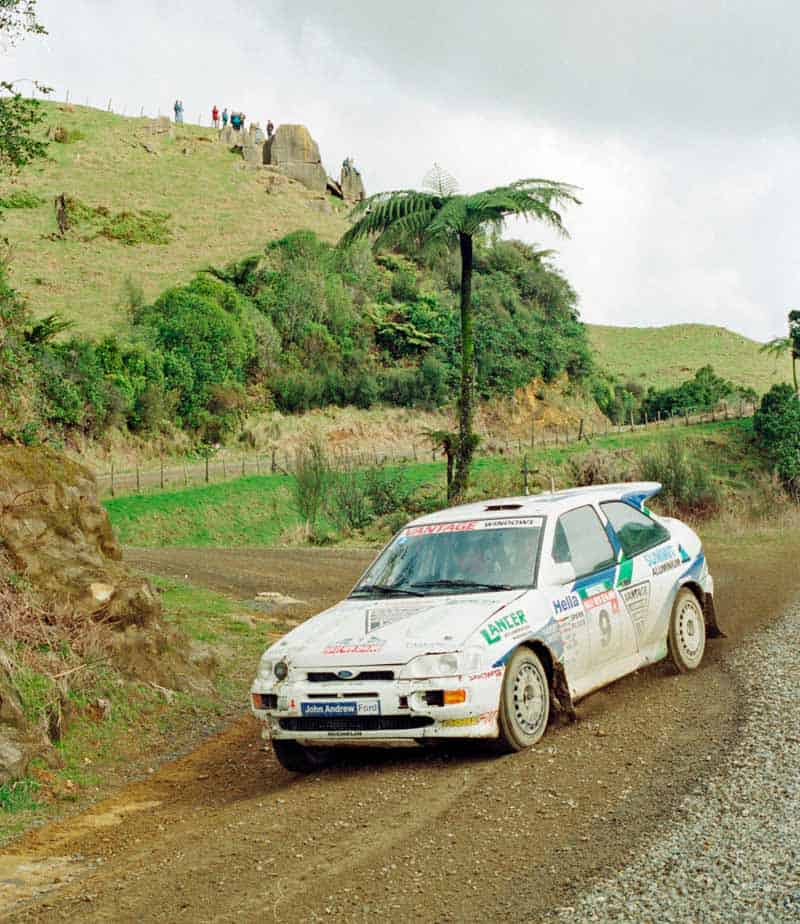 A top eight finish in the 1995 Rally of New Zealand showed Ford's faith in Allport was warranted. Photo: Martin Holmes

RSM: Was the RS Cosworth next level compared to what you had driven before? NA: That goes without saying. Anyone that has been lucky enough to drive a factory car will know what it’s like. I have an R5 Ford Fiesta and it’s the same, you just can’t build a car like that in your garage. It’s not possible. RSM: You then retired. Why? Was it a lack of sponsorship or had you lost the desire? NA: I had stopped driving full time the end of ‘93, Mainfreight was growing massively as a company and they had decided that there was not much more we could do, and I couldn’t disagree. I needed to start to think about life after rallying. I had a young family so it was time to call time on driving, and put what I had learnt into a business. 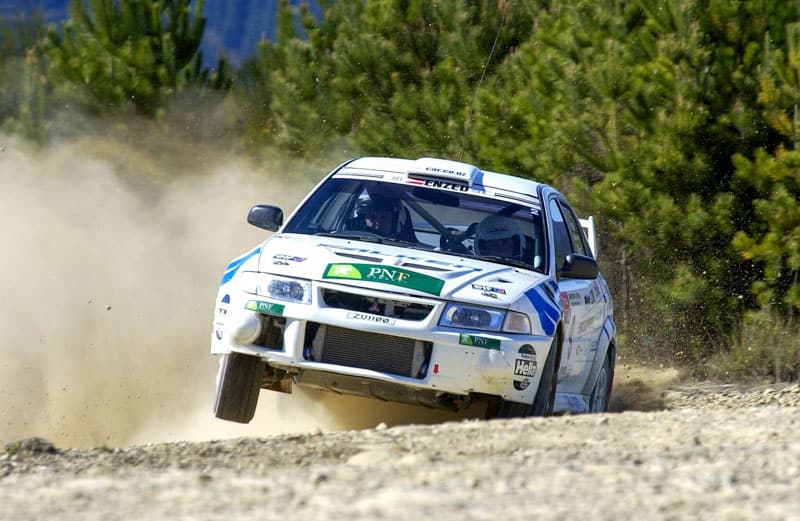 Neil Allport never lost his 'all out' approach to rallying, as seen here in a Lancer Evo.

RSM: Since then you've made a few appearances, mainly in Escorts. Do you still get the same thrill from rallying? NA: I still love getting out and driving when time allows. I’ve been doing that with my son, Richard. We have a great time together, lots of fun. I’m still far too competitive and my own worst enemy, but age has pulled me back a bit … lol RSM: Can you see yourself competing more in the future? NA: Just for fun. 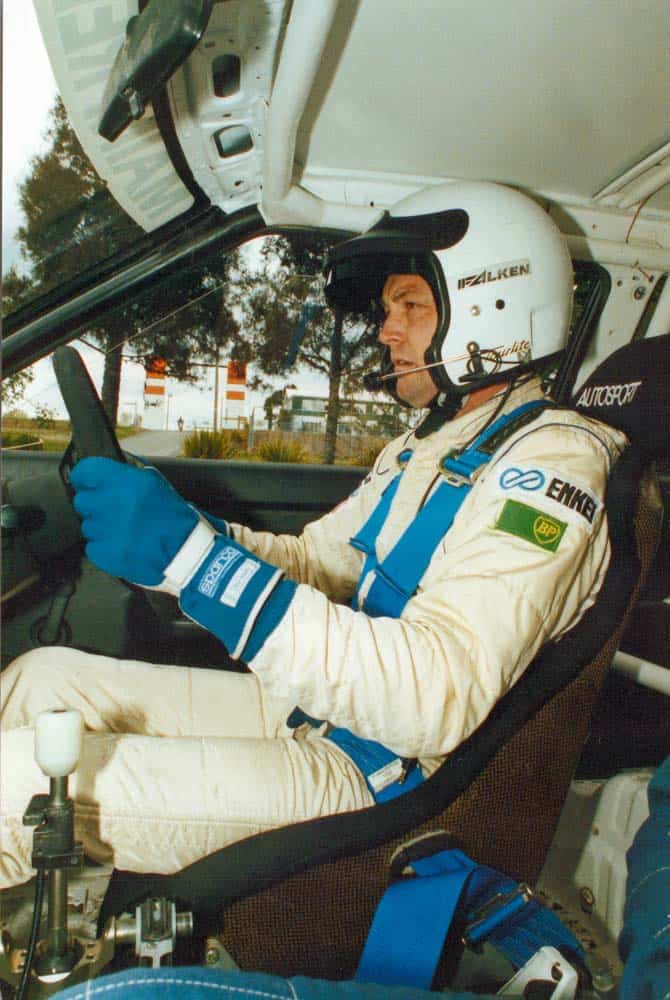 Neil Allport behind the wheel of his Mazda in the Group A days. Photo: Geoff Ridder 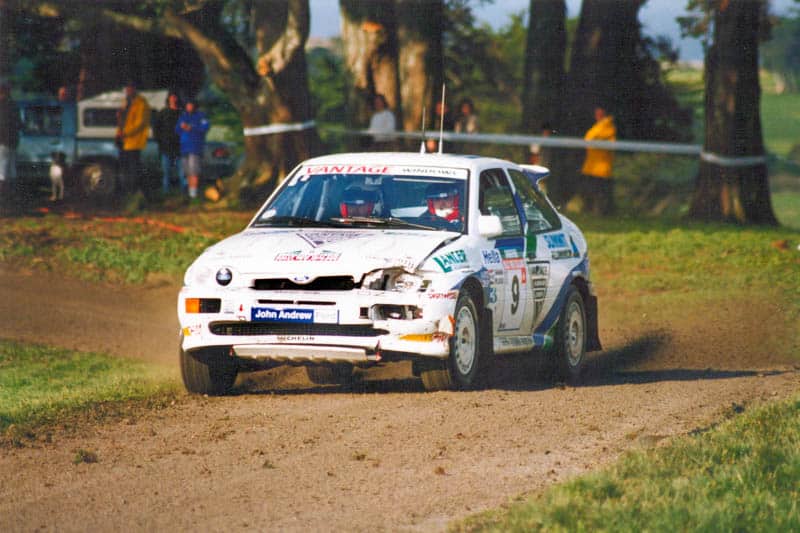 Driving for the Ford factory team in 1995 was one of the highlights of Allport's career. Photo: Geoff Ridder

RSM: Finally, if you were to give a young Kiwi rally driver one piece of advice, what would it be? NA: What a question! I’m old school, so sorry. Want it more than the other guy. Don’t make excuses when you get it wrong – learn from it. If you make mistakes, then own them. And don’t write your own social media stuff, let your results speak for themselves. • Neil has been running Neil Allport Motorsports since 1986 as a major motorsport parts supplier in New Zealand. 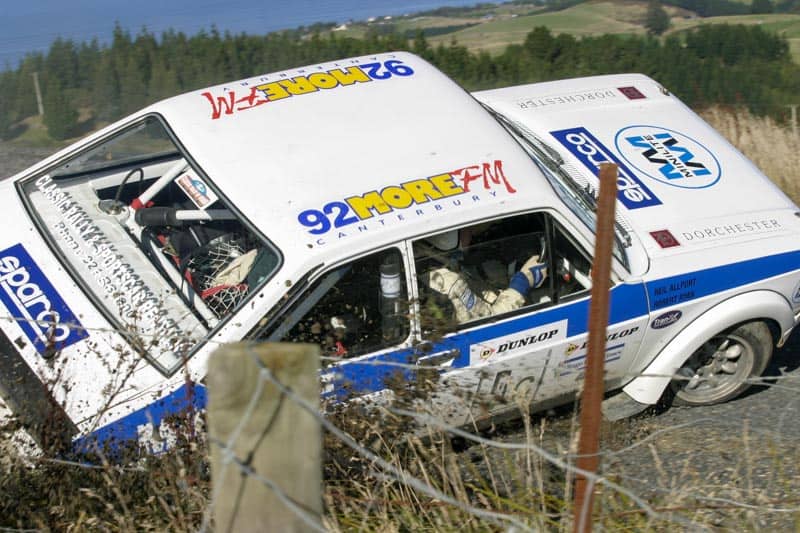 Always the fan favourite, Allport pushes an Escort to the limit in the Otago Rally in 2005. Photo: Peter Whitten 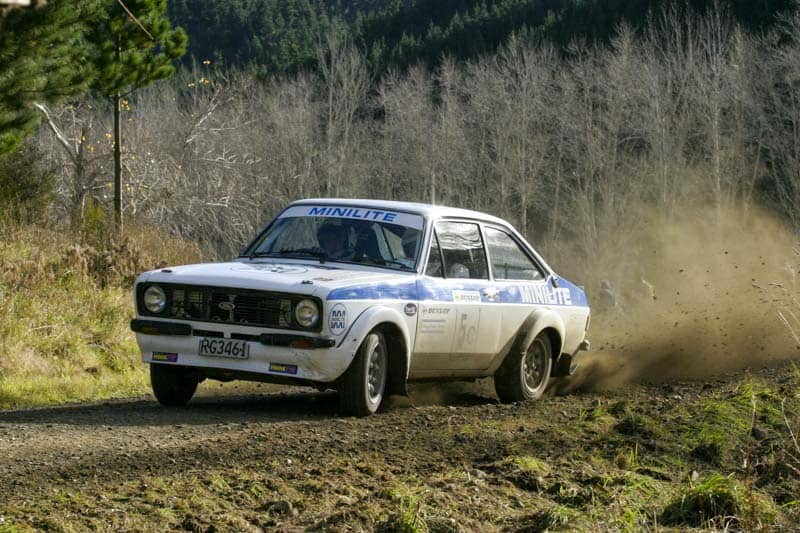 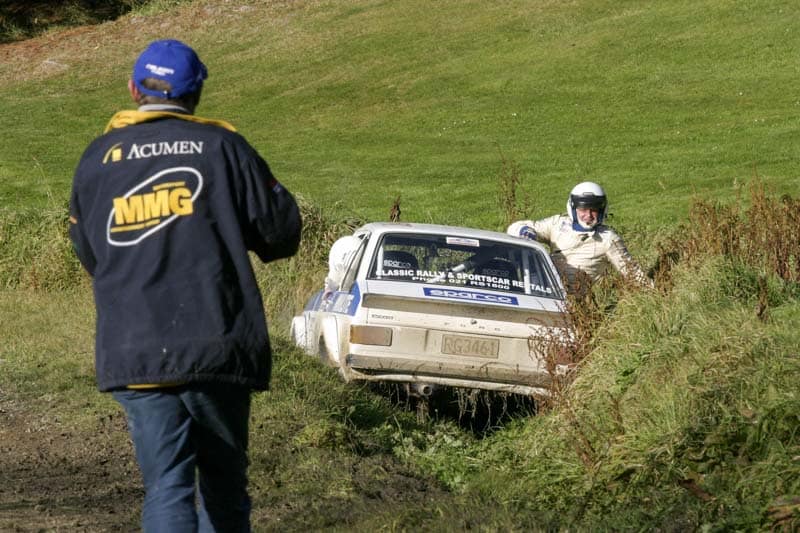 This off into a ditch in the Otago Rally had Allport more than a little amused. Photos: Peter Whitten 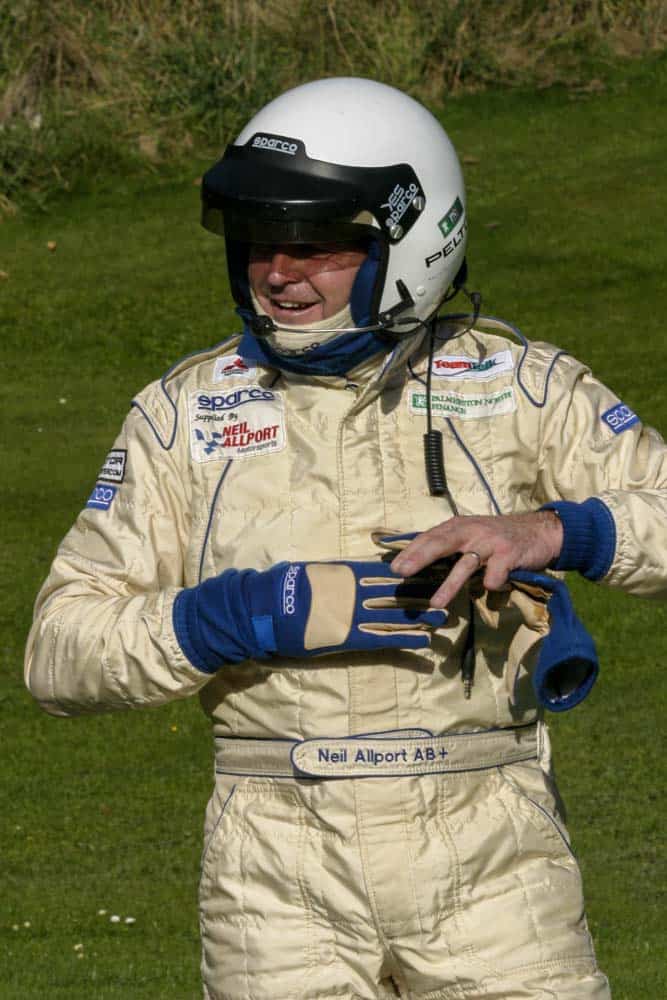 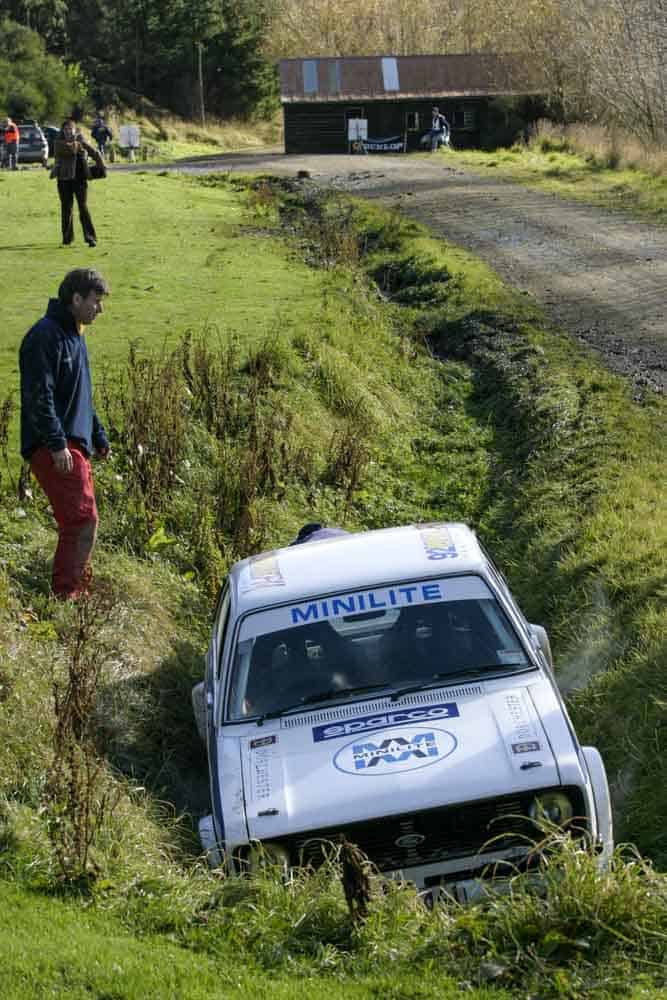 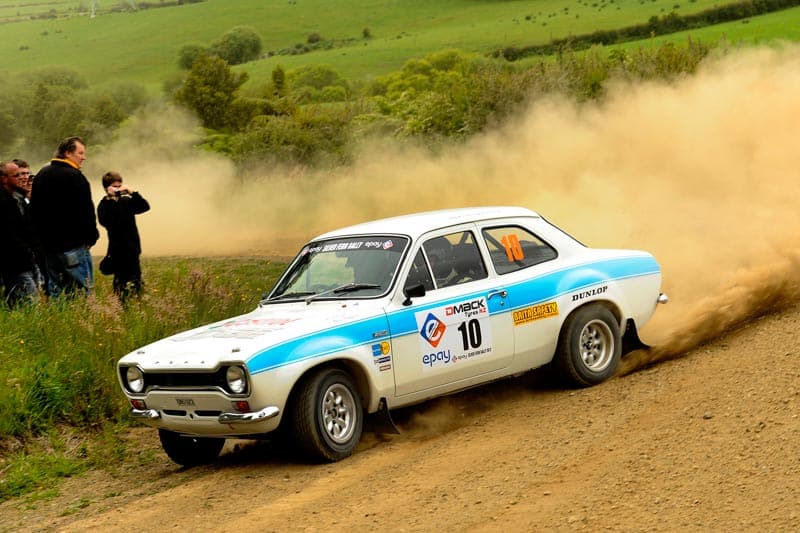 Behind the wheel of a Mk1 Escort on the Silver Fern Rally. Photo: Geoff Ridder 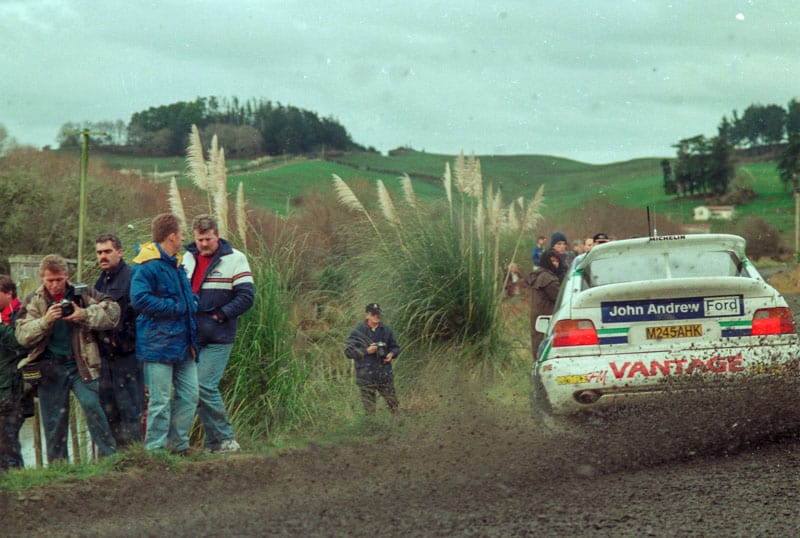 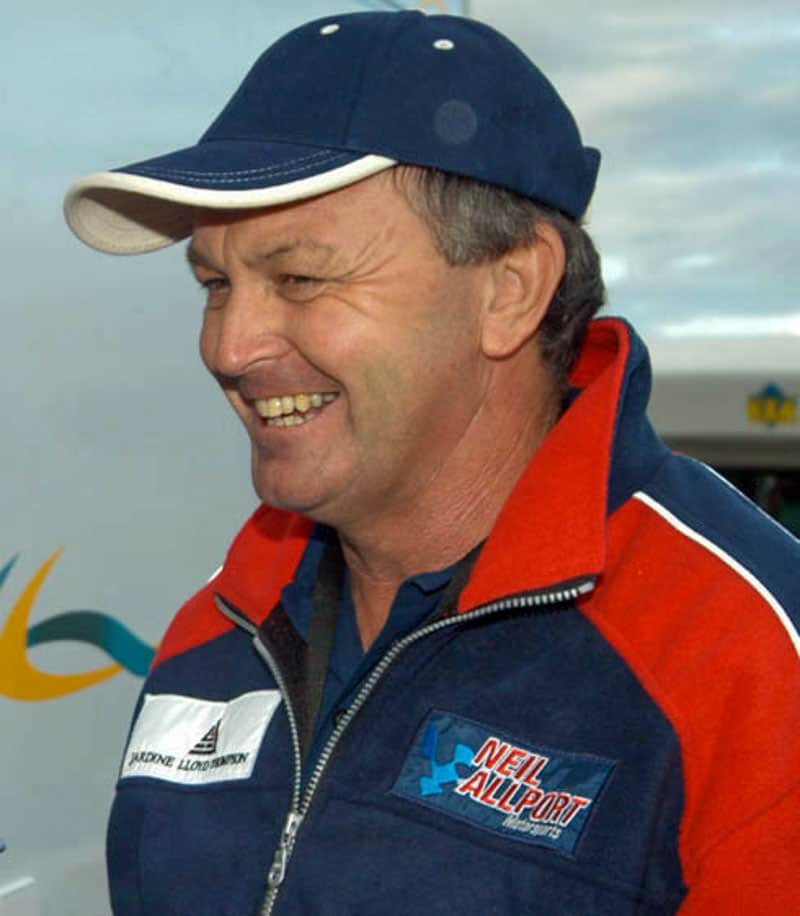 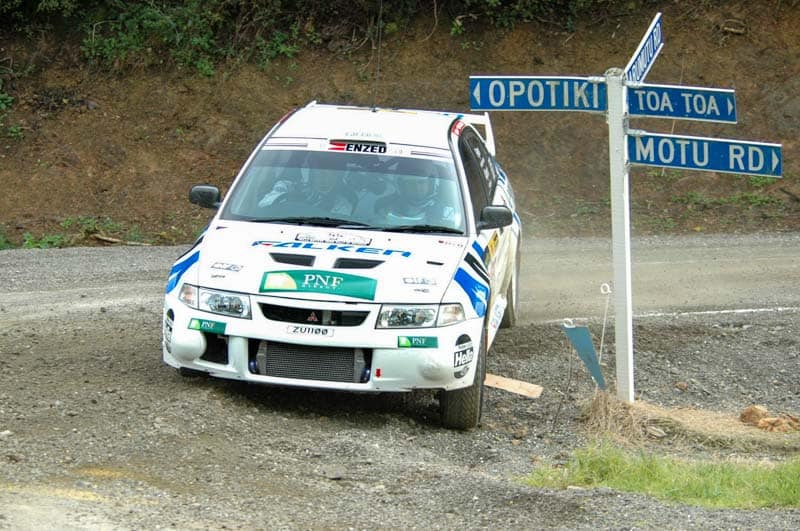 Any future drives from Allport will be "just for fun" he says. Photo: Geoff Ridder