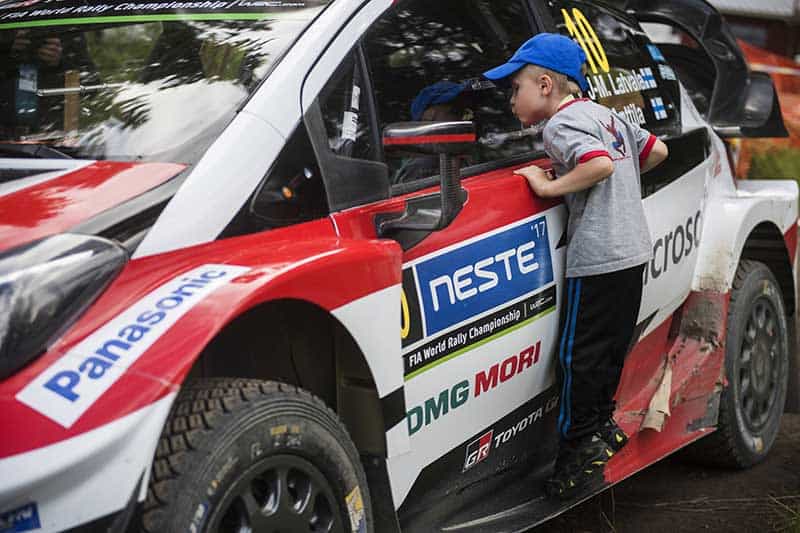 Toyota Gazoo Racing’s rallying Team Principle, Tommi Makinen, was speaking in the service park at Deeside before the start of Wales Rally GB 2017 about the various changes coming to his team.

The most immediate at WRGB was that this was to be the final WRC event at Toyota Gazoo Racing for Juho Hanninen. We asked Tommi for an appreciation of Juho’s work with the team.

His reply: “It was like our original plan. We wanted him to take on the massive test programme as we developed the car, there was to be a massive amount of mileage.

“It was agreed that as this year was our learning year, I also wanted to have him to drive the whole championship to bring the experience and the knowledge from the testing to the rallies, and how we could improve ourselves for 2018. That was the project and he did absolutely brilliant work, also doing pretty well on the rallies himself.

“I have said he will always be part of the family, but we haven’t discussed this very much, whether we keep him as a test driver and help develop the team and the car, speak with drivers and share that information with drivers.

“I think we could find out quite a lot from him. At the moment it is more or less whether Juho likes to continue.” 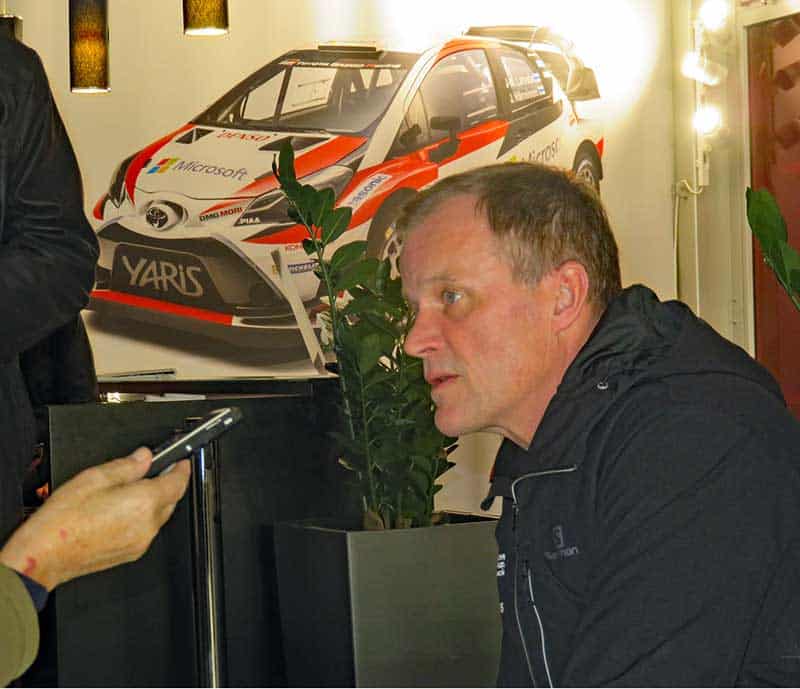 Martin Holmes: Next question, it has been announced that Juho’s co-driver, Kai Lindstrom, is going to be the new Sporting Director of Toyota Gazoo Racing, the job that Jarmo Lehtinen had before. What will be Kai’s work?

TM: “We have just been in the WRC now for one year, learning our operation. Now we know far more about the different areas, how they could be done and keep improving.

“I would like to say that our overall operation is already very efficient in many ways, but now I think it is a good moment to discuss again what we are doing, how we keep improving and what are the roles of the different people.

“‘Sporting Director’ means he is looking after working closely with drivers, organisers, FIA and these areas, and make sure that all information is where it is needed, but it is only World Rally Car work.”

MH: What are you going to do with Jari-Matti (Latvala) to give him a car in which he will finish rallies?

TM: “I hope he manages to kick his bad luck away! It’s been amazing, I don’t understand, such strange things have happened. Okay, Spain I would say was our first own mistake, the test condition was not quite perfect which caused this trouble, there was some wrong setup with the car.

“But all these little difficulties like he had in Finland, Germany!!! Absolutely strange things …” 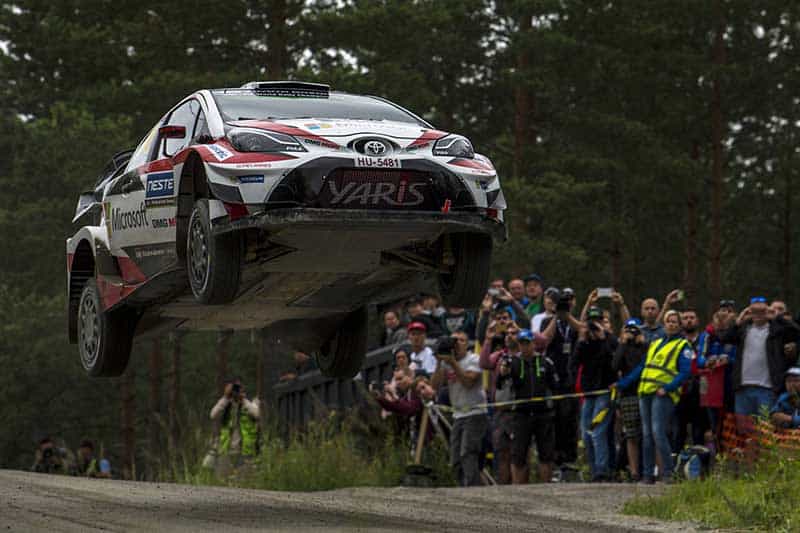 Toyota’s speed this year has surprised many.

MH: What will be the position at Toyota Gazoo Racing for Ott Tanak next year?

TM: “I have informed our team that our target is to do our best to supply the best cars for all our drivers and we try to make our best for all of them. So I would say all of them are handled the same, so we can produce our maximum effort for results.

“I think Ott will start driving our car some time in December at a Monte Carlo or maybe a Swedish Rally test.”

MH: Ott will be the first a non Finnish driver in your team. Is this all part of TGR’s expansion plans?

TM: “We have quite a few Estonian people already in the team and we have some smaller parts of operation there. Regarding Ott, I had already wanted Ott driving for us this year, but he was contracted with M-Sport. 2018 was first possibility to discuss a contract.” 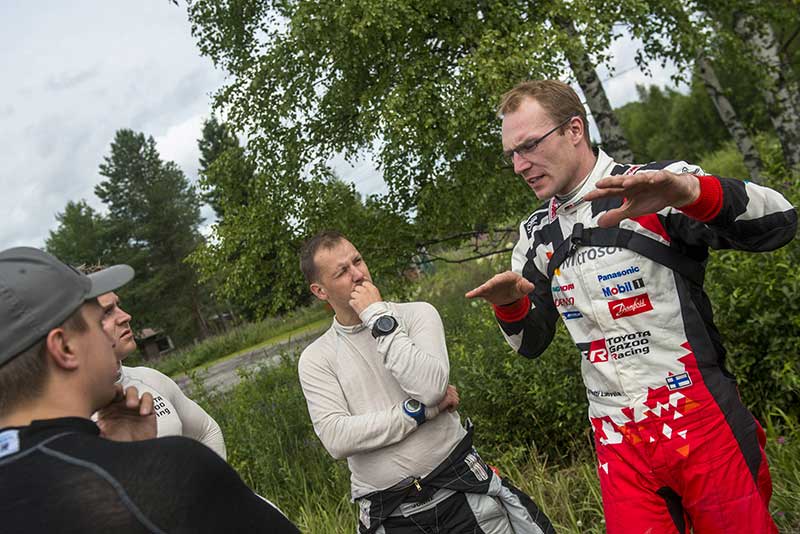 Jari-Matti Latvala has been fast, but has suffered some terrible luck in 2017.

MH: What technical changes on the car are planned for next year?

TM: “There are some little things. One of the things which can be noticed are our new aero package will be from Monte Carlo, nothing more complicated than it is now!

“I think the front will now be more open, basically to give better cooling. I also think it will give better aerodynamic to the front, which makes the car pretty equal aerodynamic-wise, which should improve the car a bit.

“They are basically not such massive things but it will make it easier to service. For example, our front splitter has to be pretty low to be effective aerodynamically. Our current front bumper is one-piece, so when you destroy the lower part you need to change the complete bumper.

“Now it will be in separate pieces so we need only change the lower part instead of changing the whole item. It will also make quite a big saving in money!”

MH: Thinking about the first 11 rallies of the year (up to Catalunya), what has been the best memory, Sweden?

TM: “I think I would say Sweden and of course already in Monte Carlo we had Juho setting the first and very fast time, and straightaway it was special event.

MH: Final question, are you planning any other project beyond World Rally Car?

TM: “We’ve been discussing R5. We can see that R5 is a very interesting world. We would like to see Toyota R5 cars also for customers use. Our target is to develop it at the same level as we did our World Rally Car project.

“As to time scale, it depends when a suitable production based car becomes available.”