However, he didn’t have things his own way. Running second on the road behind team-mate Sebastien Ogier, he too had the unenviable task of sweeping the slippery gravel and sand from the road ahead.

It was therefore little surprise that the cars running further down the start order showed the quickest pace on the opening loop of four stages.

The Hyundai pairing of Thierry Neuville and Juho Hanninen – running seventh and 12th respectively – traded places at the top of the leaderboard on the first three stages. 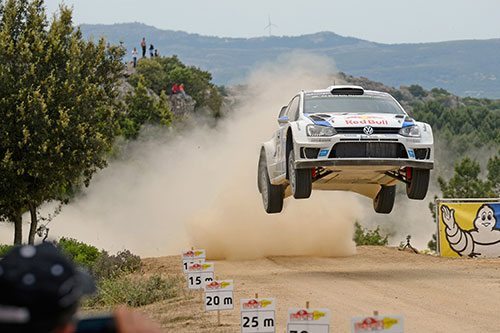 But their hopes of victory were dashed on the final stage of the morning at ‘Loelle 1’ when they both hit trouble. Neuville suddenly stopped 4.1km into the 27.3km stage with damaged front-right suspension. He repaired the damage by the roadside, but dropped 23 minutes. He was out of the hunt.

Hanninen meanwhile, lost his place at the top of the leaderboard in more spectacular fashion. The Finn rolled his i20 WRC into the undergrowth on SS5 and the damage was too severe to continue.

With both Hyundai’s in trouble, Latvala launched an attack on the rally lead. His stunning stage time on SS5 allowed him to jump from sixth place into the lead. And that was where he stayed.

“It’s been a good day,” he said. “We had brake problems on the first stage this morning but it’s all gone well since then. I need to stay cool and keep the same speed tomorrow.”

Ogier’s journey to the top of the leaderboard was almost as impressive as Latvala’s. The Frenchman’s stage times improved dramatically on the cleaner roads in the afternoon and he stormed from sixth place at the midday point to second place after the final stage.

“I couldn’t go any faster today,” the world champion explained. “I’m going to continue to push tomorrow for sure.”

Third place went to Citroen’s Mads Ostberg at the end of the last stage. He had a consistent day but his pace reduced when his team-mate Kris Meeke retired on SS5 with a loss of battery power.
Robert Kubica kept out of trouble to guide his Ford Fiesta RS WRC to fifth place

Ostberg had to drive with the added pressure of knowing he had to bring home some valuable manufacturers’ points for his French team and that meant he didn’t take any risks.

Volkswagen’s third Polo R WRC, driven by Andreas Mikkelsen, finished in fourth place and within striking distance of Ostberg’s Citroen heading into the second day, while Robert Kubica and Elfyn Evans gave M-Sport something to smile about by completing the top six. Malcolm Wilson’s team had lost Mikko Hirvonen’s Ford Fiesta RS WRC in a dramatic fire earlier in the day.

The top ten was rounded out by privateer drivers Martin Prokop – who ran as high as third earlier in the day, Henning Solberg in his Ford Focus RS WRC and the WRC 2 Fiestas of Rajhi Al Yazeed and Nasser Al-Attiyah.