Molly Taylor and Subaru Australia will return to the Australian Rally Championship this year with a lighter, more powerful WRX STI that they hope can bring them another national title.

Molly Taylor and Bill Hayes sign posters for fans at Rally Australia. (Photo: Geoff Ridder)Following its triumphant return to rallying in 2016, the Subaru do Motorsport team are ready to go in 2017 with the championship-winning duo of Molly Taylor and co-driver Bill Hayes.

Their All-Wheel Drive WRX STI is being built to the Production Rally Car (PRC) rules, which allows less technical restrictions than the Group N class pursued in 2016.

“I’m really excited by the changes and the challenges that 2017 offers,” Taylor told RallySport Magazine.

“The change from Group N to PRC will allow us to build a lighter car, increase the size of the turbo restrictor, and install a sequential six-speed gearbox and a pedal box to the car.

The new car is being prepared by Launceston-based Les Walkden Rallying (LWR) and will compete in the expanded six round series that begins next month with the Eureka Rally, in Ballarat, Victoria (March 17-19).

“The team are working very long hours to get the new car finished, and I’m looking forward to testing it in a few weeks time,” Taylor added.

“At this stage we won’t know how much lighter the car is until we get it on the scales, but I can’t wait to drive it.” 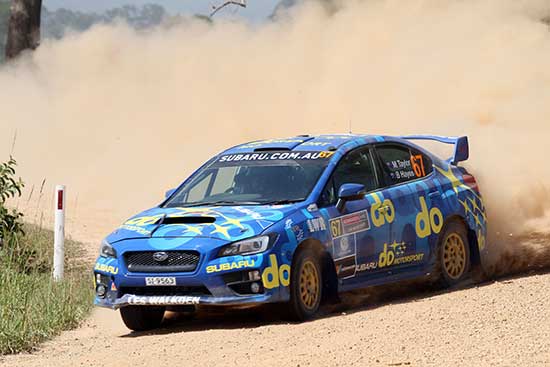 The works Subaru WRX STI will be faster and lighter in 2017. (Photo: Peter Whitten)Subaru Australia Managing Director, Colin Christie, said: “After the excitement and achievement of 2016, we’re keen to take up where we left off.

“Molly is a great Ambassador for Subaru and we’re humbled by the amount of attention she’s gained, especially with the young audience, where she’s an inspirational role model and has attracted attention way beyond the core rally audience.

“By going to the PRC class we can give Molly and Bill a little more leeway in the new car’s performance, while retaining the essential Subaru WRX STI ingredients of turbocharged Boxer engine and All-Wheel Drive.

“From what we hear, the competition may well be more intense this year, so we want to give the team every opportunity to repeat their success – which means it’ll be an even more exciting championship for rally fans!”

Taylor added: “The excitement of our championship win still hasn’t subsided, but I’ve certainly learned and grown as a driver a huge amount over the past year.

“Having a year under my belt as a factory team driver has taught me a lot more about focusing, which has really helped me improve.

“It’s a very motivating environment working with LWR and Subaru. Together, we’re very much invested in winning.

“One of my key learnings from last year is the importance of the ‘one percenters’, keeping that attention to detail and improving every area, no matter how small, so that we’re always in the best possible position.”

Last November, Taylor became the first female – and youngest - winner of the ARC after the tightest title tussle in 25 years.

Hayes took out the co-drivers’ title too, making it a dual celebration.

The championship win made it 11 ARC titles for Subaru. The brand previously achieved an unbroken run from 1996 to 2005 – a benchmark that remains unbeaten - before it withdrew from domestic rallying, only re-emerging in 2016 year under the Subaru do Motorsport banner, to again take top honours.

Rally Queensland given the all clear