Lukyanuk had led all the way from the Qualifying stage, and was maintaining a lead of over 20 seconds.

Leading the Junior driver category right through to the finish was Miko-Ove Niinemae, a young Estonian driver who has been away from international competition for three years.  He led fellow Peugeot driver, Nikolai Gryazin, until the Russian crashed and finally came home in front of two Opel Adams.

Drivers in trouble included Jaromir Tarabus, who impacted a rock on the Qualifying stage, but continued the next day before retiring with consequential engine damage. 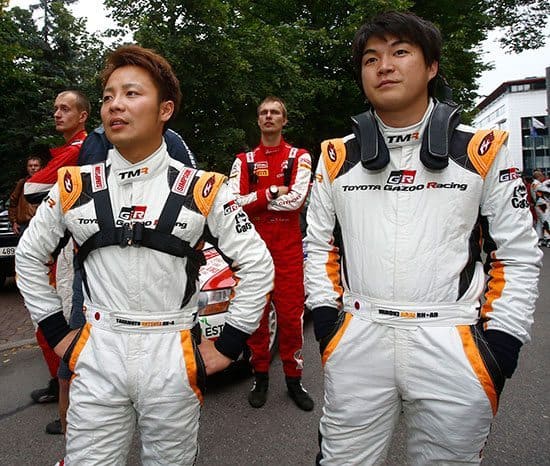 Toyota's trainee drivers Katsuta (left) and Arai both suffered accidents.Kajetanowicz was slowed by power steering trouble on the Saturday afternoon, losing touch with Lukyanuk and Sirmacis.

Notable entries on the event were the two Toyota WRC trainee drivers Takamoto Katsuta and Hiroki Arai, each sons of very successful rallying fathers and both driving Fiesta R5s.  Katsuta crashed twice and Arai once, both having to retire.

Egon Kaur was lying third overall in a Mitsubishi Evo IX before suffering fuel problems, and after that the ERC 2 category for Group N based cars was led by the Evo IX of Rainer Aus, while Siim Plangi had clutch trouble with his Evo X.

Remarkably, all but one of the 12 starters in the Junior category reached the finish, the only retirement being Gryazin.  The Junior competition was troubled by the championship’s running order rules, in which certain drivers ran at the head of the field on the final day, while their rivals ran after the top drivers on much cleaner roads.

A particular victim of this was Chris Ingram who lost considerable time to his rival Marian Greibel.  Ingram said: “It was so bad that I had to downgrade all our pacenotes while we were running first car on the road!”

An impressive performance came from Gustav Kruuda, who finished fourth Junior in a Fiesta R2T.

Happily there were no reports of serious accidents.  The roads of Estonia were as fast as ever, the fastest on the rally being the final stage of the rally when the average speed was 134.7km/h.

Read the latest issue of RallySport Magazine with 80 pages of news, feature stories, interviews and event report. Available to read for FREE by clicking HERE.