Ian Menzies and Bob McGowan secured victory in the Inspirations Paint Capalaba Hinterland Rally after steering in a Mitsubishi Evo IX to a comprehensive lead over a large field of competitors. The first round of the Innate Motorsports + Events Queensland Rally Championship (QRC) was based in Imbil South-East Qld and attracted over 52 entries, coming from as far north as Townsville.  Cars traversed nearly 100km of dirt forestry roads, some of which were used in previous ARC events in Queensland, and it provided a serious challenge for all. Second place and first 2WD was Stewart Reid and Anthony McLoughlin in a superb Ford Escort.  They headlined a dominant show of classic machinery as many of the 4WD turbos fell by the wayside throughout the day. The roaring Toyota Celica RA40 of Clay Badenoch and Catriona Kelly were next in third outright and second 2WD. With several entries for Junior Co-driver, sadly there were no finishers.  However, Michael Gill, as the lone Junior Driver entry, impressed and managed to do what many of the top teams could not and finished, crowned as first Junior Driver. For Round 1 of the Innate Motorsport + Event Clubman Series, the Mazda Familia GTX team of Connor Oldham and Colin O’Brien had a clear victory over their clubman compatriots, as well as finishing an impressive seventh outright for the event. 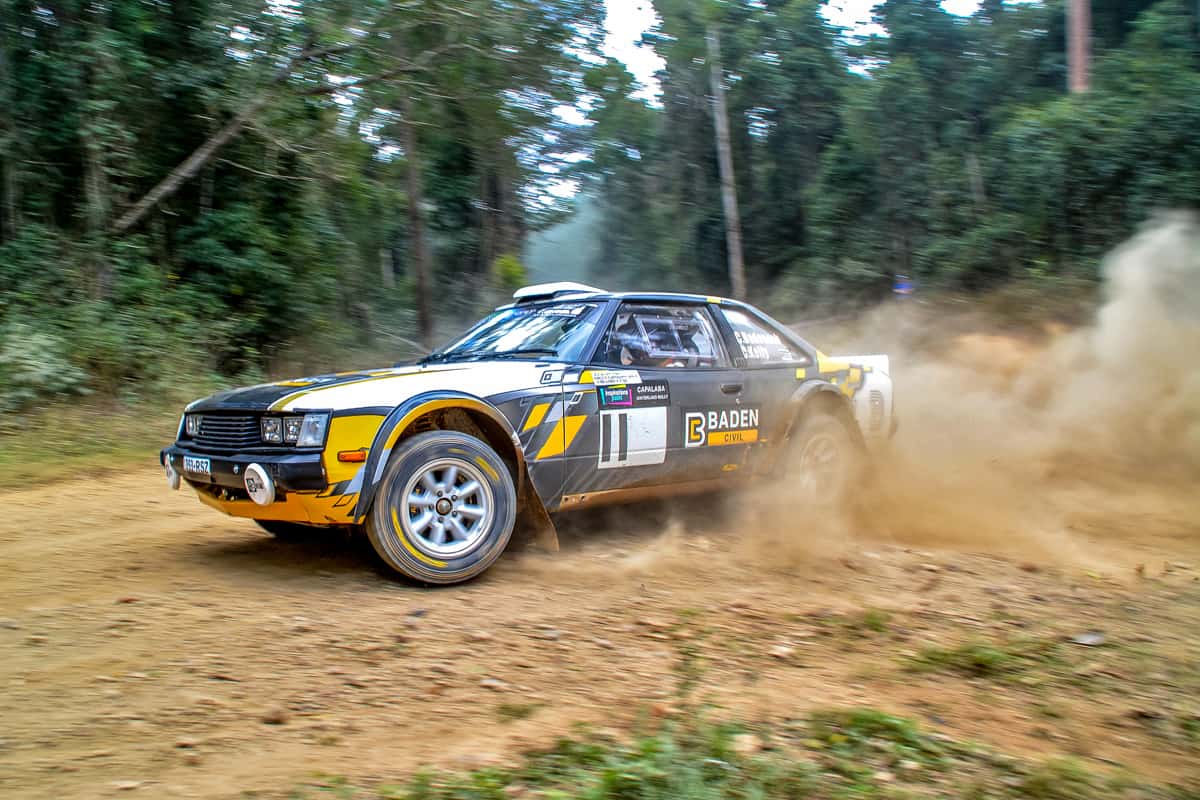 Second for Clubman was the happiest Ford Escort team in the field, Glenn Mitchell and Peter Clydesdale. The husband and wife team of Matt and Amy Davidson had a satisfying finish in third Clubman for their freshly built Subaru Impreza WRX. For Round 3 of the Innate Motorsport + Event Novice Series the pace was hot.  Winning novice driver was Richard Harris, with experienced co-driver Hugh Reardon-Smith in a Mitsubishi Starion.  They set the pace early, leading from the start and they never slowed down. Gary Dutton and Giles Harris were really gelling as a team in their Toyota Celia TA22. Both Novices are getting faster each event and finished second. It was a very tight contest for third Novice between Mathew Dolan/Alex Cherry, Holden Gemini and Emily Jackman/Mark Malpas, Hyundai Excel. Both teams were trading seconds after each stage and equal on others.  In the end, Dolan/Cherry pulled out a clear lead into the final night stage to secure third Novice. For the event, the day started with Stage 1 Woodland (8.1km).  Stage winners on 6m26s was a focused Erik Johnsson and Larisa Biggar, Subaru WRX (Viking Excavations), with only 1s looming behind them Tristan Carrigan and Neill Woolley Mitsubishi EVO 6 (Carrigan Silage). 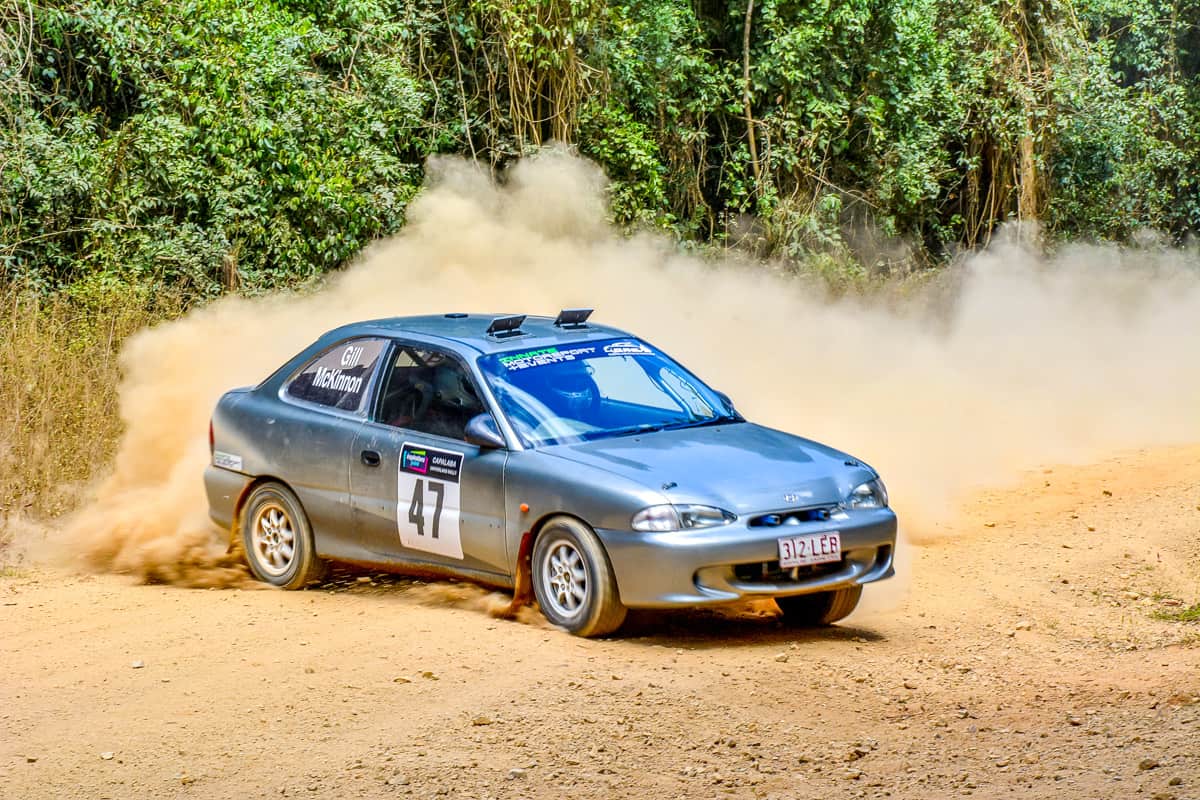 The Gill/McKinnon Hyundai Excel battles the dry and dusty conditions in round one. Photo: Scott Coleman

However, suffering differential issues, Carrigan/Woolley couldn’t continue through to the next stage.  Only 3s behind the leaders was car 1, Glen Brinkman and Steven Richardson with their Mitsubishi Evo 9, then another 7s to Menzies/McGowan.  A time of 5:39 was posted by Badenoch/Kelly, closely followed by Reid/McLoughlin 6th on 5:40. Unfortunately, succumbing to engine problems was event sponsor Marius Swart and Alan Stean, VW Polo S2000, who failed to finish stage 1. An old Imbil favourite Kandanga (12.7km) was Stage 2 and it was still a fight between the 4WDs, Menzies/McGowan smashing out a time of 8:11, Brinkman/Richardson second fastest, while dealing with brake issues on 8:22, and Johnsson/Biggar on an 8:24 suffering fuel surge, handing Menzies a lead of 3s and only 1s in front of Brinkman/Richardson. Badenoch/Kelly in their Toyota posted a fourth fastest 8:33, bumping them up to fourth outright.  Reid/McLoughlin with a time of 8:36, were now only 4s behind the Toyota team. After a quick remote refuel for the teams then it was onto Stage 3 Borumba Short (9.3km).  Menzies/McGowan were again stage winners on 6:18, retaining first outright.  Brinkman/Richardson were second fastest on 6:22, beating Johnsson/Biggar by 3s after the WRX team hit a rock and damaged their exhaust. 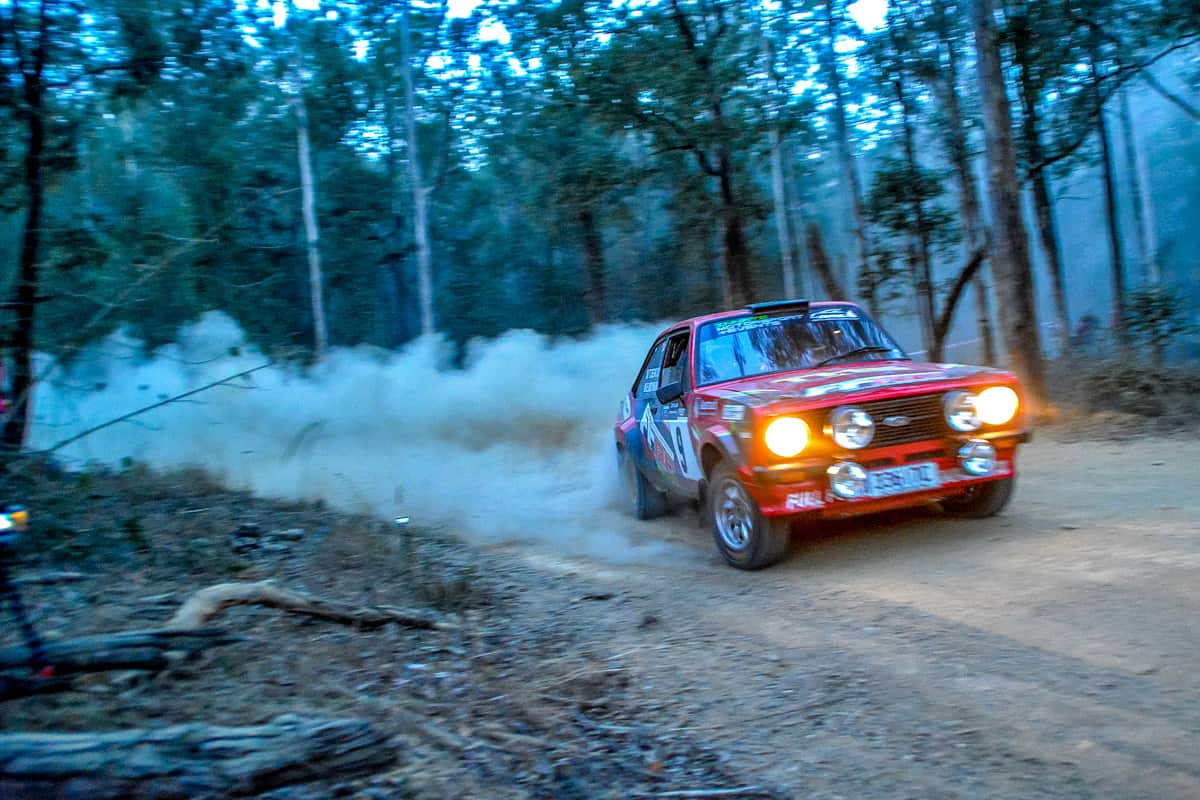 Brinkman/Richardson now sitting in second outright by 2s.  Reid/McLoughlin posting an epic 6:29 which moved them up to equal fourth with Bandenoch/Kelly, who were 4s slower.  Sixth outright at the end of this stage was young duo of Ryan Williams and Brad Jones in a Mitsubishi Mirage  performing incredibly well. Stage 4, Casey’s Long (12.8km), suited the Evo machinery with Menzies/McGowan on song, recording fastest time again of 7:48.  Brinkman/Richardson were second fastest posted a 7:50, now within 10s of Menzies/McGowan and extending his gap over the WRX of Johnsson/Biggar to 14s. Third fastest in Stage 4 was Richard Galley and John Andreatidis, Mitsubishi Evo 8, with a 8:00 neat.  Breaking the tie and move into a clear fourth outright the 2WD of Reid/McLoughlin pulled a stage time 14s faster than Badenoch/Kelly. Williams/Jones retained their position of sixth outright at the end of this stage, with a multitude of cars mere seconds behind. Finally, crews had a chance to service before repeating the loop of 4 stages in the afternoon.  For Stage 5 Woodland 2, Brinkman/Richardson recorded fastest time at 5:22 behind Johnsson/Biggar with a 5:25. 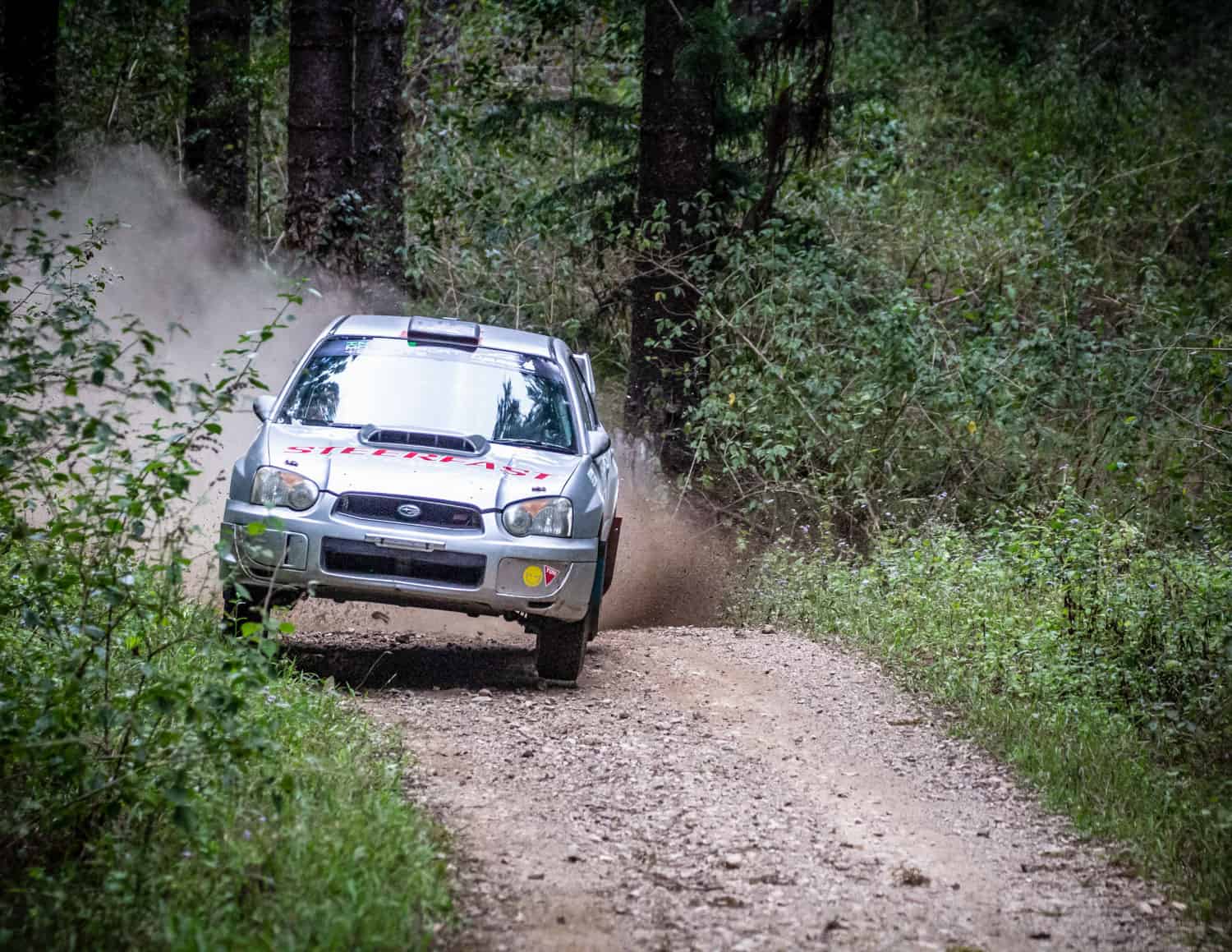 Brinkman/Richardson now only 3s away from the leaders Menzies/McGowan who completed in 5:29. Reid/McLoughlin maintained fourth outright, stretching the gap over Badenoch/Kelly to 14s behind in fifth. Sadly, Williams/Jones in the Mirage had a crank angle sensor failure and couldn’t continue. The crews continued their battle into Stage 6, the second pass of Kandanga.  Brinkman’s hunt came to an end, the team stopping due to a broken gearbox, taking the pressure off Menzies/McGowan. Many times recorded for this stage are derived due to a fire developing near the end of stage after half the field was through. Initially, organisers deleted the stage altogether, but on review reinstated it for inclusion. Now the top 5 were Menzies/McGowan, Johnsson/Biggar, Reid/McLoughlin, Badenoch/Kelly and boosting into fifth Gerard McConkey and Ben Logan, Subaru WRX. At this point, Menzies/McGowan had a solid buffer of nearly a minute and took a steady approach to maintain their lead in Stage 7, Borumba Short 2. Johnsson/Biggar logged a fourth fastest stage time, but suffered a major oil leak and subsequent fire on the finish line, forcing them out. Reid/McLoughlin won the stage on 6:22, 1s faster than Evo of Menzies/McGowan, and with the retirements, they were now in second outright.  Fourth outright was McConkey/Logan and fifth now the Clubman team of Oldham/O’Brien. 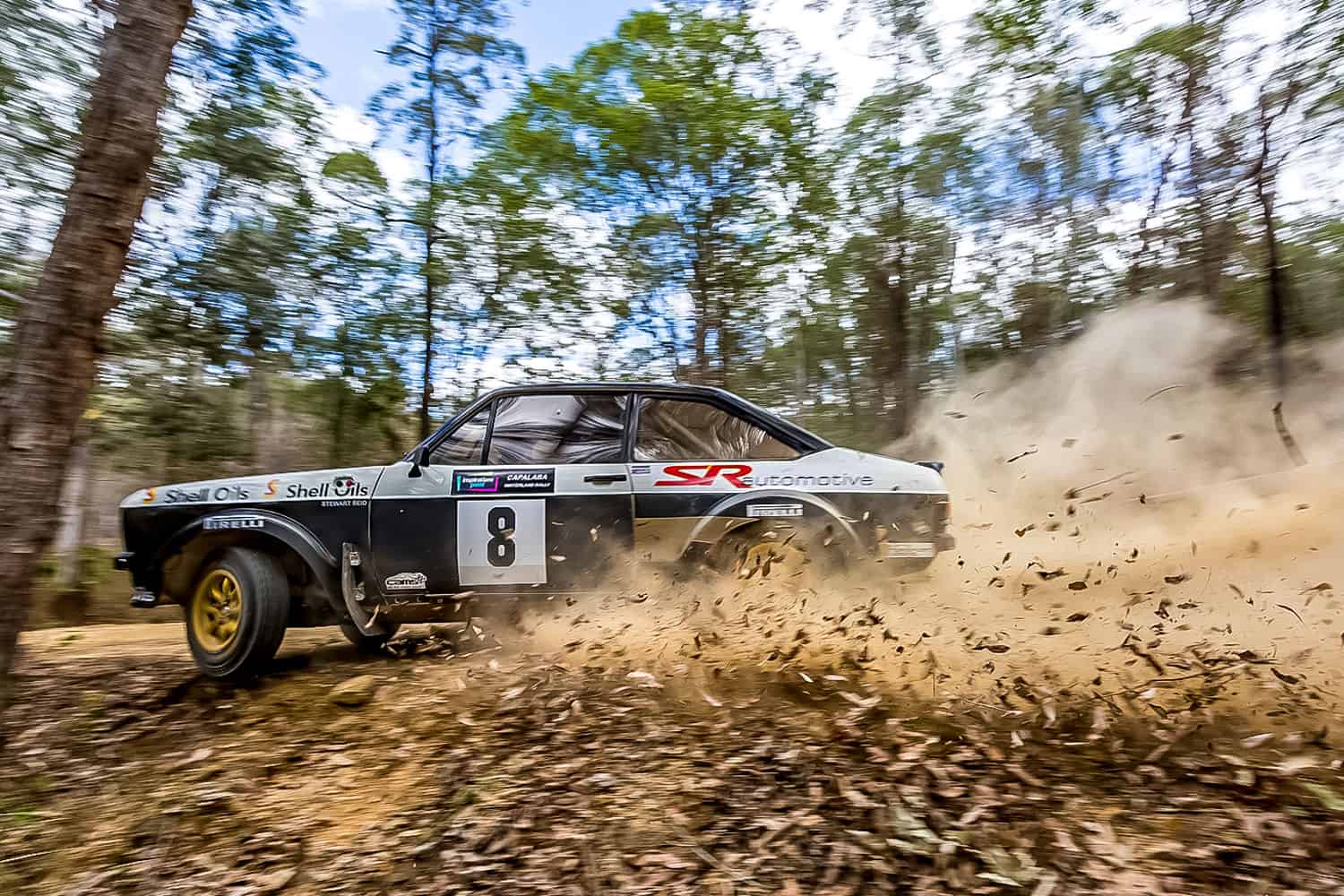 The second and final run of Stage 8 Casey’s Long 2, Menzies/McGowan won the stage on 7:47, but Reid/McLoughlin charged on 7:51, extending his gap ahead of Badenoch/Kelly.  Badenoch/Kelly also dropped time to McConkey/Logan in this stage, meaning the WRX team were only 2s behind the Toyota. Galley/Andreatidis in an Evo 8 set a time of 7:58, jumping him into fifth outright ahead of Oldham/O’Brien by 10s. Crews then had some respite in the service park, while organisers announced a reduction of the rally, dropping the final stage.  Only Stage 9, Kandanga, remained, this time on dusk and into the night. Menzies/McGowan used their road position of first car to full advantage and blitzed the field with a dust free run, securing victory.  Reid/McLoughlin were second fastest in stage and second outright, pulling another 8s clear of Badenoch/Kelly. McConkey/Logan were pushing hard to catch Badenoch/Kelly, but left the road not far from the finish and couldn’t complete the stage, handing Badenoch third outright. Galley/Andreatidis and Oldham/O’Brien who were sitting fifth and sixth before the final stage, but were swamped by Dermody/Hamilton in the night, who made up the 21s deficit by recording a stage time 26s faster and finishing fifth outright and 3rd 2WD.

Menzies indicated that it wasn’t a completely trouble-free victory, “We had a problem with our sump guard.  It got partially ripped off when hitting a grid near the end of SS4, so we used the spare tyre strap to get us back to service,” he said. “The service crew did a great job, especially getting that sump guard back on, it was perfect afterwards. “It was satisfying for us to match times with Brinkman.  Once we passed him on the side of the road we got to a point where we were more focused on just finishing.” The Inspirations Paint Capalaba was organized by the Brisbane Sporting Car Club and included over 170 volunteers to run the event. The next and final round of the Innate Motorsport + Events Queensland Rally Championship will be the Roo Systems Manumbar Rally on October 31, also part of the RSEA Safety Motorsport Australia Rally Cup Hoosier Challenge.  Both registration for officials and entries are now open.
VIP Exclusive Content
Get full, exclusive access for only $6.55/month.
Subscribe Now
Already have an account? Sign in