Ian Menzies and Bob McGowan have won the KCF Rallysport Short Course Challenge - Burnett Sprint #2, as rallying returned to south east Queensland. The pair had a trouble-free return to rallying in their Mitsubishi Evo IX, with a close tussle amongst the elite, snatching victory in the very last stage. The pace-noted event in the Benarkin State Forest  was contested over 46km of competitive stages and took on a slightly different format to a regular rally. Heat 1 consisted of three passes over two stages, with the best two passes of each stage included in the total.  Heat 2 was an amalgamation of the earlier stages to create a single longer stage.  Due to time constraints only one pass of this stage occurred. This format provided a great chance for teams to ease themselves back into rallying after the COVID-19 pause on motorsport. At the end of Heat 1 it was Glenn Brinkman and Steven Richardson (Mitsubishi Evo IX) who had a narrow 13 second lead over Menzies/McGowan and only 4 seconds further behind was Tristan Carrigan and Neill Woolley (Mitsubishi Evo VI) in third place. 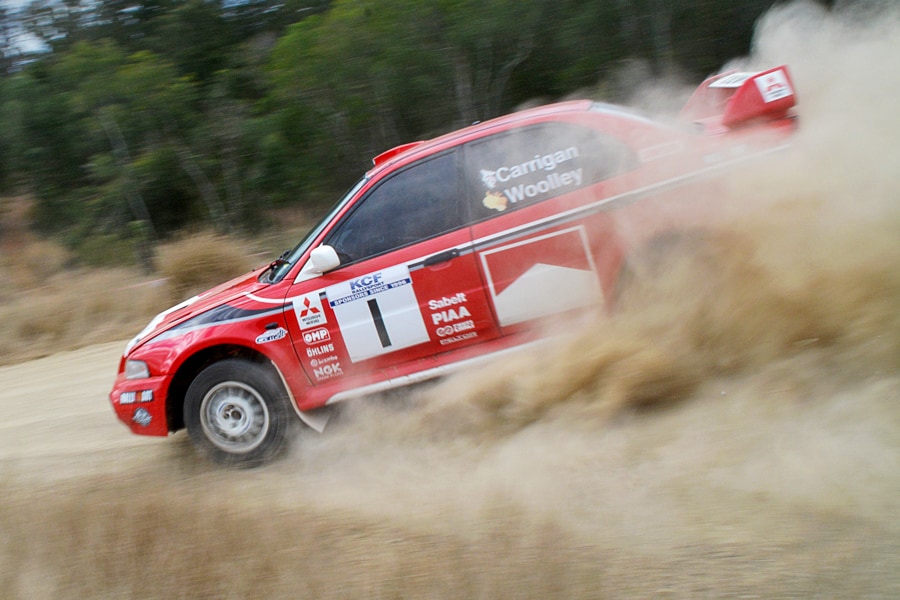 Experiencing a few teething problems in their new car, Carrigan/Woolley opted only for the minimum number of passes for each stage. Showing good speed in fourth place and 22 seconds behind third was former rallycross driver and co-driver, Ronnie Bustard, in a Mitsubishi Evo IX, with Cahal Carey now in the co-driver’s seat.  Only 1 second behind in fifth was an in-form Gerard McConkey and Ben Logan (Subaru WRX GC8).  Needless to say, the battle was on for all in Heat 2. Over the 13km stage for Heat 2 both Carrigan/Woolley and Menzies/McGowan set the same time of 6:51. Unfortunately Brinkman/Richardson experienced a turbo hose failure and settled for a time of 7:30, 39 seconds slower. This meant victory for the faultless Menzies/McGowan, with Carrigan/Woolley shifting up to second place and relegating Brinkman/Richardson to third.  Bustard/Carey charged ahead for a time of 7:02 securing fourth place and extending the gap to McConkey/Logan, a further 6 seconds in fifth. “I was surprised with how quickly we got up to speed,” Menzies commented. “Coming into the final stage our goal was to hold Tristan at bay and keep him behind us. Brinkman was too fast to catch at that point.” 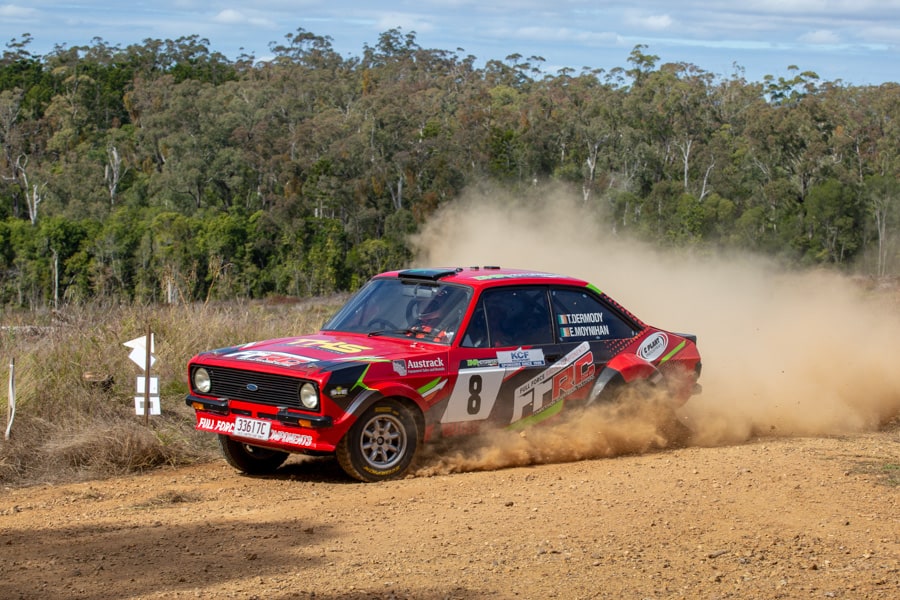 Tom Dermody had a new co-driver in his Escort, due to border closures. CH Images

For the event classes, in rear-wheel drive class it was a clash of the Escorts.  Fastest was Thomas Dermody and John Leahy (Ford Escort RS1800) keeping a gap of 13 seconds behind the screaming Mark 2 Ford Escort of Brian O’Neill and David Waters. Both Escort drivers had to adjust new note callers in the car as border restrictions prevented their regular co-drivers from attending.  In third place was Chris Wedding and Wayne Jefferies in a Datsun 1600. The front-wheel drive class was between two finishers.  Tim Collingwood and Greg McAndrew in a screaming Honda Civic Type-R took a clear victory from novice entry of Emily Jackson and Niall Cassidy in a Hyundai Excel. 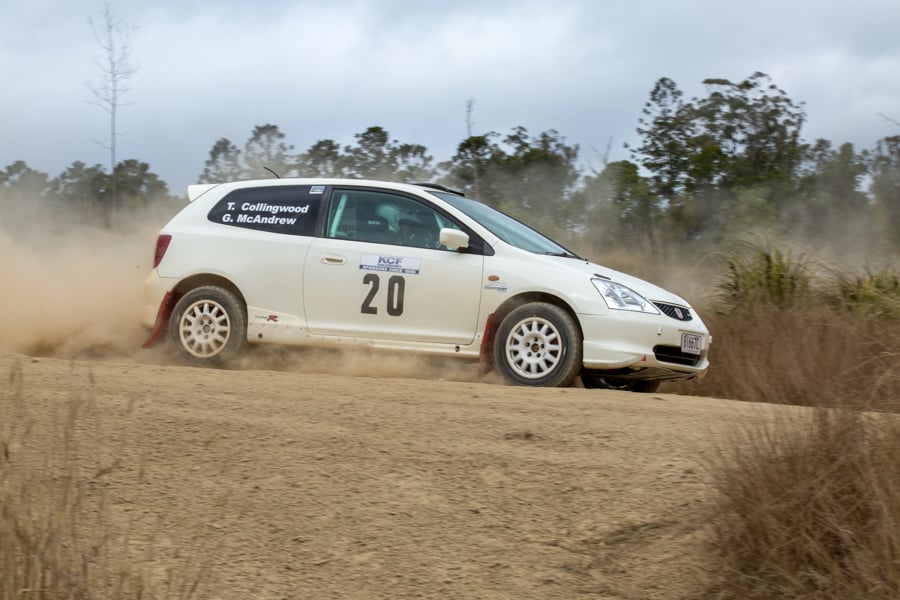 For the 4WD class it was the outright winners taking the places. The event was also Round 2 of the hotly contested 2020 Queensland Novice Rally Series.   At the end of Heat 1 there was an unassailable lead of 1m42s by Mitsubishi Starion driver Richard Harris, with experienced co-driver Hugh Reardon-Smith. However, the contest behind them was fierce.  Wessel Pieters and Jan Kraaij in a Subaru WRX held second position on total time of 15:27. Trailing by 26 seconds and sharing third place were Kirsty Wedding and Mark Malpas (Chrysler Lancer) and Gary Dutton and Giles Harris (Toyota Celica TA22). Ready to pounce, only 9 seconds behind, was Matthew Dolan and Alex Cherry (Holden Gemini) and a further 6 seconds back were Emily Jackson and Niall Cassidy (Hyundai Excel). Unfortunately, series leaders Krystle Power and Brad Hurford slid wide into the scenery, failing to finish. In Heat 2 it was a repeat scenario of Heat 1 for Harris/Reardon-Smith, and they cruised to a compelling novice win.  In a cruel ending, Pieters/Kraaji could not hold their second position, rolling their WRX out of contention. 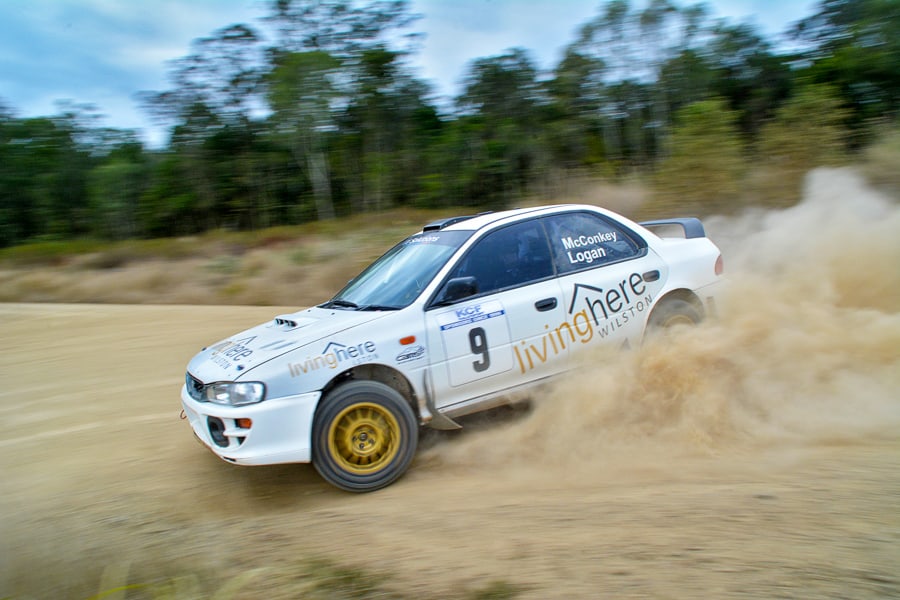 That upgraded the battle of the tied teams of Wedding/Malpas and Dutton/Harris to a fight for second. The times were close with Dutton/Harris laying down an 8:52, Wedding/Malpas a respectable 9:14, but the remaining novice teams of Dolan/Cherry and Jackson/Cassidy both set a 9:07. Dutton/Harris’ time was enough to secure second place novice for the event, and the stage time for Dolan/Cherry elevated them into third. The 2020 Queensland Novice Rally Series has new leaders at the top of the points table.  Dutton/Harris have finished second in both rounds, ensuring enough points to be the front runners.  Equal second on the table for the drivers are Power and R. Harris.  Second for the novice co-drivers is Hurford, with Cherry in third position. See full results below. 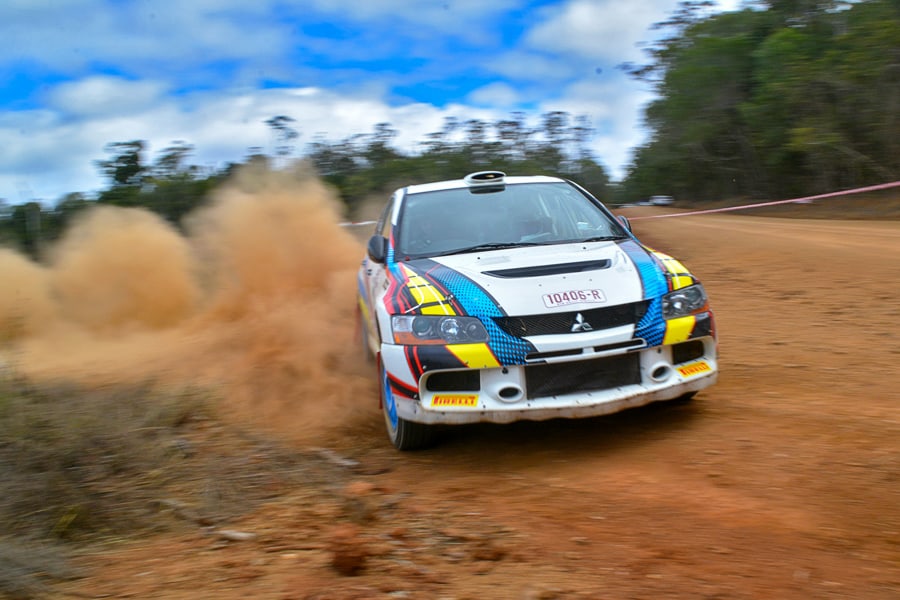 The event would not have been possible without the use and hospitality of the Benarkin State School community or without the help of the large number of volunteers assisting organisers Brisbane Sporting Car Club. The next round of the 2020 Queensland Novice Rally Series will be the Hinterland Rally – Imbil on September 19.  This rally will also be the first round of the shortened 2020 Queensland Rally Championship. 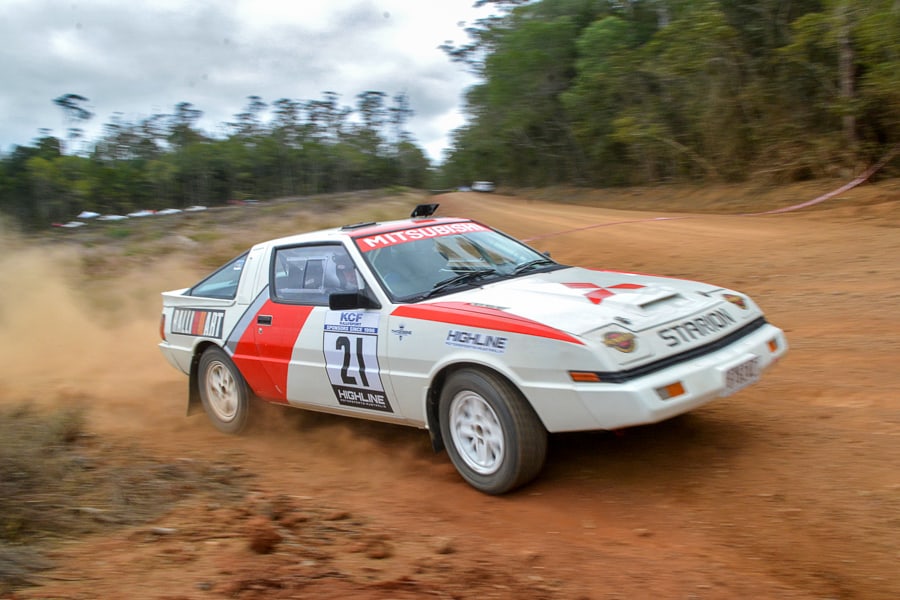 The Harris/Reardon-Smith Mitsubishi Starion on its way to winning the Novice class. Photo: Scott Coleman