Last week’s announcement that former Honda driver Mark Pedder will turn his attentions away from the East Coast Bullbars Australian Rally Championship and onto the Asia-Pacific Rally Championship comes as a blow for the series, with Mark himself describing the decision as both ‘disappointing and exciting’.

“At the end of last year I said very publicly that Eli and I would try everything to keep driving together, so it was extremely disappointing to have to make the decision to put those plans to one side,” said Mark.

“Having said that we tried an awful lot of angles and options but in the end I’d held off on making any other decisions and that time was about to run out.” 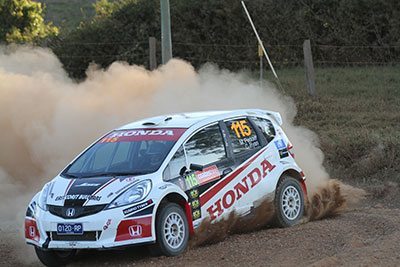 Pedder joined the Honda and Evans Motorsport outfit at the start of the 2012 season when they expanded from the single Civic to a pair of Jazz’s built to the newly launched G2 regulations.

“It’s such a shame because I’ve had a great time over the past two years with Eli and the Evans Motorsport team. They have been supportive of me, given me a great car to drive and I can’t thank them enough.”

“If we had have been able to convince Honda to let us run the Jazz again I would have been there straight away, unfortunately they didn’t want to run the cars and at the end of the day they own the cars and it’s their decision to make.”

“I thought we put some really good proposals to them, but I think they just decided they wanted to go in a different direction,” stated Mark.

With time running short Pedder pulled the trigger on an option to contest the opening three Rounds of the Pacific Cup, a stand alone trophy within the Asia-Pacific Rally Championship that was coincidently won by Australian husband and wife Simon & Margot Knowles.

“Contesting the Pacific Cup though is very exciting, to compete in New Zealand, New Caledonia and of course Rally Queensland is an opportunity I didn’t want to let get away from me,” said Pedder who will drive a Group N Mitsubishi Lancer Evo X.

“I’ve gone over to New Zealand many times to spectate at the WRC Round, so to be able to drive those amazing roads is definitely a tick off my bucket list!” he explained. “Scott competed in New Caledonia in 2008 with the Race Torque team and he always described it as a very tricky rally with lots of challenging roads and surfaces changes, so I’m looking forward to that challenge of competing in a new country.”

The move will see Pedder reunite with Race Torque, the West Australian team who ran his older Lancer Evo IX in the ARC in 2010 and 2011.

“When I decided the Pacific Cup was what I wanted to do I knew there was only one team I wanted to do it with and that was Race Torque. They are good friends, they run a sensational car and team and I can’t wait to be working with them again.”

Pedder though is quick to point out that in no way is he turning his back on the Australian Rally Championship and that he is already planning a comeback.

“I have a couple of irons in the fire for next season in the ARC, and the ultimate plan would be to spend the second half of this year preparing for a proper return in 2015,” he hinted.