Hyundai Motorsport has begun its sixth season in the FIA World Rally Championship (WRC) with a maiden stage win of 2019, as Belgian crew Thierry Neuville and Nicolas Gilsoul completed the opening day of Rallye Monte-Carlo in third overall. On a classic Monte evening with two demanding night stages, tyre selection was pivotal to performance on contrasting roads. Crews first tackled the icy 20.76km test from La Breole to Selonnet before then facing a dry 20.59km run Avançon – Notre Dame du Laus. Nine-time WRC champions Sébastien Loeb and Daniel Elena made their Hyundai Motorsport debut with all studded tyres that enabled them to take fourth in the opening stage but then saw them struggle in the second. The crew ended Thursday’s short but tough itinerary in eighth overall. Norwegian pair Andreas Mikkelsen and Anders Jæger-Amland were just four seconds further back in ninth after an equally challenging start to the notoriously punishing Monte-Carlo event. Crew Notes: Thierry Neuville/Nicolas Gilsoul (#11 Hyundai i20 Coupe WRC)
Neuville said: “We have started our season with the right mentality, trying to find our own direction and going with our feelings. The tyre choice this evening was a compromise. With the information we had, we felt we made a good choice, and at the end it was OK. I was perhaps expecting to gain more time on the second stage in the dry conditions but we didn’t, which was a shame. But it’s not too bad considering it’s so early in the rally. We will see what the weather does tomorrow and aim to stay in the fight for the win.” 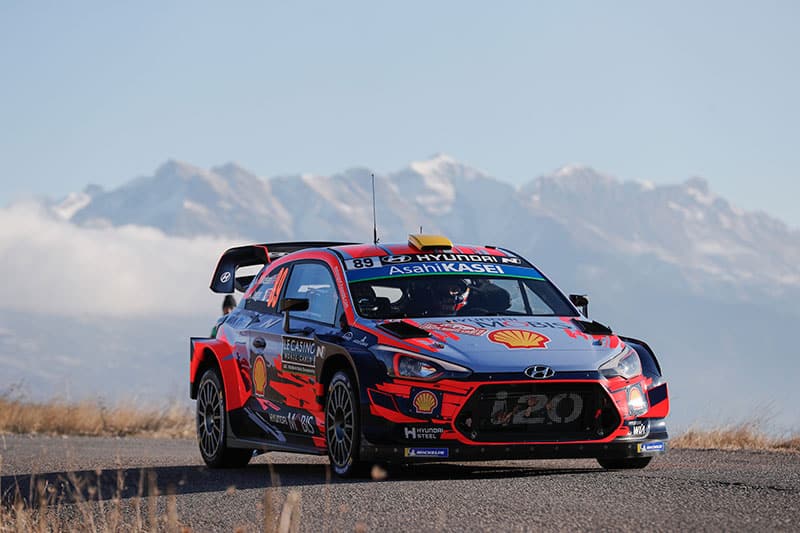 Crew Notes: Andreas Mikkelsen/Anders Jæger-Amland (#89 Hyundai i20 Coupe WRC)
Mikkelsen said: “A typically tricky start to Rallye Monte-Carlo! In the opening stage, about 1km from the finish, I thought the stage had ended and I started to back off. It was a silly mistake that cost us time. Other than that we just took things cautiously. The second stage was completely dry and we were on four winter tyres: we were sliding everywhere. We could have opted for crossed tyres but I don’t have much experience with this car in such conditions. We did the best we could.” Crew Notes: Sébastien Loeb/Daniel Elena (#19 Hyundai i20 Coupe WRC)
Loeb said: “It has been good to make our debut as a Hyundai Motorsport crew, even if it was a tricky start. The opening has not been too bad, even if it is not easy to start in the night and in icy conditions. The first stage went OK but we didn’t select the best tyres for the second one and we suffered as a result of that. We perhaps underestimated the performance gap between the slick tyres and four snow tyres. We made it to the end and that’s the most important thing. Tomorrow, our aim is to get into a good rhythm on the slicks and take it from there.”Team Director Andrea Adamo: “It’s great to get the 2019 WRC season up and running. We’ve had a busy off-season but now the gloves are off once again. Two stages in tricky conditions and in darkness is a baptism of fire for any team and crew, however experienced they are. We have already seen different tyre choices across the crews in an effort to react the best to the circumstances, but it’s not an easy rally from a strategic point of view. We have had a steady start but there is a long way to go in this rally yet.”  Friday at a glance
Classification after Day One
VIP Exclusive Content
Get full, exclusive access for only $6.55/month.
Subscribe Now
Already have an account? Sign in