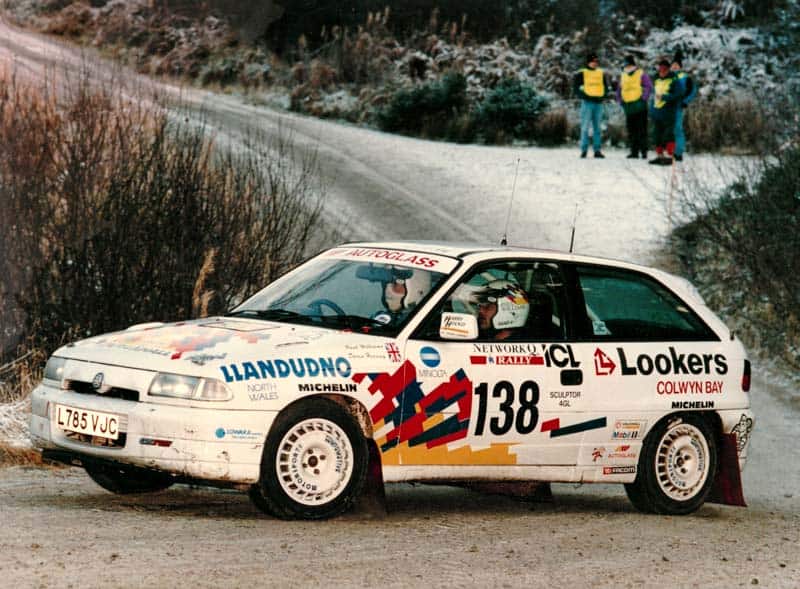 Daren Herring made a name for himself, winning the Welsh Formula 2 rally championship in a Vauxhall Astra.

It was part of a busy stretch for Herring, who has also set up a new business, MSS Safety, and become the naming rights sponsor of this year’s Gorge Rallysprint in his adopted home state.

Daren takes up the story of his rallying career, and it makes for a great read. 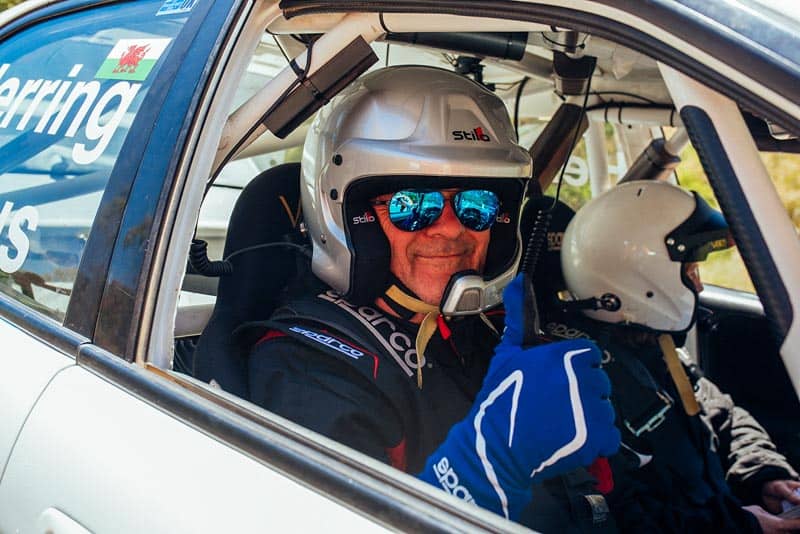 Daren Herring is keen to have an impact on Australian rallying – on and off the stages.

“I officially returned to rallying on the Adelaide Rally in December 2019 after a long break! We came seventh overall in the competition class, first time in my Lancer Evo 6 (never drove faster than 60km/h before the first stage), gravel spec brakes and on 1-10 notes for the first time with a new co-driver on only her fourth event! (Anja Straus).

“The Evo 6 is basically a gravel car and kind of Group N+,” he says.

“My last event before that was driving for Geoff Jones Motorsport in one of his Nissan Micras on the British Rally Championship’s Jim Clark Rally back in 2000.”

“I’m originally from North Wales, was born in Crewe, Cheshire, but grew up in Wales. My home town is Llandudno, which has hosted stages of Rally GB over recent years.

“I didn’t start rallying until I was 25,” Herring explains. “From the age of 14 I raced moto-x, and, if I say so myself, got pretty handy at it.

“I raced 125cc, 250cc and open class, usually on the same days where possible.I had raced on the Isle of Man many times, particularly during September, usually the week before the Manx International Rally.

“In the course of my work, I also visited the Isle of Man to see clients. On one visit, my employer was in the market for new vehicles, and having a spare few moments I called in at a Ford dealership, in Douglas, Isle of Man to get some pricing.

“The sales person who helped me, I found out later, was Gary Leece, Isle of Man rally champion. 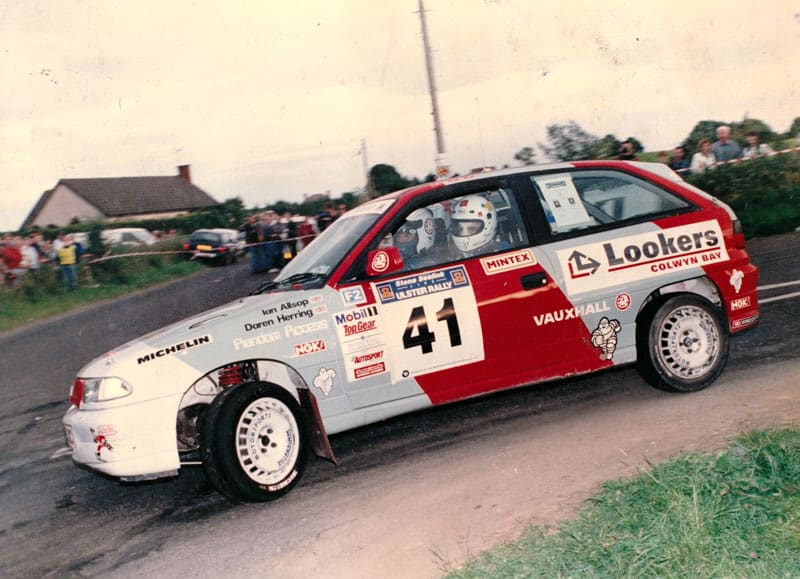 Herring driving his Vauxhall Astra on the Ulster Rally in the UK.

“I was still recovering from a big pre-season moto-x crash, which had seen me pretty much asleep due to injuries and powerful meds for the better part of three weeks.

“I had returned to the bikes, but it was hit and miss if I would make it through practice without my shoulder popping out. If it did, I’d require a 6-8 week recovery on each occasion, so it had left my racing career massively in doubt.

“During the meeting with Gary, I commented on the Group A Sierra Cosworth sitting in the showroom, which turned out to be his. I off-handedly remarked that it was something I’d always been interested in, but never had looked into due to moto commitments.

“He suggested I get involved. He pointed me in the direction of the officials of the Manx International, then the final round of the Mobil 1/Top Gear BRC.

“John Brown hooked me up with a ‘travelling marshal’ role, which saw me driving through stages in my company road car, sometimes live stages, to where spectators needed herding in, to provide marshalling cover or some other minor incident needed attention.

“Sometimes it was to assist cars which had gone off the road.

“This sparked my interest. The company I worked for, which I also was a partner in, was selling up and there was an opportunity to redress a financial imbalance between myself and another partner.

“The the solution? Turn my roadgoing Vauxhall Astra GTE 16v company car into a rally car. 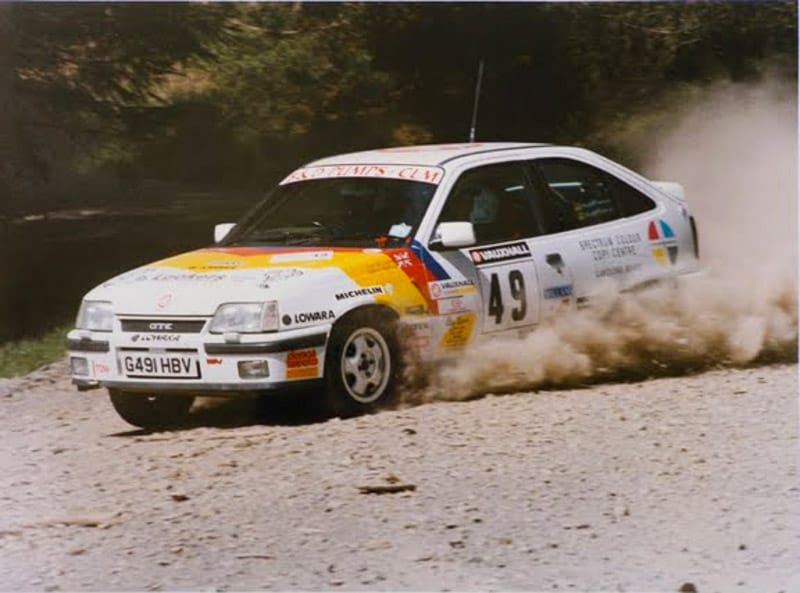 “Looking back, the conversion, whilst professional and well executed, saw this poor little shopping trolley have its seams welded, a cage and a bunch of other bolt ons installed, just at time when a ‘normal’ car would be considering retirement, rather than repurposing. Those 103,000 miles (164,000km) had been pretty hard on the car already.

“I called John Brown at the Manx, proudly announcing I now had a homologated car with a cage! John sorted me out a gig as interim course car, between the international field and the historic field that followed.

“It was a similar role to that previous, but with road books, timing cards, suits and helmets! My co-driver was from the island, a local girl I was seeing at time, who was pretty handy peddling a car herself and who knew the Manx roads inside out.

“So off we went. Turns out my co-driver, whilst mad keen and enthusiastic and actually pretty good, also got very car sick when not driving. To her credit she must’ve had an iron constitution, because she always managed to hold on to it until after the finishing time control, then look out!

“One of my claims to fame was pulling Colin McRae out of several hedges in his Vauxhall Nova!!

“At the end of day one, with the final stages taking place in the dark, I was called to race control, not a call anyone wants to get usually. I was asked how it was going. I said great, it’s fun.

“They said okay, so, we need you to slow down a little. You are supposed to be checking the course as you go and reporting what needs fixing. I thought I had been, I replied. 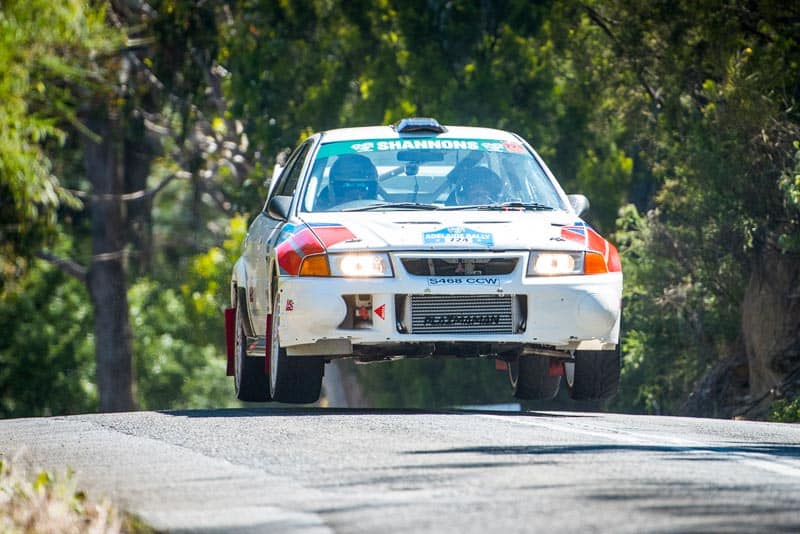 Daren Herring has started competing in tarmac rallies in a Lancer Evo 6.

“You don’t compete do you? they asked. I said no, not yet. You should, they said.

“Without notes or maps, interestingly in the dark, we had had several stage times well inside the top 20, in a basic Group N Astra, standard everything, including tyres. That was September 1992.

“The car was converted to gravel spec in time for the 1992 Cambrian Rally. I had never driven a car on the loose or gravel.

“I got hold of Geoff Jones, of Geoff Jones Motorsport fame (a former Prodrive test driver), who took me out for a couple of hours of tuition at Sweet Lamb two weeks before the Cambrian.

“Geoff’s gentle, but insistent and ever so slightly sarcastic encouragement, got me in the right groove and we took out the Group N class win a few weeks later, my first rally in the Welsh forests.

“We entered the Vauxhall Astra Stages, only to crash out one stage from home, leading the class again, with a TCA failure. 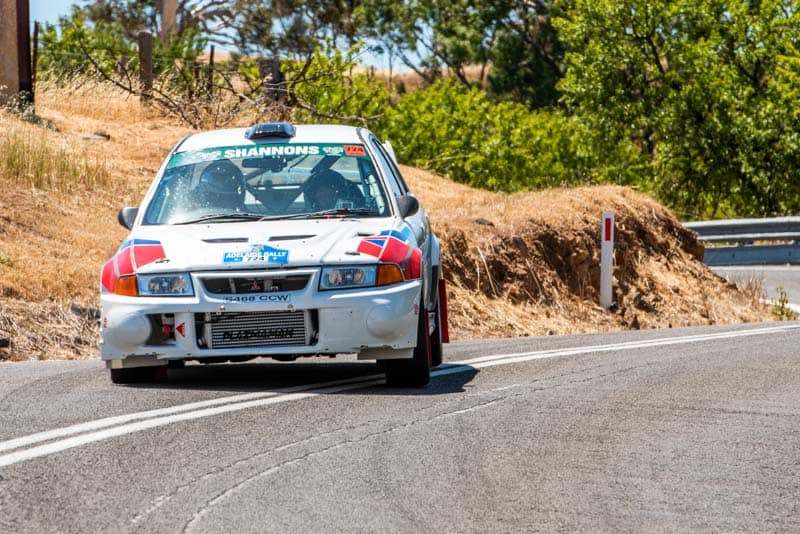 “For 1993 I entered the City Speed of Gloucester Welsh National Rally Championship. We won the F2 category, coming fourth overall, so I can rightly claim to be national champion of my home country!

I did The Bend Rallysprint in late March in my 2018 WRX STi road car… got second in class, even though I was pulling up every time there was a surface change to save my rims!

“As a weird coincidence, I got contacted the week of the Adelaide Rally by someone asking odd questions about the Astra we built for the ’94 BRC.

“It turns out Adam had found the car in a shed with the engine in the boot, and restored it to its 1994 livery, including my name on the wing, and ran it as retro ceremonial on the first round of the 2020 BRC in my home town, Llandudno.” 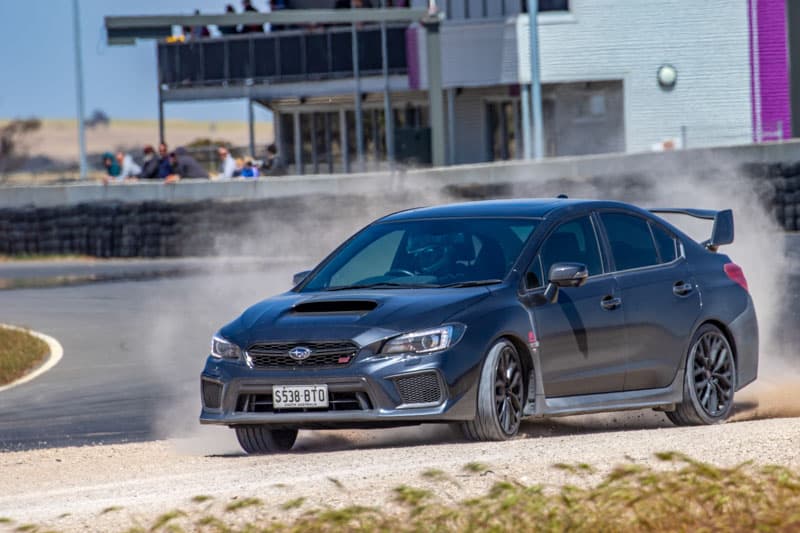 Herring pushing his road-going WRX hard during a track day at The Bend circuit in South Australia.