Five-time winner Sébastien Ogier catapulted himself into serious contention to equal Sébastien Loeb’s record six victories at Rally Guanajuato México with an outright lead of 13.2 seconds on Friday evening. The Toyota Yaris WRC driver won three of the day’s nine timed tests (SS8 was cancelled) and will restart from a favourable position on the road on Saturday. Finland’s Teemu Suninen delivered an impressive performance in the leading Ford Fiesta WRC to hold second at the night halt, 20 seconds ahead of the current World Championship leader Elfyn Evans. The Welshman managed to re-pass a resurgent defending World Champion Ott Tänak on the last short stage of the day. After losing time with damaged suspension in the morning, the Estonian had snatched third from Evans on stage nine but finished the day 0.2 seconds behind. Tänak won three of the day’s six gravel stages. Finland’s Kalle Rovanperä overcame a slow puncture on the morning loop to hold fifth, setting the fastest time on SS12 for good measure, and Gus Greensmith rounded off the surviving World Rally Cars in sixth with the second of the Fords. Seventh-placed Pontus Tidemand is looking for a hat-trick of WRC2 wins in México and the Swedish Škoda driver reached León with a lead of 51.1 seconds over Russian Nicolay Gryazin in the first of the factory Hyundai NG i20s. Brake issues dropped Ole-Christian Veiby to a distant third in the category. FIA WRC3 front-runner Marco Bulacia and closest rival Emilio Fernández rounded off the top 10 in the overall standings in their respective Škoda Fabia and Citroën C3. Ricardo Triviño was the leading Mexican driver after earlier technical problems sidelined last year’s WRC2 winner Benito Guerra. Overnight leader Thierry Neuville lost his grip on third place on the last of the day’s gravel stages when technical issues sidelined the Hyundai i20. 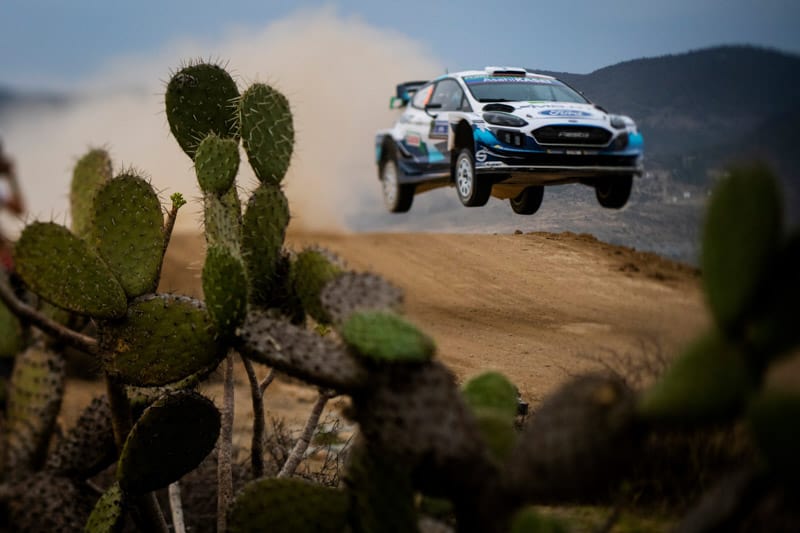 Teemu Suninen lies in second place after the opening day of Rally Mexico.

The second run through El Chocolate spelt the end of the road for both Ford’s Esapekka Lappi and Dani Sordo. Flames engulfed the rear of the Finn’s Fiesta WRC after the flying finish and the crew could only abandon ship and watch from a distance as fire destroyed the car on the subsequent gravel link section. A stunned Lappi said: “On the stop line, when Janne (Ferm) opened the door, he said ‘the car is burning now’. I did not realise how big fire it is and I tried to still drive. I did not shut down (the fire). Luckily we are fine. We had no issues on the stage. I don’t know what caused that. I could not see the fire. All the tinted windows are blocking the view quite well and then I lost the brakes and realised it was still burning like hell. Then I jumped out. We did not know so much fire.” Dani Sordo had lost over five minutes with a water hose issue to the radiator on the first run through the test in the morning and appeared to have recovered well with a fastest time and a useful pace after the afternoon restart. But the crew noticed smoke under the bonnet of the i20 after 26km of the seventh stage. A fire extinguisher solved any serious concerns, but the Spaniard was going no further with terminal engine problems, potentially caused by the earlier overheating issue.

On the stop-line, Janne opened the door and said the car is burning. I didn't realise how big the fire was, so I tried to drive. Luckily we are fine, but I don't know what caused it. Feel sorry for the @MSportLtd and the fans. #wrc #Msporters #L4PPI https://t.co/ELhYskgA34

Friday – as it happened The demanding 31.45km of the El Chocolate stage got the day’s gravel action underway with the sinuous dusty trail climbing to over 2,700 metres. Evans opened the road and set an impressive target time of 22min 00.9sec, although he dropped 7.2 seconds to Neuville and a massive 26.3 seconds to a flying Tänak, who stormed into an outright lead of 10.6 seconds over Suninen. Ogier held third. It was a dismal start for Sordo, the Spaniard being forced to make under-bonnet repairs to a water pipe from the radiator after six kilometres. The delay cost the dejected Spaniard 5min 24sec to the new leader. Pontus Tidemand started well in the FIA WRC 3 battle, but FIA WRC 2 rival Benito Guerra stopped early in the stage for over six minutes and Ole-Christian Veiby was forced to run through the special at a snail’s pace with brake issues. Oliver Solberg started strongly before clouting the sump on a rock and losing the engine oil close to the flying finish and American guest driver Ken Block was forced out when his Ford Escort Cosworth developed terminal overheating issues. The 17.24km of Ortega followed: Evans and Neuville tied to the fraction of a second, but Ogier beat them by 4.2 seconds. The Frenchman stormed into the outright lead with the fastest time, as Suninen and Neuville slotted into second and third when Tänak lost 45.9 seconds after damaging the rear of his i20 and plummeted to eighth. Tidemand and Bulacia led their respective WRC2 and WRC3 sections, with Bulacia extending his advantage after Pedro Heller crashed out of contention and Kajeten Kajetanowicz was continuing to be plagued by electrical issues. 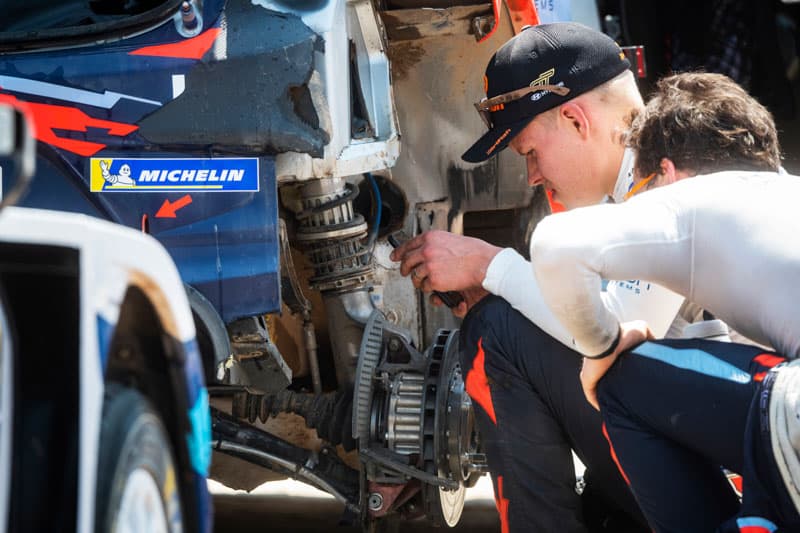 Ott Tanak and Thierry Neuville working on Tanakˇs car after he broke the rear suspension.

A furious Tänak said: “I went wide and hit a rock and broke the rear suspension. I could not repair it, but had one link in the car. We fixed one but the other was broken.” With temporary repairs made to his Hyundai on the road section, Tänak clocked the second fastest time in Las Minas although Ogier extended his overall lead to 7.8 seconds over Suninen and Neuville maintained third. Sordo claimed the stage win and Tidemand’s WRC2 advantage over Gryazin grew to 22.9 seconds. Ogier maintained the lead through the short Parque Bicentenario super special, near Silao, and reached the midday halt and service with a lead of 9.7 seconds over Suninen. A disgruntled Tänak lost more time, Sordo overshot a junction, while Neuville, Lappi and Evans consolidated their places in the top five. Tidemand’s lead in FIA WRC2 grew to 23.4 seconds and Bulacia headed Emilio Fernández by 1min 19.6sec in WRC3. The three gravel stages were repeated in the heat of the afternoon and Ogier turned up the heat to strip another nine seconds out of Neuville and 13.3 out of Evans. Suninen trimmed Ogier’s lead to 8.2 seconds with the second fastest time behind Tänak, but Lappi’s car caught fire at the rear at the end of the stage and the Finn and co-driver Janne Ferm were forced to abandon ship before the Fiesta WRC became totally engulfed in flames and was destroyed. Sordo was forced to stop after 26km of the stage with smoke coming from under the bonnet, as the curse of Friday the 13th struck both Ford and Hyundai. Tideman managed to extend his advantage over Gryazin to 41.8 seconds in FIA WRC2 and Bulacia maintained his FIA WRC3 lead to take to the rerun of Ortega. But rally officials decided to cancel the subsequent gravel stage, as there would have been insufficient time to ensure that fire equipment was in situ in time to guarantee that all the stages were completed in daylight. Crews, therefore, travelled through the special at road speed to the start of Las Minas. Evans carded the target of 8min 58.1sec, but it was a miserable gravel stage finale for Neuville. His i20 ground to a halt five kilometres into the special and the Belgian ceded third place to Tänak following Lappi’s retirement earlier in the afternoon. Only 1.5 seconds separated the Estonian, Evans and Rovanperä in third, fourth and fifth. Tidemand held a 47.5-second lead in WRC2. Two runs through a Shell V-Power-sponsored super special at the local Autodromo preceded a tiny 730-metre sprint around the streets of León to round off the day’s action. Ogier won both stages at the Autodromo and extended his lead to 13.5 seconds, as Rovanperä topped the times on the last one in a time of just 45.7 seconds. Saturday The day’s action includes two loops of the Guanajuatito (24.91km), Alfaro (16.99km) and Derramadero (21.78km) gravel stages and three short super specials to conclude the day’s proceedings. Classification after Day One
VIP Exclusive Content
Get full, exclusive access for only $6.55/month.
Subscribe Now
Already have an account? Sign in