The duel for the overall lead in the FIA World Rally Championship (WRC) is once again Polo R WRC against Polo R WRC at round six of the WRC. Sébastien Ogier/Julien Ingrassia and Jari-Matti Latvala/Miikka Anttila line up at the Rally Italy, from June 5 to 8, each with the goal of improving their position in the World Championship. 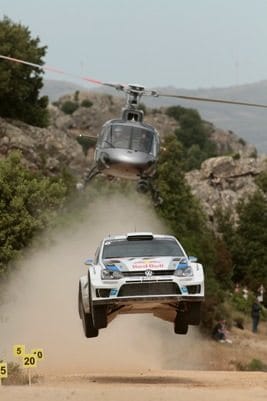 One pair has its sights set on extending its lead, whilst the other is looking to leapfrog their team-mates in the Drivers’/Co-Drivers’ Championship. As such, there is every chance that the all-Volkswagen duel between World Champion and challenger – or first against second in this year’s championship – will be just as thrilling as it was at the latest round in Argentina.

Ogier currently leads Latvala by 24 points. Their closest rival is fellow Volkswagen driver Andreas Mikkelsen, who lines up alongside his former co-driver Ola Fløene in the pinnacle of rallying for the first time. Mikkelsen is a further 40 points behind Latvala.

“Volkswagen currently finds itself in a privileged situation in the World Rally Championship,” said Volkswagen Motorsport Director Jost Capito. “The whole team is working hard and focussed on success, and is consistently providing our three drivers with top material. Sébastien Ogier, Jari-Matti Latvala and Andreas Mikkelsen are paying them back in the form of outstanding performances and first-class results.

"First second and third in the Drivers’ Championship and first place in the Manufacturers’ Championship are emphatic proof of this. Fans in Italy and those watching the WRC from home can once again look forward to fair and top-class motorsport. I have to say: anyone who does not follow the action on Sardinia will miss out.”