Volkswagen opened the new season of the FIA World Rally Championship (WRC) with a dream result. Sébastien Ogier/Julien Ingrassia produced an irresistible fightback and an outstanding driving display to secure victory on the first weekend of the 2014 season.

The success at the “Monte” is their 17th victory in the WRC, and their tenth with Volkswagen. The win was the duo’s second at the rally classic, having previously won in 2009 when the event in the Mediterranean principality did not form part of the world championship. Second place went to Ford driver Bryan Bouffier, who won here in 2011, with Citroën’s Kris Meeke taking third.

The competitors at the notorious “Monte”, also known as “The Unpredictable One”, faced extremely difficult weather and road conditions. Rain in the valleys and snow at altitude . As has often been the case in the past, tyre selection was the decisive factor at the “Monte”. Volkswagen ended the classic with all three Polo R WRCs in the points. Jari-Matti Latvala/Miikka Anttila and Andreas Mikkelsen/Mikko Markkula picked up valuable points in fifth and seventh place respectively. 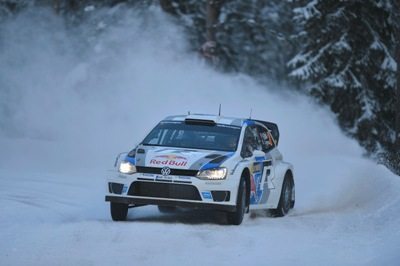 The sudden onset of winter in the French Maritime Alps and heavy rain in the valleys – the start of the Rally Monte Carlo literally caught everyone cold. Based on the weather data available, the Volkswagen drivers opted for virtually tread-free slicks for the first three special stages of the “Monte”. With the shock arrival of snow in the principality, this made driving a real challenge. Sébastien Ogier/Julien Ingrassia and their team-mates lost a lot of time in these conditions. The World Champions found themselves back in ninth place. They showed their undoubted class from the fifth stage onwards, however, finishing consistently in the top-three from then on in and winning seven special stages. By the midway point of the “Monte” they had moved into the lead and never looked back.

Weather conditions were so extreme that the 14th special stage of the Rally Monte Carlo had to be cancelled. So much snow fell on the notorious Col de Turini between the first and second loop on Saturday that the second run had to be neutralised, with some World Rally Cars stuck in the snow.

Sébastien Ogier’s team-mates Jari-Matti Latvala/Miikka Anttila twice thrilled fans at the Rally Monte Carlo with a remarkable comeback. On the Friday of the rally, “JML” fought his way back from 18th to seventh place overall. He then climbed another position on Saturday, before a puncture saw him drop back down the field. However, he had battled back from eighth to fifth by the end of the day. Latvala/Anttila were in the top-three on eight of the special stages at the “Monte”, clocking the fastest time on three occasions.

Lessons learned, points scored – Andreas Mikkelsen’s first outing in a World Rally Car at the Rally Monte Carlo was rewarded with six World Championship points. Together with co-driver Mikko Markkula, Mikkelsen showed the necessary caution on all 14 special stages. However, even that was not enough on the tenth stage: on slicks at the time, Mikkelsen/Markkula slid slowly off the snow-covered road in a slow corner between Sisteron and Thoard. Despite losing a lot of time they were able to continue, with the help of the fans, and capitalised with a series of top times on the final day.

Victory at the first rally of the year and two bonus points on the Power Stage mean the reigning World Champions lead the WRC after the opening act of 2014. Sébastien Ogier and Julien Ingrassia leave their home rally with 27 points to their name, while Jari-Matti Latvala and Miikka Anttila are fourth with 13 points, courtesy of their Power Stage victory. Volkswagen also holds an early lead in the Manufacturers’ Championship: 37 points went to Wolfsburg, 33 to Citroën.

“What a perfect start to the season!," Sebastien Ogier said. "The team did a fantastic job. I am overjoyed.

"It is an amazing feeling to win the Rally Monte Carlo in these difficult conditions – especially now that the Monte is a round of the World Championship again. For that reason, this win obviously ranks above the victory in the IRC in 2009 for Julien and me. Even more so when you consider the last three days: the fightback in extreme rain, and then the snow chaos on the Col de Turini. I really wanted to win my home rally here. I will celebrate the win appropriately – with my family, my girlfriend and the entire Volkswagen team.”