After the panel work dramas we had in Part 2, it's fair to say that we were a long way from where we wanted to be in our Escort Mk 2 rally car rebuild. There was still lots to be done, so we set about the next phase, which was to prepare the bodywork as best we could, before handing it over to another friend who had some other valuable skills. Hindsight is a wonderful thing, and looking back we should have first sent the car to a panel beater to get the bodywork sorted, but we had events lined up that we wanted the car for, and we were getting impatient. So, with that in mind it was delivered to our wrapping guru who set about putting a fresh yellow coat on the car. 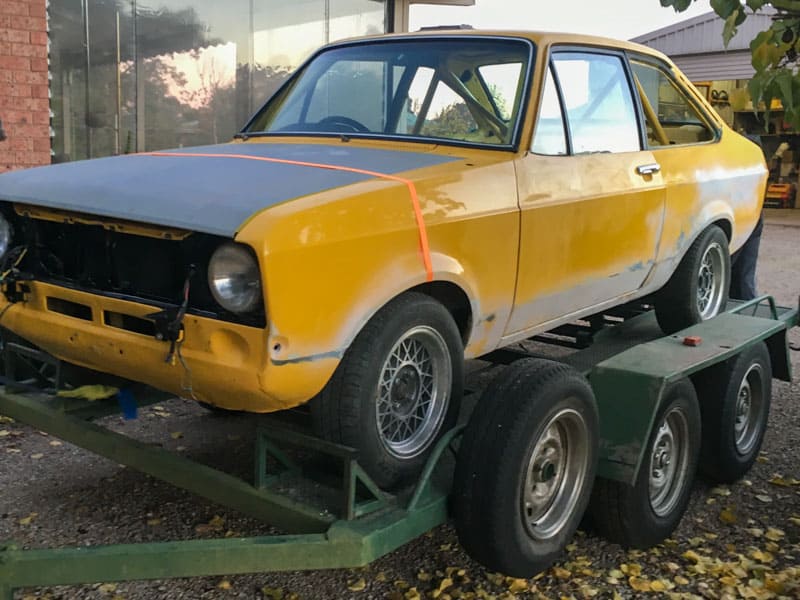 With the bodywork under prepared, it was back to the shed to do some our our own body prep before the car was sent to be vinyl wrapped. 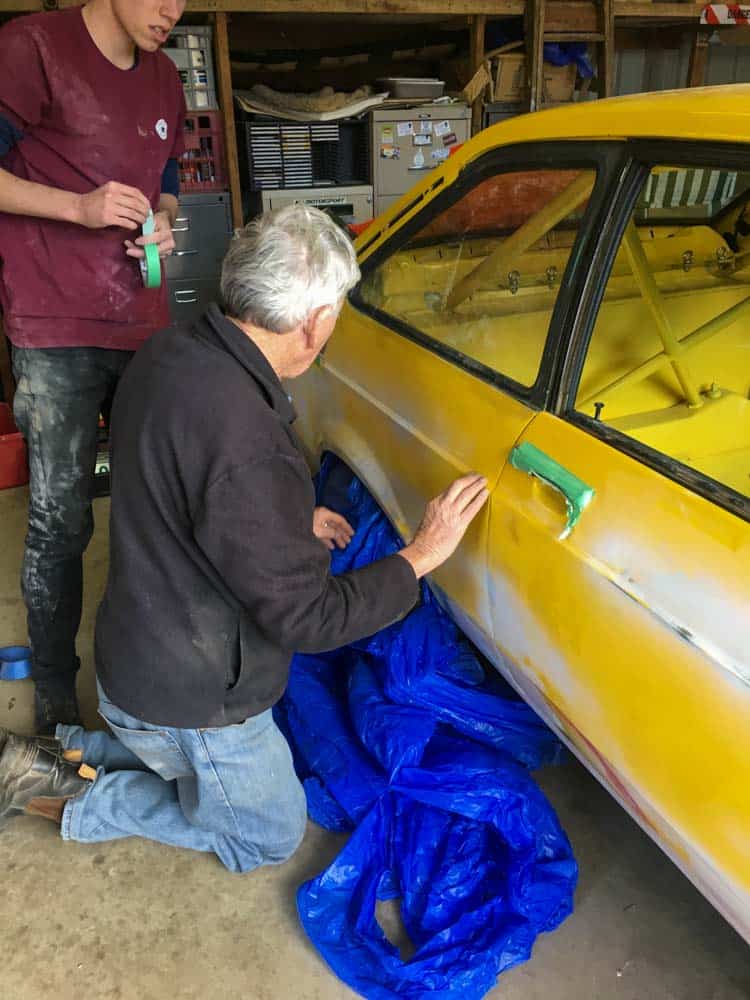 We had purchased 20 metres of yellow wrap and it looked the goods. Despite the cold July weather, we were able to heat the shed enough to get it to take to the bodywork pretty well. After a few days of trial and error, we had a finished product. It's worth pointing out here that while in theory, wrapping a car is a simple enough process, it's not something that you can do either on your own, or without plenty of practice. Getting it right is critical first time, and you can expect a few wasted lengths of vinyl along the way. 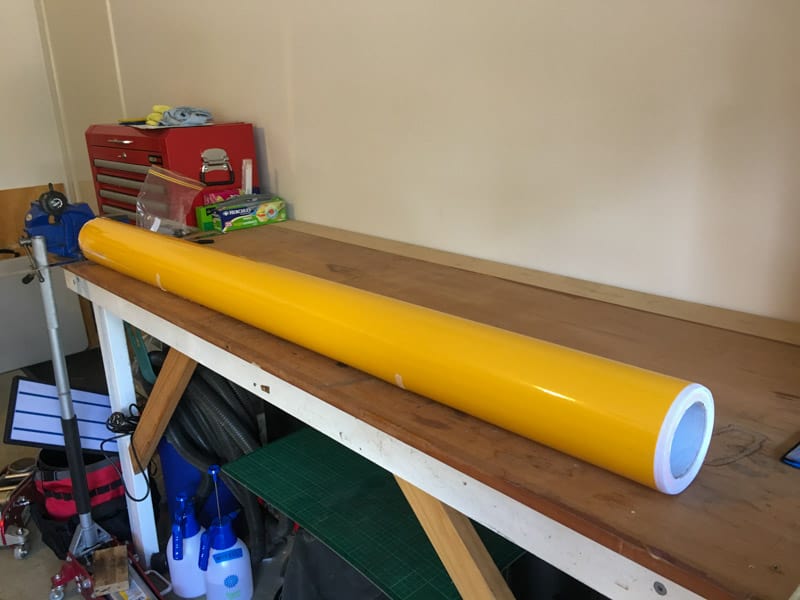 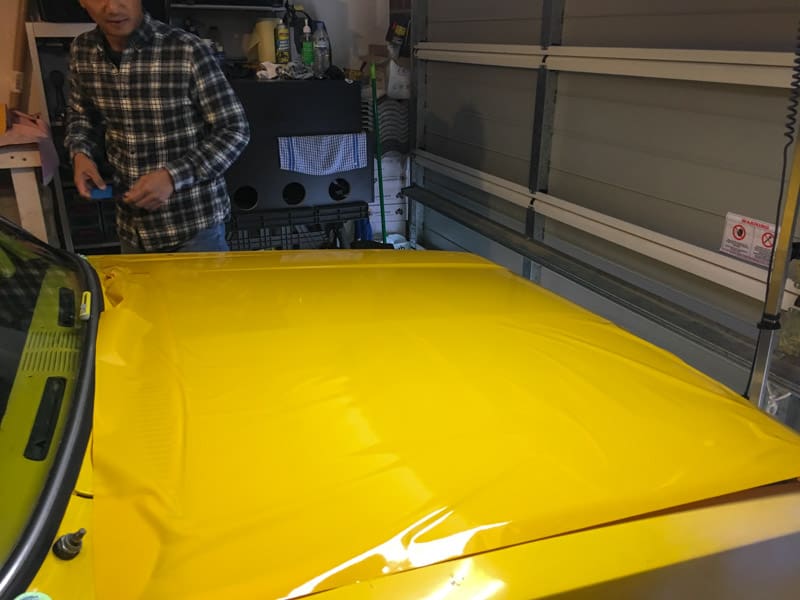 Wrapping a car is a tricky process that requires plenty of skill and practice.

We were pretty happy with the results. While there were sections of the car that had started to lift a little - particularly along the lines on the front mudguards - we expected these to flatten out once the car had been parked in the sun for an extended time and the vinyl had had time to settle in. With that in mind, we got the car back in the garage and started the long process of putting everything back together. New wiring had to be installed from the front of the car to the rear, tail lights and reverse lights had to be connected, and new LED headlights were installed (7" units from a Jeep Wrangler that happened to screw straight into the Escort grille). A few new gauges were added inside, and we installed a new Stilo intercom, and overall gave the car a general tidy up as we went along. It was really starting to come together. 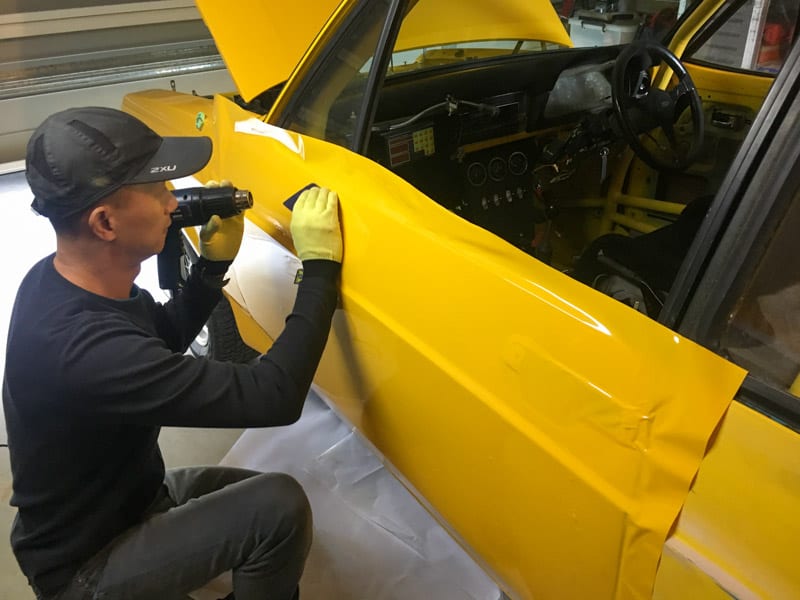 The yellow wrap went on well and we were confident of a good result. 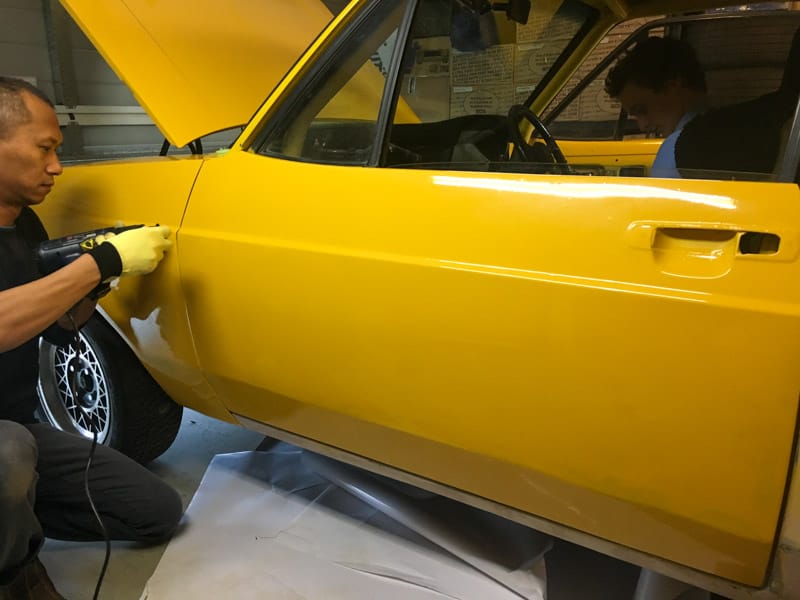 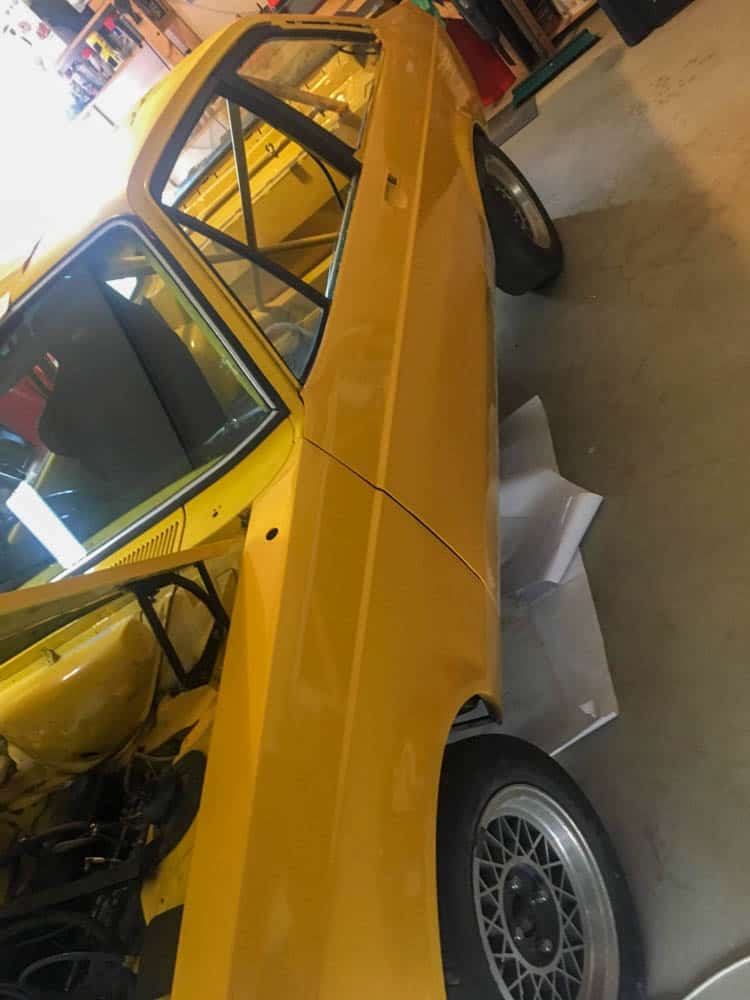 Time was running out though. A couple more event deadlines had come and gone and, worse still, the wrap still wasn't sticking as it should have. It turns out that the lack of preparation to the body shell was proving to be a real problem here. In essence, the wrap wasn't sticking to parts of the body that had been painted in undercoat. We knew this might have become an issue, although we were hoping that it wouldn't come to this. After a little head scratching and some discussions with another friend, an Irishman who was a gun panel beater and spray painter, it was decided that the wrap had to come off, and the car needed to be sent for paint, rather than vinyl. 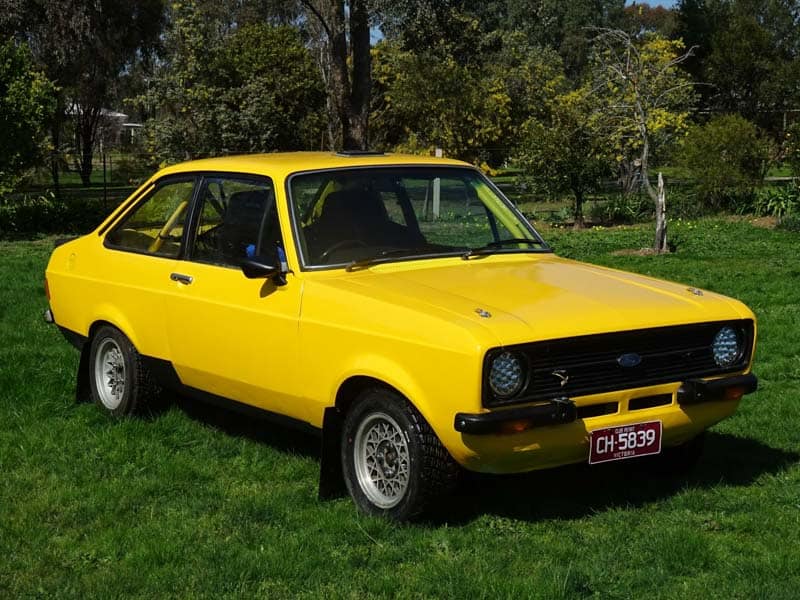 Fully wrapped, and with the new LED headlights fitted, the car was looking a treat. 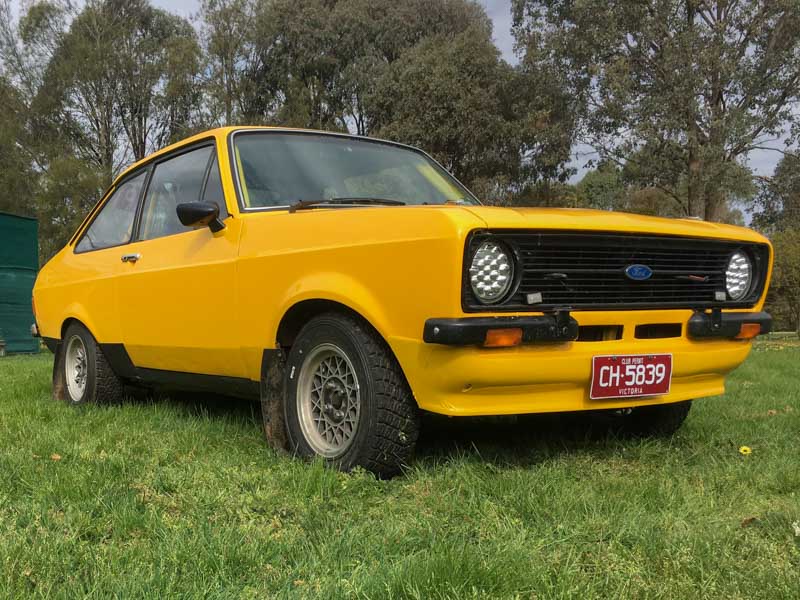 As frustrating as this was, it was the only logical answer. With parts of the wrap already proving problematic in good conditions, we expected that this would become a real issue once the car hit the gravel and was subject to dust, mud, water and rocks. So, it was out with the heat gun and off with the wrap. Surprisingly, it only took 15 minutes to remove the whole wrap from the car, and it came off incredibly easy with little or no residue left behind. It was the first win we'd had for weeks! With the car back on the trailer, it was off to the Irishman's shed for a month of prep and painting, which we'll cover next time. 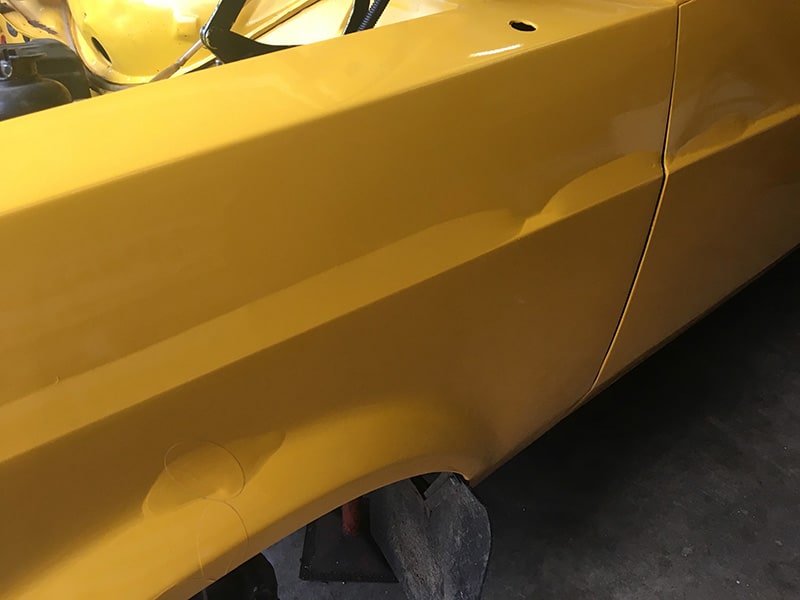 The wrap was lifting in critical places, and we weren't confident that this would improve over time.

Read the other parts: