After all the trials and tribulations involved in our Ford Escort rally car rebuild, the car was finally back together and ready for its first shakedown (or shakedown 2.0). Breaking the gearbox in half in our short 15km test was a major setback, but a replacement box was fitted with the close ratio Rocket gears installed. A few minor touches continued to be added as they car took shape, including a pair of carbon fibre rear arch guards imported from the UK. Landed in Australia for around $200, these would be perfect for protecting the new paint from stone chips. They were easy to fit too. They fitted the shape of the bodywork perfectly, and a few strategically placed screws secured the guards in place, followed by a couple of dabs of silastic to keep the moisture and dust out. 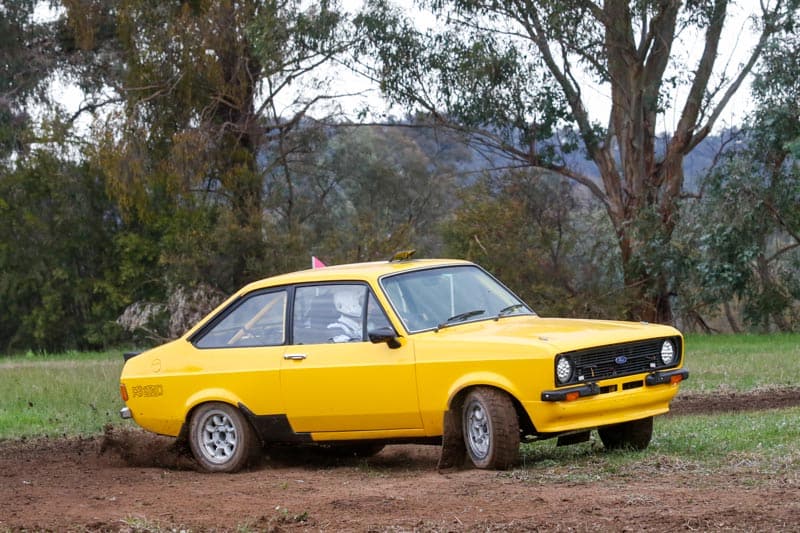 Our first event was a local club khanacross, held in a recreation reserve in wet and slippery conditions. All three of the Whitten / RSM crew (Peter, Luke and Matt) drove the car, and it performed faultlessly throughout the day. After a quick wash, it was now time for the final preparation before the car's rally debut in the Valley Stages Rally.

The event was a fifth round of the Victorian Rally Championship, and would be the first VRC round I had done for 20 years!

Part of the change since my last state round was the requirement for a new helmet and matching HANS device, an expense of around $1500. I understand that many people complain about the requirements for the frontal neck restraints, but I'm not one of them. Things can go wrong at any time in a rally, and the safer I am behind the wheel, the better I'll feel about it. And, with my son co-driving, it's simply a no-brainer. 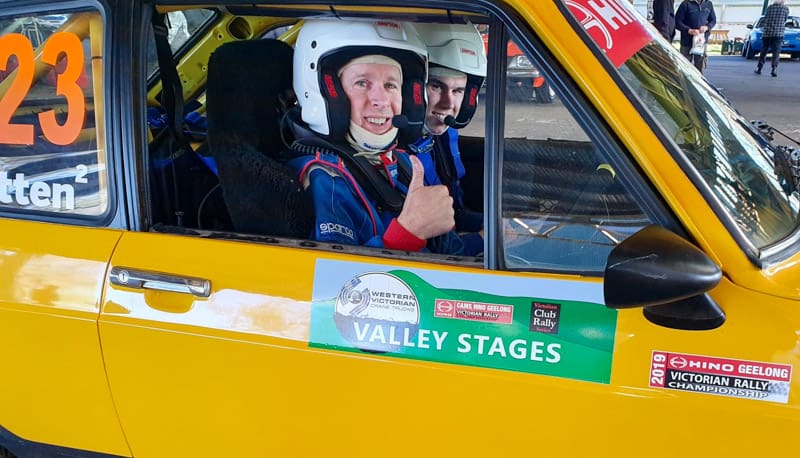 Peter and Luke ready for the start of the 2019 Valley Stages. Photo: Josh Dowell

Final preparations for the rally went pretty smoothly, and with the car on its way to the rally, Luke and I undertook the pre-event reconnaissance on the Saturday.

I'd driven on pace notes a few times in the past; twice at the Otago Rally in New Zealand, twice in the Rally of South Australia in Proton and Subaru media cars, and in a couple of club events.

However, this was the first time I'd really written my own notes, and it took some getting used to. We'd come up with a 1-7 system that seemed to work well, but doing recce at a maximum speed of 60km/h meant that estimating the speeds we'd be travelling the next day a little more difficult than we'd expected. Nevertheless, we got through the five stages twice each, with road conditions varying. The beautiful Mt Slide stage, for example, was wide and smooth, while some of the stages higher in the hills were checked in heavy rain and fog. An early night followed as we prepared to do battle with 71 other cars over 10 demanding stages. 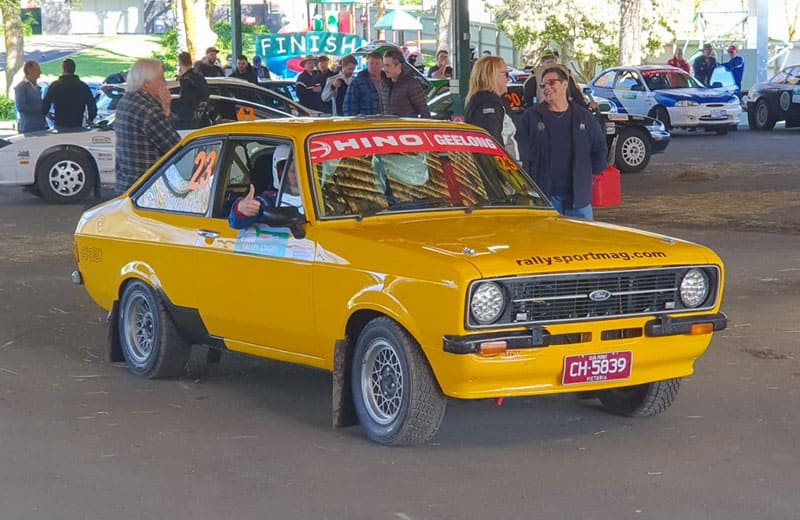 Thumbs up and ready for the start, the car was looking good. Photo: Troy Dowell

Our first problem came when we arrived at the service park. Paul "Golly" Mollison was already on hand attaching crew names on the windows, but we then discovered the car wouldn't start. Nothing we did could get it coaxed into action, even though it had started first kick when we took it off the trailer the night before. While Luke and I headed off for the driver's briefing, our crew of Troy, Josh and Matt set about trying to sort the problem. Eventually, a tow start got the car running. It seems that a long, cold Yarra Valley night was not what the 43-year old engine and electrics took a liking too. But the car was now running, and we were ready to get things underway.

Given the dramas we'd had just getting to the start, our plan was to simply to make it through the first five stages, get to the lunch break and then re-assess things.

Things started well on the first stage. The notes were working well, although they were a little ambitious in places, but we completed the stage around the middle of the VRC pack - not that position was our concern. The next stage, a rugged and tricky run up Marginal Road, started well, including some fast stretches and a couple of new bridges - the second of which was brand new, and had to be driven over at a maximum speed of just 30km/h. 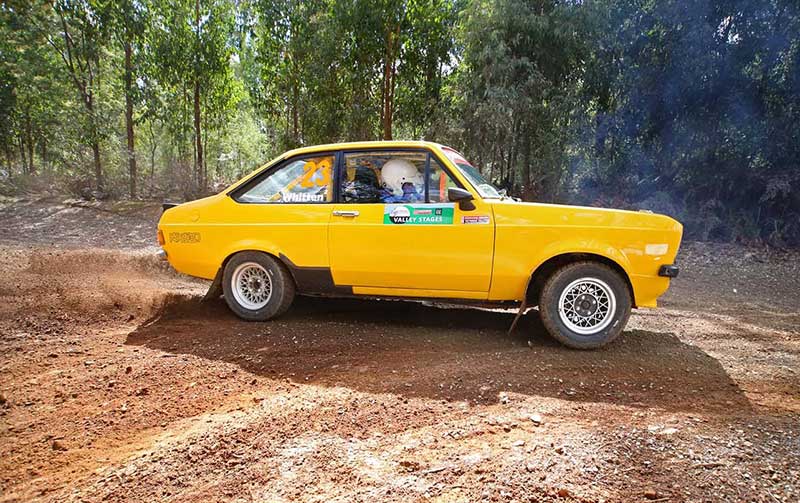 Things were running well for the first couple of stages, with the crew just warming up. Photo: John Doutch

This was another first for me. The RallySafe unit is a brilliant innovation that has made rallying much, much safer, and the speed readout ensured we didn't risk a penalty, or worse, exclusion. Once back up to full speed, we were just getting into the swing of the stage when, at the 8km mark, we were stopped after youngster Josh Bohm had crashed his Nissan Silvia heavily.

His car was blocking the stage, was very badly damaged, and had hit a tree stump at an impact of 14g (another feature of RallySafe).

When the stage was cleared, we toured out through the remaining 14 kilometres to the finish, ready to get it all underway again. Our rally wasn't to last much longer, however. Less than three kilometres into stage three, we rolled to a halt. The engine was running perfectly, but I couldn't select a gear, either with our without the clutch engaged. 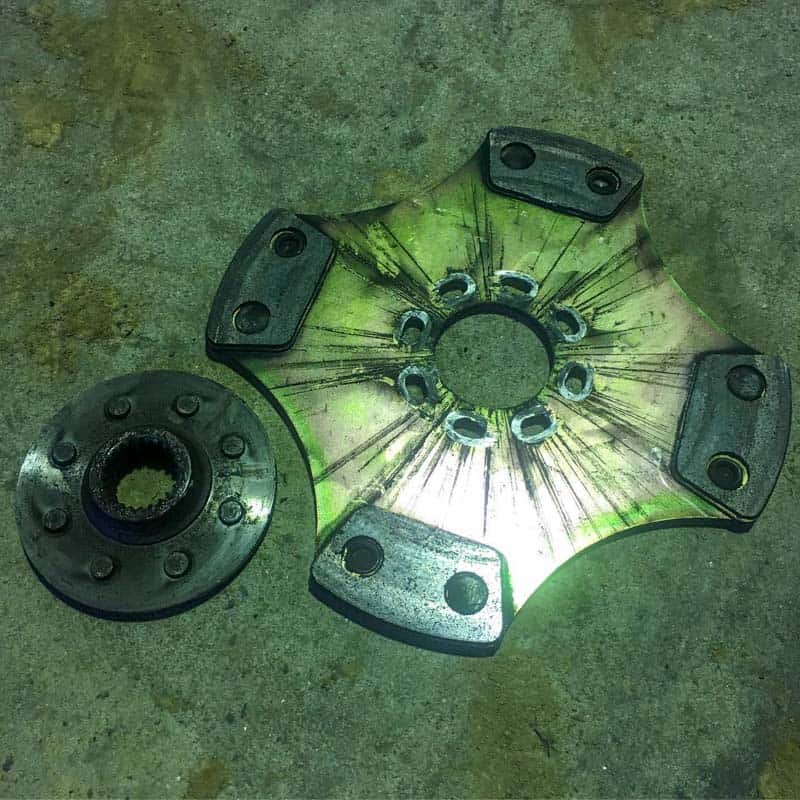 When the centre fell out of the button clutch, our rally came to a sudden end.

A quick check confirmed that the clutch cable was still operational, hinting that the centre of the clutch plate had more than likely failed. There was nothing left to do but spectate and wait for our service crew to come and retrieve us. It was a disappointing way to finish, but on the bright side, it was a relatively minor mechanical problem that we couldn't have anticipated. The clutch and pressure plate had been checked thoroughly during our rebuild and showed no signs of wear. Like many things in motorsport, it was just one of those things. The gearbox was removed the day after the rally, and a new clutch has been ordered and is awaiting delivery. Once that arrives, the car will be re-prepared and plans for our next event will begin – hopefully with a better end result next time.