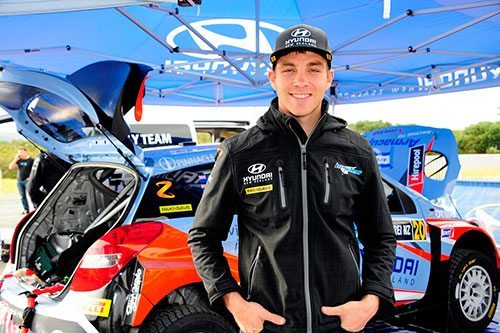 While the pair, who won their first WRC event in Argentina just a week ago, didn’t feature on the overall results of the 29 April – 1 May running of the International Rally of Whangarei due to driveshaft issues on Saturday, Paddon says he’s pleased with the car’s potential.

“We solved the mechanical problems which interrupted our run on Saturday, and have been able to get on top of a couple of small things from Otago, so overall we’re moving forward well with this car and the wider project to support New Zealand rallying,” said Paddon after winning all six of Sunday’s six special stages following the successful repair of the driveshaft problems.

The New Zealand-built Hyundai i20 rally car made its competition debut at Rally Otago earlier in April with Paddon and Kennard piloting the 1.8-litre, turbocharged machine to a record-smashing victory. The car’s chassis is built to new AP4 (Asia Pacific) regulations in conjunction with Andrew Hawkeswood of Force Motorsport – a set of regulations that Paddon sees offer great prospects in New Zealand. The Otago win followed some intensive pre-event preparation by the engineers and mechanics who have worked with Paddon during his local years of competition and now join him to work under the Hyundai New Zealand Rally Team banner. With limited testing since Otago due to Paddon’s WRC commitments, during Saturday’s first leg of competitive stages in Whangarei they experienced some driveshaft issues caused by the extra grip on the northern roads.

“It was something we hadn’t encountered before in testing or competition on the Otago roads, but having had to retire twice on Saturday, we obviously needed to find a solution, so the guys worked last night to do that. Obviously they solved the issue and the car ran well today to enable us to take the six stage wins.

“It was a lot of fun to be out on the stages today,” said Paddon of the event he and Kennard – from Geraldine and Blenheim respectively – have won four times previously, the last time in 2013. “We really enjoyed being back on these roads. It’s three years since we last did this rally and you forget how good the roads are up here. Jumping between the camber, the flow of the roads; it’s quite different to Dunedin and is absolutely unique in character, so it’s really nice to come back here again.”

Looking ahead with the project with the New Zealand-built i20 rally car, which is backed by Hyundai New Zealand and their nationwide dealer network, Paddon says: “We have a good base to work from with the new car now – there’s still some development that needs to be done, but in the meantime, while we’re back in Europe and WRC competition, the car will travel the country around all the Hyundai dealers for their customer events and displays. We’ve got time to talk with our partners at Hyundai New Zealand to make a plan for the future with the car and the wider project, not just for this year, but next year as well.”

A key part of the Paddon-Hyundai New Zealand joint project is the inclusion of students who participate in a Hyundai New Zealand-backed mentoring programme for talented, passionate teenagers 15-18 years old called the Pinnacle Programme. Matthew Mallett, a mechanical student from Hamilton’s Wintec, joined the team at Rally Otago, and at Whangarei, Tony Pavich, a WINTEC student, enjoyed the opportunity to work alongside Paddon’s engineers.

“Tony got his hands dirty, taking the opportunity in both hands to get involved and learn. He’s been very enthusiastic, which is great to see. Matthew, who helped at Otago, was in Whangarei with Dylan Turner’s team – from Otago being his first rally and now seeing him back at the next event, that it’s not just a one-off thing, is really satisfying to see.”

Hyundai New Zealand welcomed a large group of customers and dealer network personnel to a dedicated hospitality area at Rally Whangarei where they made the most of the chance to talk with Paddon and Kennard as their competitive schedule allowed. Some customers also enjoyed helicopter viewing of the spectacular Northland rally stages.

“Hyundai guests and dealer personnel enjoyed another fantastic weekend watching Hayden and John in action,” said Sinclair. “Despite the challenges of technical issues with the car, the opportunity to see a driver/co-driver combination of Hayden and John’s calibre in action, in person, is not one you’ll forget in a hurry.”

Paddon reported that the spectator numbers were again very strong. “There were a lot of people out on the stages, more than what we’ve seen in the past and many in our Hyundai jackets and caps. It’s fantastic to see the enthusiasm of everyone at Hyundai New Zealand who’s involved in the project. To have them out watching and supporting what we do is great and being able to introduce more people to the sport of rallying, and see how they’ve embraced it, is another brilliant aspect of this partnership.”

Paddon now returns to Europe to prepare for the 19-22 May running of Rally Portugal in his new generation Hyundai i20 WRC car with Hyundai Motorsport.