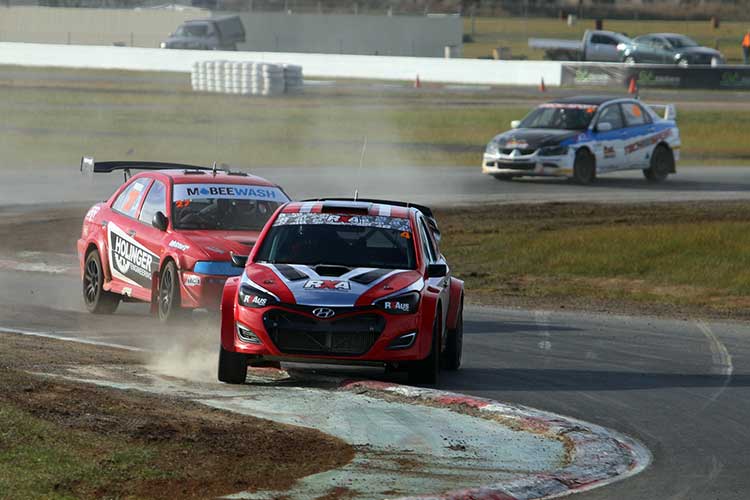 Justin Dowel leads Will Orders during a RallyX heat at Winton.

The pressure remains firmly on the leaders of each RXAus.com.au Australian Rallycross Series class, heading into the penultimate round of the 2017 series this Sunday.

The championship returns to the Marulan circuit in country New South Wales for the third time and though the respective leaders of each class have substantial leading margins, the championship remains far from over.

The RXAus.com.au points system means one poor round can quickly shift the balance of power, placing an emphasis on key contenders to show consistency this weekend.

Justin Dowel’s comfortable lead in the All-wheel-drive standings belies what has been a ferocious battle in the series’ fastest class between he, son Troy Dowel and close rivals Will Orders and Steve Glenney.

Dowel Snr leads Troy by 102 points heading into Sunday’s race, with Orders slipping to third place – only four further behind – after a shocking round at Winton saw him fail to start the final and Super Finals at that event.

Dowel and Orders in particular have battled ferociously this year, with the Hyundai driver having won six heat races to five for Orders’ Evo.

Orders has the edge in the class finals with three wins to Dowel’s one, but it’s the former Australian Rally Champion’s consistency that has seen the Hyundai rocket to the big championship lead.

Troy Dowel’s VW Polo has won three AWD heats this year and won his class final twice, while a stirring drive to second in the Super Final at Winton also helped his points haul.

Two-wheel-drive class leader Mike Conway has won more than any other driver in RXAus this year; scoring 10 heat race victories and three of the four available class finals to edge out a 60-point margin over nearest rival Troy Dowel.

Dowel, who has contested both 2WD and AWD at every RXAus round this year, has used his consistency to keep his Ford Fiesta in the hunt.

Scott Anderson and Arron Windus were late joining the 2WD fray this year however both rocketed up the standings at Winton and now find themselves battling for third in the championship – just 15 points between the pair.

Windus suffered a heavy crash in the 2WD SuperFinal at Winton, however returns in the same Mazda 2 this weekend after an impressive repair effort between rounds.

Ronnie Bustard enjoys a comfortable margin in the Excel Cup standings, while Troy Dowel sits in a similar position in the Junior class standings.

The series’ final visit to the Marulan circuit this Sunday (August 13) will see the action-packed program commence just after 9:00am.

Admission to the circuit remains free to all spectators, with full details at www.rxaus.com.au.