The most keenly anticipated edition of the Brian Green Property Group New Zealand Rally Championship in recent memory is now just days away from commencing at the DriveSouth Otago Rally.

David Holder (back left) will drive Hyundai New Zealand's i20 AP4+ (Photo: Geoff Ridder)Another change sees four-wheel drive championship cars unable to drop a round, although the rule became irrelevant in 2016 when not one registered competitor completed every stage. Categories two, three and four continue to be able to drop a round, with the Gull Challenge scoring best four from six.

More than 50 entries sees the largest championship field on record and with quantity comes quality, with such a depth of entry that even the most vocal rally fans are unwilling to stick their neck out and predict a champion before the season opener.

Defending champion, David Holder, has secured a seat in the Hyundai New Zealand AP4+ i20 for the opening two rounds of the series, but has nothing confirmed after round two, Rally Whangarei. After that the car will be split between WRC star Hayden Paddon and last year’s Hyundai young driver scholarship winner Job Quantock.

Last season at Otago, Holder was able to claim third place in a Mitsubishi Evo 8 before a win at Whangarei really put him forward as the favourite for the title.

Chasing him on the road will be 2015 champion Ben Hunt. To say that the 2016 season was one Hunt would want to forget is an understatement, with the highlight being second to Paddon at Otago’s season opener, before four consecutive DNFs, including two sizable rollovers saw him finish the season in 16th place.

However, he and his team have been hard at work over the off season looking to get the best out of their latest generation Subaru Impreza, and a return to the dominance that took him to the 2015 title is a strong possibility.

Another to suffer an unlucky 2016 was Matt Summerfield, who once again teams up with his sister Nicole in their Subaru. The pair were let down by reliability issues throughout the first three rounds of the 2016 season, despite some blinding speed. That was shown at the final round of the championship when the pair came home in second place behind Brendan Reeves. A strong recent showing, including five out of eight stage wins enroute to second place in the Westland Rally, shows the Summerfields will be in with a shot at the series opener.

Last year’s championship runner-up was Sloan Cox. The Rotorua driver showed plenty of speed across the 2016 season, but had niggling car problems in the Mitsubishi Evo 10 that kept him off the podium in every event. Despite that fact, he was still able to claim the runner-up spot at year’s end, as well as securing his second junior title. This year sees a change in the co-driver’s seat with Sarah Coatsworth coming back into the car, having only contested one round with Cox in 2016. If the team can get on top of the niggles that cost them so dearly in 2016, the rest of the field will need to look out.

The first of the AP4 cars seeded at Otago is Emma Gilmour. After some 12 years of trying, Gilmour was finally able to crack her first round win at Canterbury in 2016 and with two rounds remaining was only a handful of points away from eventual champion Holder, but an engine failure at Gisborne and subsequent problems that saw her unable to start Coromandel meant she would slip to sixth. Experts suggest the first win is the hardest, and with the monkey off her back, Gilmour will certainly be a contender in 2017. 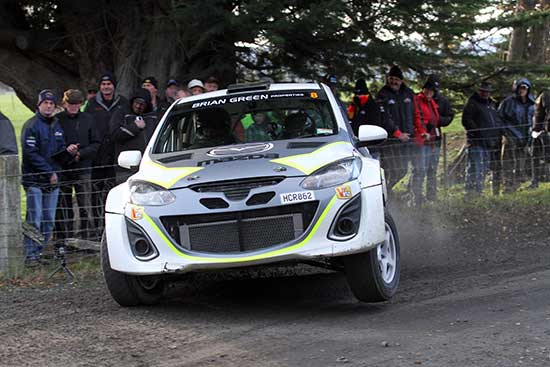 Andrew Hawkeswood is chasing his first NZ Rally Championship title. (Photo: Peter Whitten)Sixth on the road is Andrew Hawkeswood. With more than 20 years since his NZRC debut, Hawkeswood still has the title of national rally champion on his bucket list and has earmarked the 2017 season for a serious crack. With a season under his belt in the AP4 Mazda, and strong form in pre-season rallysprints, Hawkeswood is being picked by many as a favourite for the title this year. The telling factor as the year goes on will be when the team’s new 1600cc car hits the stages, but Hawkeswood has the luxury of last year’s 1800cc AP4+ car until he is confident his new car is fast and reliable.

Another driver who will debut a new car after the opening round is Dylan Turner. For Otago, Turner will use the ex-Dean Sumner championship winning Mitsubishi Evo 9 currently owned by Rhys Gardner, before moving to an AP4 car to be announced shortly. This year also sees a return of Turner’s partnership with Malcolm Read, after a season apart.

Seeded eighth, Darren Galbraith has moved to the outright title chase for the first time after winning the Gull Rally Challenge two years running. For the first time, Galbraith has a vehicle capable of challenging for outright victories and with the experience of Rocky Hudson in the co-driver’s seat, will be a genuine title threat.

Ninth on the road for the opening round, Glenn Inkster will benefit from a season behind the wheel after driving his new car for the first time enroute to the start control at Otago last year. This year, Inkster will have the experience of three-time national champion, Neil Allport, in his corner as a mentor, and with his team looking after the Skoda after several years away from gravel rallying.

Rounding out the top 10 is Mr. Consistent, Graham Featherstone. Over the past few years, Feathers, as he is known around the service park, has made a habit of being at the finish all the time and generally being there or there abouts. Featherstone turns up for the third season with co-driver Dave Devenport, so keep an eye on the ex-Hawkeswood Evo 7.

On top of that, Dave Strong returns to the four-wheel drive ranks in his ex-Britek Ford Fiesta S2000, now powered by a Honda 3.5 litre V6, and with a Sadev gearbox with slightly more favourable ratios. Also returning is series sponsor Brian Green in the Team Ralliart Mitsubishi Mirage, and with some early running in the car this season, expect some good times from the veteran.

At the other end of the experience scale is Hyundai Young Driver Scholarship winner Job Quantock, who will contest the Canterbury and Waitomo rounds in the Hyundai Holder is campaigning, but will run his Mitsubishi Evo 7 in the remaining rounds. David Thexton rounds out the Outright four-wheel drive challenge field in his Subaru.

As the season carries on, expect further entries to join the class, including Australian-based Irishman Richie Dalton (Ford Fiesta) and former Bathurst champion Greg Murphy (Holden Barina AP4), while Phil Campbell could well be seen at several North Island rounds while the team build a Ford Fiesta AP4 car, with the intention of debuting the car at Rally New Zealand in November.

A shake up of Category 2 has seen all front-wheel drive cars up to two-litre able to enter the class, outside of the previous homologated two-wheel drive cars the class previously catered for. This has combined with a surge of talented young drivers coming through the ranks. 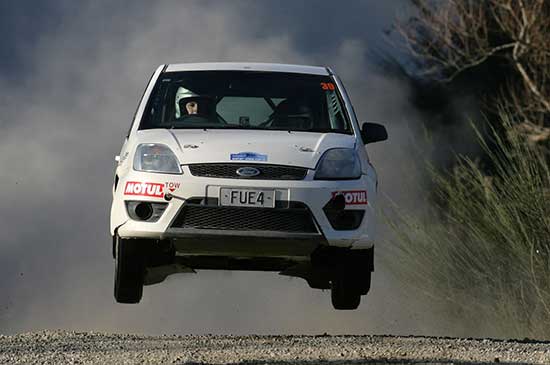 Chris McLean hopes to be one of the leading 2WD competitors in his Ford Fiesta. (Photo: Euan Cameron)The class will see four Ford Fiesta STs for Dylan Thomson as well as rookies Ari Pettigrew, Chris McLean and Max Tregilgas, plus a Toyota Levin for Robbie Stokes, son of two-time national champion Brian Stokes. The youngest driver in the class is 16-year old Jack Hawkeswood, who will campaign a Mazda 2 AP4 shelled car identical to his father Andrew, but with a two-litre naturally aspirated engine and front-wheel drive gearbox.

This class is expected to be one of the highlights of the season, with big things expected of many of the drivers in the class, all of whom have shown potential in previous events.

The open two-wheel drive class is another set for a fascinating battle. Top seed for the opening round is Irish YouTube sensation Frank Kelly, although he is ineligible to score points as he is running on an Irish licence.

Chasing him hard will be Welshman Anthony Jones, who finished second in the class last year in another MKII Escort. Jones will use last year’s car at Otago, before his new Millington-powered car will be ready to go from Whangarei. Wayne Pittams is another with a Millington Escort that will be ready for Whangarei, but without a spare car he will miss the opening round, as will Marcus van Klink, who is chasing the Otago Classic Rally before the championship debut of his triple rotor Mazda RX-8.

Those chasing Kelly and Jones, however, will be Jeff Ward in a wild looking and performing Hillman Hunter, powered by an Oldsmobile V8, and Jack Williamson, who has turbocharged his Suzuki Swift from last year, as well as strapping on some serious brakes normally found on a Skoda Fabia S2000 car.

The Historic class sees seven entries for the opening round, led by former champions Regan Ross and Marcus van Klink. It is expected Ross will miss round two in Whangarei and van Klink will switch to his RX-8 and open two-wheel drive duties after Otago, but Tony Gosling and John Silcock will be expected to continue the Ford vs Mazda classic battle as the season continues on.

However, one slip up will see the likes of Paul Fraser (Escort) and the Mitsubishis of Graeme Coey and 2009 class champion, Mike Cameron, in with a sniff.

The class also encompasses the Group A Challenge, which has three entries for the opening round of the season. Leading these is Phil Collins in his Audi Quattro, with competition coming from Ben Brown’s Evo 1 and Stewart Thorp’s Mitsubishi VR-4.

The two-wheel drive section of the Gull Challenge sees a well spread entry with the modern powered MkII Escorts of Deane Buist and Robert McCallum expected to set the pace, but the Honda Civic of David Taylor and 1600cc powered Toyota Starlet of Dan Alexander will be sweating on a mistake from the pair to score some valuable points early on.

With 280km of special stages that vary from the flat out blasts around Lawrence to the tight and twisting Waipori Gorge, this is one event that will test each and every one of the 51 startersk and with so many competitive entries, not to mention removing the drop a round rule for the four-wheel drive class, making a good sold start to the season will be crucial.