The final round of the 2016 World Rally Championship, the last time the current World Rally Cars will be seen in the hands of the team drivers, is Kennards Hire Rally Australia.

The Coffs Harbour super stage under construction, showing artificial sand "dunes".The Coffs Harbour territory in the mid-north coast of New South Wales, about 540km north of Sydney and 390km south of Brisbane, is one of the largest urban centres in the North Coast region, and is familiar territory to the WRC, being the fifth time the event will be based there.

This time the gravel event it is being run two months later in the year (November instead of September), in warmer conditions.

Normally this change in the calendar date means drier and dustier conditions, but the weather is unpredictable.  There has been recent rain in the area.

The first time the event was at this location it had been unexpectedly wet and the world champion, Sebastien Loeb, crashed because his Citroen was on unsuitable tyres.  The FIA then had to change the tyre availability rules after that!

Special features are the two super special locations.  Halfway down the road to Nambucca Heads stage is the new Raleigh rallycross course near Repton, which will be used late morning on both the Friday and Saturday, while both these days end with a double run around a special course on the edge of the sea in Coffs Harbour.

The spectator stages have been prepared with care.  The rallycross circuit has cars driving in a double loop in a valley amphitheatre surrounded by eucalyptus trees, while the Coffs Harbour stage has specially constructed dunes alongside the track, to emphasise the seaside atmosphere.

Several of the traditional roads through forests have been widened, and the Bucca stage on the Saturday has had a chicane added to reduce speed.

Special feature of the event is the final appearance of the Volkswagen team that is being disbanded after the event.

36 crews have entered, the highest WRC entry for this event since Australia 2009, and it is the biggest entry for any ”long-haul” WRC event since Argentina 2015.

There are 10 World Rally Cars (nine official team cars, plus one for Lorenzo Bertelli), only six R5 cars and one car in WRC3 (predictably Michel Fabre’s Citroen), but the number of entries has been bolstered by 14 cars entered under ASN rules, which admit some cars that are not internationally homologated.

The only major championship waiting to be resolved is WRC2, with all eyes on the single remaining Skoda Motorsport entry for Esapekka Lappi, their supporting entry for Jan Kopecky being cancelled when there was found to be no supporting role he could play.

First or second place in the WRC2 category will give Lappi the title.

There will be a fierce battle on the event for the national championship victory between Simon Evans (251 points), Molly Taylor (246) and Harry Bates (245). 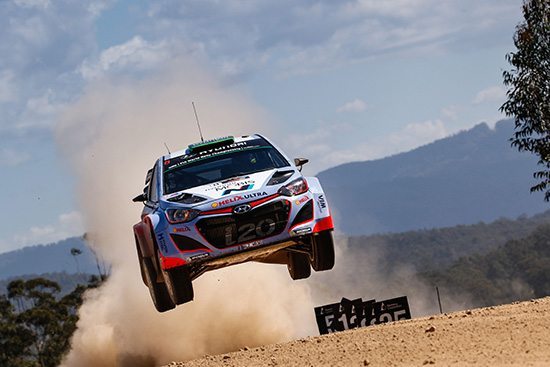 No WRC cars entered, and only two DS3 R5 cars including Michel Fabre, who will finish second in WRC3.

Problems experienced at WRGB centred around traction trouble on Meeke’s car and the distraction of a double puncture on the Saturday.

With development work on the 2017 car on schedule, the next rally car project for Citroen Racing will be the C3 R5, expected to be available for the 2018 season. Immediate activity will be the French Citroen Racing Trophy shoot-out at Rally du Var.

Announcement about the 2017 team and car presentation expected this week.

Back to roots: Australia is where the Hyundai international rally project started 16 years ago at Rally Australia.

Same cars as used in Catalunya, but this time Paddon will drive in the second Shell team car and Sordo in the Mobis team car.  All three drivers have the chance of taking second place in the Drivers’ championship, but the team has never yet achieved a podium result on this event.

Team presentation of cars and crews for 2017 is due to take place at Monza on December 1st.  The team’s development R5 car is due to reappear again with Kevin Abbring at Rallye du Var, notwithstanding the double retirement with customer cars at Rallye du Condroz-Huy, both with broken sumps.

Meanwhile in New Zealand, the specially built “AP4” development car is due to reappear, now the finalists in the national find-a-driver national rally programme have been announced.

Usual cars once again for the final time before they are to be sold in time for next season.   A popular event for the team, enjoying the local welcome and especially the Thursday evening Rally Show.

Biggest concern is the huge difference in character of the event if the weather suddenly changes from dry to wet.  Hard compound tyres are Michelin's preferred options with only limited quantities of soft compound tyres.

The later date creates time difficulties for teams as they restock the equipment in the long haul support containers, especially as the new 2017 cars will demand different pieces.

No decision yet about a scheduled presentation for the 2017 crews and cars.  2017 development has proceeded apace with a recent spectacular test session held in very snowy conditions in the French Ardeche region.

No news is expected before the end of the year concerning M-Sport’s bid to be considered as official supplier for the 2017 FIA Junior championship.

Final appearance of their all-conquering WRC team before the team is disbanded at the end of he season. They will run the same three cars they used at the Catalunya Rally.

Will their rally story end with another win, considering Ogier will run first car on the road for the first two days, especially if it will be dry?

Opinions about Coffs Harbour?  "Nice, but a lot of drivers would like to go to New Zealand again one day".

Driveshaft problems at WRGB were put down to "very small details that were easily fixed and did not recur".

No comment was available concerning the proposed future work by the team on new technology. Expect a display of heartfelt emotions on Sunday afternoon.