Round 10 of the 2016 WRC season takes the world championship to what is arguably considered the definitive asphalt rally of the sport, the Tour de Corse, held in the French Mediterranean island of Corsica.

Corsica is widely viewed as the spiritual home of France’s WRC event.  After five years being run in metropolitan France in the Alsace region, the Rallye de France returned to Corsica last year and immediately suffered from torrential rain storms, which led to cancellation and shortening of stages.

Even before the bad weather arrived the 2015 event was laid out in an unpopular format, being based in the town of Corte in the middle of the island.  Having learned lessons from the highly unpopular route for the 2015 event, a completely fresh route has been planned for France’s 2016 WRC event.

Basically the rally is now based at Bastia airport in the north of the island, with better accommodation facilities for the teams and where the headquarters and the service park will be located.  Shakedown will be close to Bastia.

The start will be at Ajaccio in the south west of the island, with no service points except for refuelling and tyre change points on the Friday until the cars return to Bastia that night.  While the overnight halts on Friday and Saturday will be at Bastia, the finish will be in the east coast town of Porto Vecchio.

The spirit of the “Tour” has been maintained!  There are only six different stages on the event itself, four of the venues each run twice, and on the final morning two stages run once each.

Although many classic stages that were popular in earlier days are missing, the stages are well planned so that the location of the stages are scattered in different areas of the island.  Total stage distance is 390km, making this a long event.

This represents an impressive 33% of the total route, but there are only five service halts during the rally.  There are six stage locations, four of them run twice, meaning there is an emphasis on long stages.  These long stages mean the already challenging problem of correct tyre choice to cater for prevailing weather conditions will be even more demanding.

One curious consequence of fewer stages is that the penalising effect of “Rally 2” will be reduced, in view of the reduced number of occasions each day on which the penalty can be imposed.

There will be subsidiary events for classic cars and for ladies.  Once again, the early autumn calendar date brings seasonal challenge to the rally, with leaves and chestnuts beginning to fall on the road and the risk of wild boars scavenging for food on the road.

77 crews have entered, 12 with World Rally Cars, including 15 national category cars.  There are 20 R5 cars, including three Hyundai i20 R5s (the model making its world debut in competition) with one official entry for Kevin Abbring, and private entries for Stephane Sarrazin and Fabio Andolfi.

Interestingly, the only traditional “N4” entries on the list are one Mitsubishi and one Subaru.  There is a very poor entry in WRC2, only one of the top seven drivers in the current championship standings is to take part.  This is Elfyn Evans on his final permitted R5 points-scoring event of the season.

Currently Elfyn stands two points ahead of Teemu Suninen, who has one event in hand over Evans and who is entered on this event on a non-scoring basis.

The event qualifies as a round of the Junior WRC series in which all the top drivers are to appear, while in the associated WRC3 category, this is an event when R2 driver, Fabio Andolfi, moves up to an R5 and Renault turbo driver, Michel Fabre, avoids a points scoring confrontation with the Junior Citroen drivers.

This event does not count for the Drive DMack Fiesta Trophy.  Other notable non-championship entries include Francois Delecour in a Skoda R5, and Bryan Bouffier in a Citroen R5. 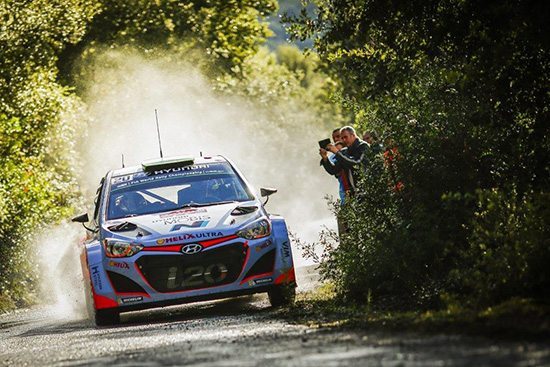 Hyundai drivers tested their 2016 i20s the weekend before Corsica.TEAM NEWS

Same cars as in Finland.  Main news is the re-scheduling of their drivers programme, due to Stephane Lefebvre’s continued ongoing recovery after his Germany accident. Finally there will be a head-to-head battle between their Irish drivers Kris Meeke and Craig Breen, this being Breen’s first asphalt event in the championship in a World Rally Car, which is due to be repeated in Spain on Round 11.

The cancellation of China did not change much, where there was only due to be a one car entry for Meeke.  There was a half-day test in Corsica for each driver.

Corsica will be the penultimate round of the Junior WRC which Simone Tempestini is leading comfortably, and could be crowned Champion on this event.  Tempestini also leads the WRC3 series, for which Junior drivers are eligible, from Michel Fabre, whose tactic of gaining points on events which do not offer points for the Junior series (and are less likely to enter) was thwarted when China Rally was cancelled.

Happy memories from Germany, despite Thierry Neuville’s handling difficulties and less-than-ideal tyre selection choices.  All three team cars are the same as for Germany.

After considerable 2017 car testing in the past month, the 2016 cars were tested the weekend before the event, with one day also for Abbring in the R5.

Main team news is the competition arrival of the R5 car and the decision to run an R5 for Abbring as an official entry.  There was no unexpected activity because of the cancellation of China, though Hayden Paddon had the chance to return home to New Zealand, while the team’s equipment was forwarded to Australia earlier than expected.  The planned pre-China test was used instead as a Spanish test.

Reflection from Germany: the reason for Ott Tanak’s alternator problem still not resolved.  Outside the WRC the team has been busy at the British championship media day, and then Eric Camilli attended the British Rally Day at Castle Combe.

Special occasion is that Mads Ostberg is due to make his 100th WRC start at this event.  Mads is still statistically in the Drivers’ championship race, but Camilli and Tanak are now both out of the running.

There was no official team testing for Corsica, although Lorenzo Bertelli had a one-day test.  Usual cars for Ostberg, Camilli and Tanak, while Elfyn Evans has another brand new R5, chassis 178.  This will be the first competitive event for DMack tyres in Corsica.

No news yet why Jari-Matti Latvala had transmission trouble in Germany.  The chances for 2013-2015 World Rally Champion and current 2016 leader Sebastien Ogier to win his fourth world championship title in Corsica are slender.  He has never won in Corsica.

He is 59 points ahead of fellow VW colleague, Andreas Mikkelsen, but no fewer than seven drivers can still be world champion this year - the three Volkswagen drivers, the three regular Hyundai drivers, and the M-Sport driver Mads Ostberg.

There is no chance for an early title for Volkswagen in the Manufacturers’ championship, while both Hyundai and M-Sport can statistically become champions instead.

About the prospect of having Meeke at the event, Ogier said: “It will be exciting to have a good fight with Kris, but I will not go 100%.  It would be stupid.  I still have the championship to be done.”

Ogier and Mikkelsen have their Finland cars, Latvala his Argentina car.