By any account, the penultimate round of the 2016 WRC will be a memorable occasion, even if the entry list for the all-gravel Wales Rally GB itself does not provide any unexpected surprises.

It will be the final time that the top works teams will run their current specification cars in Europe before they move on to newer and faster cars next year, and the third WRC event to run this year within one month.  It is being run this time in October, rather than November, hopefully with more agreeable weather than is traditional for Britain’s round of the series.

There are two other notable highlights which, by virtue of a passage control and one spectator friendly stage, the event sneaks momentarily out of Wales and into neighbouring England, for the first time since 1999.  Main media attention will be focused on the race to various FIA championship titles, or to the runner-up awards.

Apart from Friday evening’s venture to Chester and Saturday’s visit to the Cholmondeley (say like “Chumly”!) Castle super special estate, the three day route is familiar.  After two years, the Ceremonial Start returns to Colwyn Bay and on Sunday the Ceremonial Finish will go back to Llandudno.

There are only four visits to the central service park, on Friday evening, early morning and late afternoon on Saturday, and Sunday morning.  There is no midday service during the rally expect for tyre zones.  Special curiosity on the Saturday is a road section that uses the very steep, spectacular, but weather sensitive, Bwlch-y-Groes mountain pass, thought to be the first time this WRC event has used this road.

Entry-wise there are 16 World Rally Cars and 21 entries in WRC2, but out of the 66 entries only 21 are non-championship drivers, including some R5 prize drivers and also a Citroen WRC drive for Quentin Gilbert. 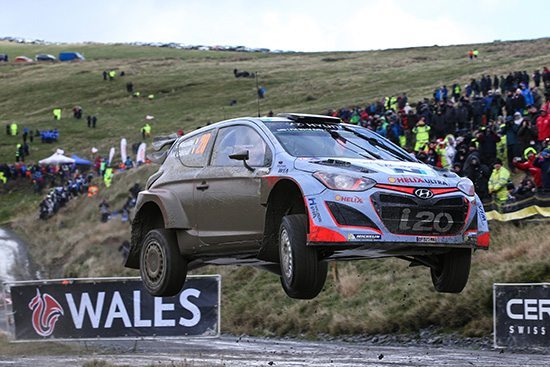 Hyundai will be hoping for their best Rally GB result yet.Sadly the British national champion Elfyn Evans, who had hoped for a WRC drive, will not start.  Shortage of available current specification World Rally Cars at M-Sport is the reason, and notably there is no entry for Henning Solberg, who for this reason did not take up his entry at Rally Catalunya.

Wales sees the WRC return for Stephane Lefebvre after his accident in Germany, but with a replacement co-driver, Gilles de Turckheim.

Compensation for spectators will be the 82 entries in the national category event, in an eclectic selection of rally cars including 2-litre World Rally Cars banned in the world championship.

In the Drivers’ World Rally Championship, having been settled in favour of Sebastien Ogier, the race is on for second place between Andreas Mikkelsen and Thierry Neuville, currently tying for second place, but Hayden Paddon, Dani Sordo, Jari-Matti Latvala and Mads Ostberg can all mathematically end up in runner-up slot.

In WRC2 the season of Fiesta driving leader, Elfyn Evans, already ended and he waits anxiously to see whether any of his Skoda driving rivals Teemu Suninen, Esapekka Lappi and Jan Kopcecky will be able to overtake his championship points score.  And all are due to be in Wales.

Whether they will then go on to the final round in Australia depends on their standings on Sunday night.

Four drivers are still able to win the WRC3 series, and three of them will be in Wales.  These are the current leader, Simone Tempetsini, the veteran Michel Fabre, and Sebastien Loeb’s protégé Terry Folb, while the Peugeot driver Fabio Andolfi stays at home.

The winner of the associated Junior World Rally Championship series, for which Wales is the final qualifying round, was decided in favour of Tempestini, but the drivers, Folb, Martin Koci and Vincent Dubert, can still finish second.

This will be the final WRC appearance for Abu Dhabi Total World Rally Team before Citroen Racing takes over the WRC programme again in 2017, and to celebrate there is a four-car entry in Britain.  No team presence is planned for Australia.

Reaction from Catalunya: the team has no available explanation for Breen’s driveshaft problem.  While the Sunday morning night stage seemed unfair as drivers did not all run in the same conditions.

Still no decision on a date for the team’s 2017 team launch, but expected to be at the end of December.  Recently announced is that former WRC driver, Mikko Hirvonen, will drive a Citroen DS3 R5 at the forthcoming Condroz Rally in Belgium. 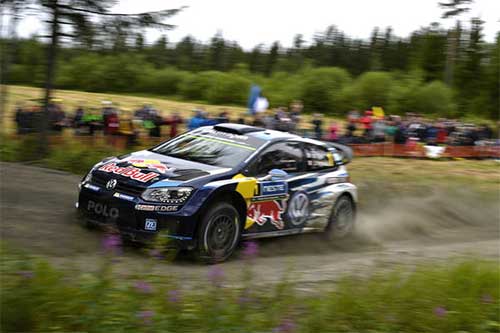 Volkswagen have won Rally GB for the past three years.Hyundai

Another three car entry with Neuville, Sordo and Paddon using the same cars as in Spain, while Abbring will compete again in an R5 car, making the debut for this new model on gravel roads.

Reactions from Spain was that the night stage provided a diversion, a nice change.  The understeering problem on the 2016 NG cars is confirmed to be an inherent problem with geometry on the car and which can only be overcome by set-up work, not experienced in Abbring’s 2015 specification car.

One day pre-event test for each driver and also one day test for Abbring.  Although both Neuville and Sordo have finished third on the event, no Hyundai driver has finished higher on Wales Rally GB.

No announcement yet about the cause of Ostberg’s new transmission trouble in Spain.  Reaction to the nighttime stage in Spain was a welcome for another challenge, while M-Sport has been active in development of directable spotlights with Lazer Lamps, which have technical advances and reduced aerodynamic effect.

Usual three cars for Ostberg, Camilli and Tanak, no pre event testing with 2016 cars.  Main curiosity is the effect of the rally’s earlier (probably warmer and drier) date on tyre wear on Saturday, when there will be 101km of stages between tyre changes.

The team’s main thrust is now on R5 activity.  The entry for Elfyn Evans was cancelled but M-Sport has entered Gus Greensmith and Rhys Yates on Michelins, while DMack has entered Marius Aasen, Osian Pryce and Sander Parn.

No team announcements for 2017 have been scheduled yet.

All three cars are the same cars as used in Corsica.  Sebastien Ogier has won Wales Rally GB for the last three years, Jari-Matti Latvala the two years previous before that and for Latvala, this will be his 15th start at this event.

Like Latvala, Andreas Mikkelsen made his WRC debut on this event, for both drivers when they were only 17!

All three drivers had a one day pre-event test in Wales.  No special lessons from Spain, only disappointment two of their drivers went off the road, but the team denied this was the result of growing pressure from Hyundai.

As for the team plans for 2017, there is no imminent news about an announcement, which should be made in early December.