Ole Christian Veiby (right) could clinch the title in Japan this weekend.

The Rally of Hokkaido is one of the longest running events in the FIA Asia Pacific Rally Championship and since it first started in 2002 the scene of many great battles, where often the championship has been decided.

Its looks to be no different in 2017 where Team MRF drivers Ole Christian Veiny and Gaurav Gill will continue their fight for the FIA driver’s championship and the APRC Rally Cup powered by Würth.

With two wins to his team-mate’s one, Norway’s Veiby starts the rally with a 10-point lead in the championship, and comes to Japan as a Rally Hokkaido novice, which may give the advantage to his Indian team-mate.

“If it turns out that Gill sets a pace that we’re having trouble keeping up with, we will do our own thing and focus on completing the event. There’s no point in taking unnecessary risks when we are in the lead of the championship” said Veiby.

Veiby had a brand new Fabia R5 last time out in Malaysia, and for this event Gill’s Skoda will sport a fresh engine.

“We’ve seen in the past that if you’re fast here first time out, you’re really good, so we expect ‘OC’ to be on the pace. “team boss Lane Heenan said.

“But having said that, Gaurav’s comeback to finish second in Malaysia was something special, and with his experience in Japan he’ll be going all out for the win to try and reduce the championship gap.

“As always, there’ll be no team orders and our drivers will be going flat out trying to beat each other.” 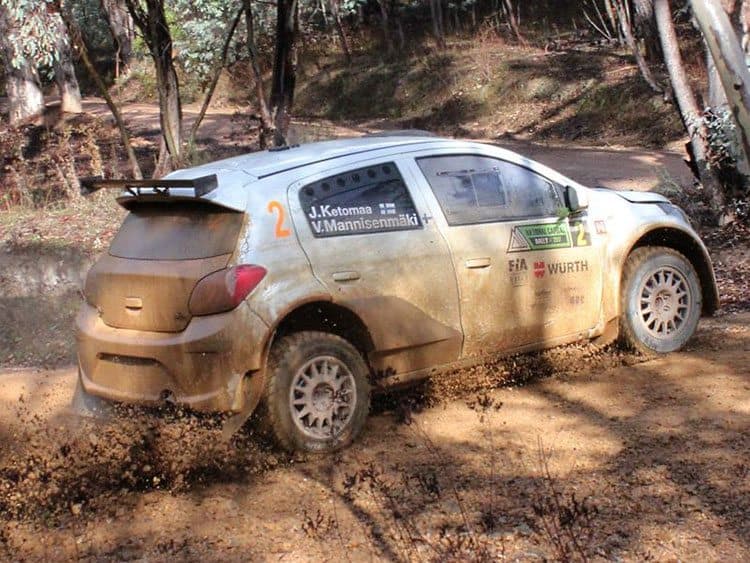 Jari Ketomaa will be pushing the Skodas hard in his Mitsubishi Mirage.

With only two rounds remaining in this year’s championship the MPart Mitsubishi’s Mirage’s of Jari Ketomaa and Robert Blomberg are still in with a slim chance of taking the title, however they would have to get maximum point this weekend and rely on both MRF Skodas having DNFs here in Japan, to have any chance of taking the fight tothe final in India.

Ketomaa has been close to both Skoda’s on several of the earlier APRC rallies, but has never been able to maintain the pace all the way through the event. Hokkaido could be different – it should suit the Finn’s flat-out driving style and he’s feeling confident.

‘We had the best test we’ve had all year. We went through our programme and, with just a few small changes to the suspension, the car feels great and I believe we have a good set-up for the rally.’

While no threat to the overall championship the MRF Skoda’s could be challenged for outright victory on this event by Japan’s Yuya Sumiyama in the Cusco Skoda R5. Last month’s Malaysian Rally was the Japanese drivers first event in the car and he was quickly on the pace, on his home event Sumiyama he may well spring a surprise.

Likely to mix it with the Skoda’s and Mitsubishi’s is Mike Young in the new Cusco Toyota Vitz, however while the car has won some short JRC events, it’s so far unproven on a demanding long distance event like Rally Hokkaido.

Nevertheless compared to the heavy Group N cars he’s been driving for the past two years its revelation for Young to be in something so compact and quick “It stops, it handles and much easier to drive than I expected”, said Young after a two day test.

Fuyuhiko Takahashi who competed in NZ and Australia in his Ahresty Subaru is the first of a large entry of Japanese drivers.

Starting at number 8 is India’s Sanjay Takale who will have his second event in his new MPart Mitsubishi Mirage, feeling much more confident in the car after a days testing earlier this week.

‘It was great to test the Mirage and I learned a lot about the car. It was so new when it arrived in Malaysia, there was no time to drive it before the rally, so I am much more prepared this time and we can build on our speed this weekend.”

Behind Takale are Japanese drivers Satoshi Imai in an Immens Motorsport Subaru Impreza, Eiichi Iwashita who was impressive last year in an Evo 9, Atsushi Masamura who finished 3rd overall in 2015 and APRC regular Tomehide Hasegawa.

Würth Japan will be busy this weekend, supplying their products and technical expertise to 24 APRC competitors.

After a short spectator stage gets Rally Hokkaido underway on Friday night, competitors face a further 10 stages on Saturday over a competitive distance of 122km. On Sunday, another seven stages complete the event, with the rally’s longest stage – the 29km New Ashoro Long – to be held twice.

The Rally of Hokkaido is one of the longest running events in the FIA Asia Pacific Rally Championship and the scene of many great battles, where the championship has often been decided. Its looks to be no different in 2017