It’s the closest season in the World Rally Championship for years, and the action gets underway again this weekend with the Italian round of the Championship. Martin Holmes previews round 7 of the WRC.


Already halfway through the season, Rally Italia Sardegna (June 9-11) is round 7 of the 13 round 2017 World Rally Championship and is in the middle of a hectic period in which four WRC events are run in nine weeks. It is the last of the particularly rough events in the series before the events traditionally become less rough gravel or are asphalt events.

It is expected to be the hottest of the rough events. The event is held entirely in the north end of the Sardinia island, based at Olbia in the north west corner but with the service park at Alghero 140km away in the north east.

Special feature is that this year there is no mid morning or mid afternoon tyre changes zones, so that on both Friday and Saturday cars must twice tackle over 70km of stages, though this year cars will not be on the stages in the full heat of the early afternoons. That is when the cars tackle the long road sections to and from service.

Hard tyres are the primes for this event, raising curiosity as to what time of day will drivers start to mix soft with hard compound tyres, so that the full limited supply of hard wearing tyres can available for use on the second runs be in the afternoons when the surfaces will be at their more abrasive. It is assumed this might be the most challenging event of the season tyre-wise faced by the new more powerful 2017 specification cars.

Once again the front running drivers will be at a severe disadvantage on the Friday morning. This affects (in reducing significance) Sebastien Ogier, Thierry Neuville and Jari-Matti Latvala while at a major advantage in Sardinia will be Elfyn Evans, Hayden Paddon and Kris Meeke.

The big news after the previous WRC round in Portugal was that Citroen Racing have substituted the driver of their third car Stephane Lefebvre for Andreas Mikkelsen, thus depleting the size of the Skoda team who had originally entered him in one of their team Fabia R5 cars. 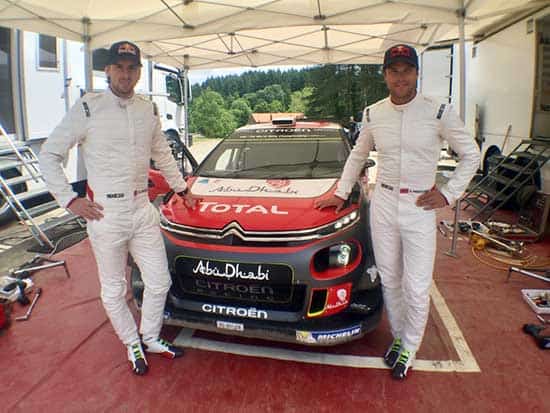 Andreas Mikkelsen will make his debut for the Citroen team in his first WRC car drive this season.This is an interesting move as it restores hopes for Mikkelsen’s continued career in World Rally Cars, which stalled when Volkswagen suddenly stopped their WRC activities. This move is a major coup for Citroen who are struggling to understand why their cars are underperforming this year.

Mikkelsen has experience in testing both the prototype 2017 Volkswagen WRC car and the 2017 Hyundai i20 Coupe WRC car. His former VW teammate Sebastien Ogier brought fresh information to M-Sport after having also tested the 2017 VW and also the prototype Toyota Yaris WRC.

55 entries have been received (45 starters last year) including 17 World Rally Cars and three WRC Trophy entries, including for the first time Yazeed Al Rajhi but none of these are for Italian drivers, as Lorenzo Bertelli is only planning two or three rallies all year.

Nine cars had been entered in the WRC2 before Mikkelsen was allowed to change to a World Rally Car. These include the Skodas of Veiby and Kopecky, who personally cannot now win the title but he can block the scoring chances for Skoda’s rivals. This event is not one of the championship’s three compulsory events.

Sardinia counts as the second round of the Junior WRC and its first gravel round, and nine of the ten drivers who competed in Corsica have again entered with three non-Fiesta drivers also competing in WRC3.

Citroen
New car for Meeke (chassis 10), Breen his Argentina car, Mikkelsen drove Sheikh Khalid’s Portugal car. The accidents for Meeke and Lefebvre were “unexpected” while Breen’s damper broke as the result of an impact with a stone on his line.

Pre-rally test was carried out in Sardinia before Portugal but Mikkelsen only first drove a C3 WRC in France on 31st May. Main major technical changes recently was work concentrating on adapting the set-up of the car.

The expected challenge of the event is the unforgiving nature of the stages, and that the rally was expected to be the hottest of the season.

Mikkelsen’s Citroen driver said to be a one-off as future opportunities are be compromised by shortage of available cars. Of the twelve previous times the WRC has been to Sardinia, Citroen has been the most successful with five victories.

Hyundai
Winning team last year with Neuville. Same three cars as used in Portugal with no specific changes in specification.

The team has no explanation for Paddon’s electrical troubles in Portugal which were only solved by changing the wiring loom, then running in Rally2 and finally withdrawing after the final stage. Pre Sardinia test was carried for all three drivers in early May before Portugal.

There was a late decision to change Paddon’s co-driver following Kennard’s election to make a premature career retirement with Sebastian Marshall now permanently alongside the New Zealand driver.

Special challenge for the team will be the effect of the high temperatures for the crews, the engines and the transmissions, and the changing driving styles as the condition of stages changes between first and second passes. 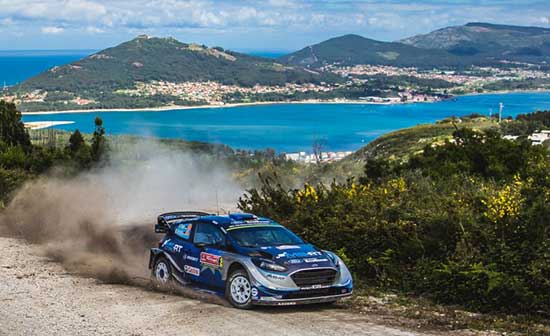 Ott Tanak is part of a strong M-Sport team that leads the Manufacturers' Championship.M-Sport
Same cars as in Portugal, two day test for Tanak and Ogier and one-day test for Evans. Portugal mechanically went well.

Special challenge here will be the heat, hotter than anything the team has encountered before, and conserving the tyres on the 72km loops. Here the stages are rather more technical than in Portugal. No fewer than eight Fiesta WRC cars have been entered. The independent OneBetJipocar team again has 2017 and 2016 specification cars.

While there are two private Italian older Fiesta WRCs and Yazeed Al Rajhi enters his first WRC event this year with his older car. Lorenzo Bertelli has confirmed he is only likely to make one more world championship appearance this year.

In R5 the team ran Loubet as a WRC2 contender and Camilli as a non-scoring driver.

Toyota
Same three cars as in Portugal. Recent development work has concentrated on finding ways to reduce the weight of the gravel specification car. Pre Sardinia test was coupled with pre-Argentine testing and was carried out before Argentina.

Previous experience from the drivers has warned the team that tyre selection and management is critical on this event, also that the softer parts of the stages can degrade very quickly, so that an ability to adjust ride heights between stages will be important.

Jari-Matti Latvala (Sardinia winner in 2009, his first all-gravel rally victory) confirmed that his illness in Portugal had been due to an attack of Salmonella in Portugal and that he has been busy getting fit again for this event, including training wearing a fireproof balaclava in a sauna …