Aussie photographer, Michael Vettas, continues his trip through Europe, and has stopped in to catch all the action of Italy's round of the World Rally Championship. Here's his report from days two and three.

Teams headed 100km east of Alghero to compete in what is arguably the longest stage in the WRC calendar, Monte Lerno.

After the morning two stages Latvala still held his lead over Ogier, however the gap was closing, now down to 17.7sec. Ostberg was a further 53.1 seconds behind as they headed in to the second passes of the morning stages. 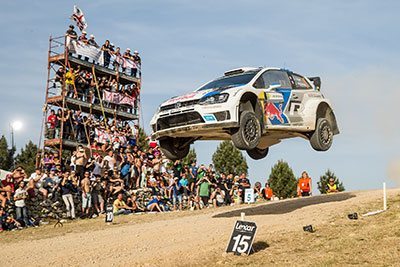 One thing about covering a WRC event is you have to have a back-up plan in case something goes astray. Something went astray: sitting on the stage waiting for cars to finish so I could move through, I was given the ‘No Pass’ hand signals. There had been quite a bit of carnage ahead, which meant the clean up crew had priority and I couldn't’t pass.

It was a shame as my next spot would have yielded some of the best pictures, but alas my back up plan was the famous ‘Mikky’s Jump’. It’s quite the jump, up hill and you cannot see over the crest, which runs downhill quite quickly. This was obviously going to be a bit of a nightmare to get to as its known for its huge spectator numbers.

I wasn't wrong. The road up the 10km hill to the media parking was crammed with parked cars, which made manoeuvring quite hard and lengthy. Nevertheless I made the jump, along with what seemed like the entire media presence for the WRC.

Most drivers slowed for the jump, the theory is less time with wheels on the ground you travel slower, so the competitive cars took it somewhat easy. However Melicharek took the jump a little too hard and his entry was probably a little too far to his left, which resulted in his landing coming within about 2 meters of spectators, who had decided to sit on the ground to get a photo.

It wasn’t the smartest move as the police (carabinieri) soon got involved and moved everyone, including the photographers, back to a safer spot, which meant I missed one car due to the crowding. I moved and got some spectacular air flying from a few of the drivers.

That was it for Heat 2, two stages repeated. After the afternoon stage completions and in particular SS13 Monte Lerno 2, Latvala had lost his lead to Ogier and had dropped a further spot to third behind Ostberg. Ogier led Ostberg by 1m40.2s, with Latvala a further 31.2s behind, and Mikkelson rounding out the top four.

Heat 3 was to be a short day with the podium at 1:30pm on the beautiful Alghero Marine. Stay tuned for the final day action. 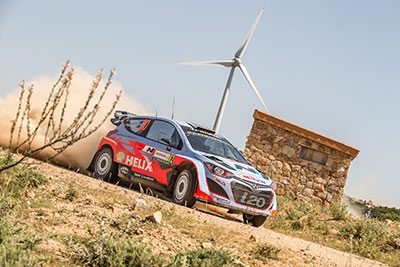 The last day of Rally d’Italia Sardegna began with Ogier leading over Ostberg by over 90sec. With only four stages on this day with two very short stages, which included the Power Stage, Ogier would have to have a major incident for his lead to be squashed.

After the first two stages Ogier’s lead had been cut by 21sec, but only two stages remained, including the short 8km Power Stage. Ostberg still held a 21sec lead over Latvala, with Mikkelsen on his heels.

Going in to the Power Stage Ogier’s lead remained the same which pretty much confirmed the victory. Latvala pushed extremely hard and came within 9sec of Ostberg, giving VW a 1,2,4 finish yet again. Andreas Mikkelsen also took his maiden Power Stage win over Latvala by just 1sec, giving him the confidence he needs going in to further rounds of the championship.

A notable mention has to go to Hayden Paddon in his maiden Hyundai i20 drive. It was great to see the New Zealander competing and I cannot wait to see him with a few more rounds of experience in the car. I think he will be a top five contender in no time.

So that's it.Rally d’Italia Sardegna is over for another year. The highlight for me would have to be the podium, set on the foreshore of the Alghero Marina with the beautiful harbour in the background with thousands of fans chanting the names of their heroes. It was a real party atmosphere and is undoubtedly one of the best podiums in the championship.

CLICK HERE to see over 230 of Michael's photos from Rally Sardinia.

With round six now complete the results for the top five are as follows: 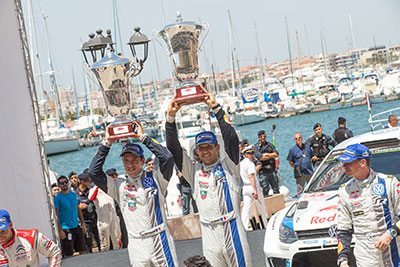 Round 7 of the championship moves to Poland. My next WRC adventure may be sooner than I think, so stay tuned for more updates. I hope everyone enjoyed the updates.