The Scandinavians had never lost the 1000 Lakes Rally (now Rally Finland), until the Spaniard, Carlos Sainz, came along. The Toyota man created history in 1990, before eventually winning his first World Rally Championship. * * * * * It took 40 years for the apparently impossible to come to pass.  For 39 years only a Scandinavian driver had won the 1000 Lakes Rally, the event which in Finland is called the Jyvaskyla Grand Prix.  For a long time it had seemed unbelievable that a non-Nordic driver could countenance winning this hallowed event.  And the Finns never gave the chances of the man from Madrid in his Toyota a second thought. However good Carlos Sainz was as a driver, it was out of the equation for him to win this time.  A foot injury from a crash during recce put an end to any chance he had of doing well and put at risk his chance to start the rally at all. 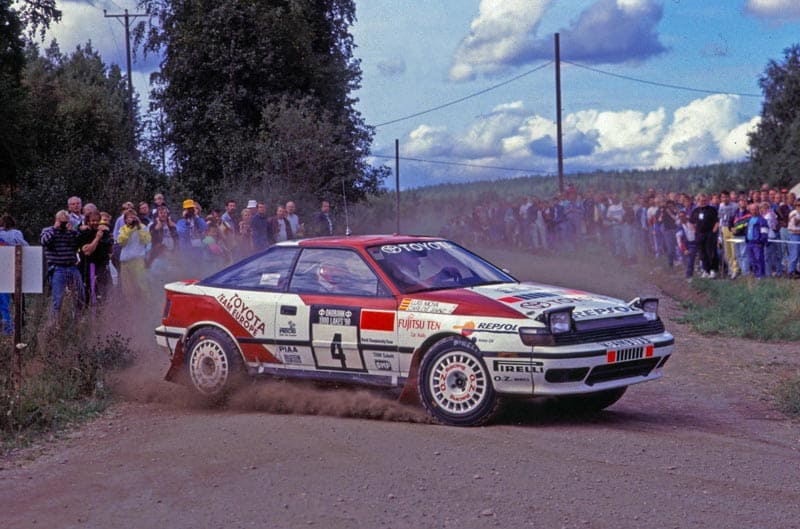 Victory happened, however, in a style which firmly established the Spaniard in the very top echelons of the sport. Until the day that recce was about to end Sainz had been on a roll, winning in Greece and then New Zealand, followed by second place in Argentina, results which elevated him in to the lead of the world drivers’ championship. He had a real chance of clinching the World Drivers’ title before the end of the season.  The pressure was mounting, but then things took a turn for the unexpected. “Unluckily we did not have much of a mid-summer holiday after Argentina,” Sainz remembers. “We spent just six days in Majorca with family and friends, but they were good days.  It certainly helped me to feel stronger for the forthcoming fight in Finland. “The problem with the 1000 Lakes Rally was that there was a lot of pressure because you must take a lot of risks if you try to win. For me the Championship battle meant that we were fighting on every rally, not just this one. “And when the roads are as slippery as they were in those days before this rally, it was very easy to make a mistake. I wanted to start the Finnish rally flat out.  In Finland you must not drive too slowly.  If you ease up you will drop down to eighth place or so! “But I would never forgive myself if we tried a little bit too hard and made a mistake.” 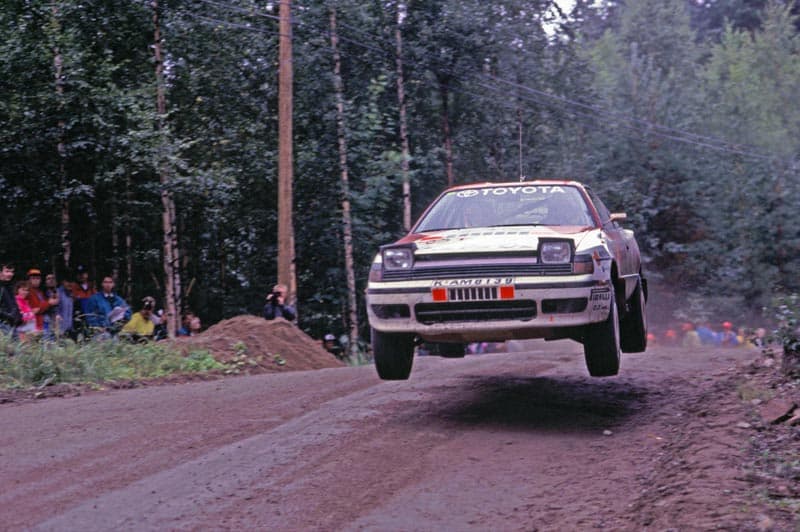 Never before had a non-Scandinavian mastered the Finnish jumps. Photo: Martin Holmes

It would have been very, very difficult in equal conditions to beat people like Juha Kankkunen and Markku Alen on this event.  Ari Vatanen had been very fast here the year before, and Timo Salonen was making incredible times with his little Mazda. “If it was going to be a slippery rally the Mazda would be a real threat.  In this rally you need a good car.  It is a rally in which power is important. “Of course, you also need to know how to drive these roads, and for the driver you must have a clear mentality and concentrate well,” Sainz says. Those were days when you did not have to enter every championship event. “So many manufacturers liked coming to Finland.  For them, it was a big chance to prove who is the best!  This situation was good for drivers, for rallying, and for the public. “In years before, the only important ingredient of success in Finland was to be a good driver.  The speeds are so high, you need to have so much control over your car.  In Finland there is no question about having to prove the strength of your car over bad roads, here there were no pot holes.” The rally, however, is special.  In some places, the pace notes cannot tell a driver everything he needs to know. “We knew that we could not use the same style of pacenotes as on other rallies.  My co-driver, Luis Moya, said the speed here was so high it was impossible to read everything. 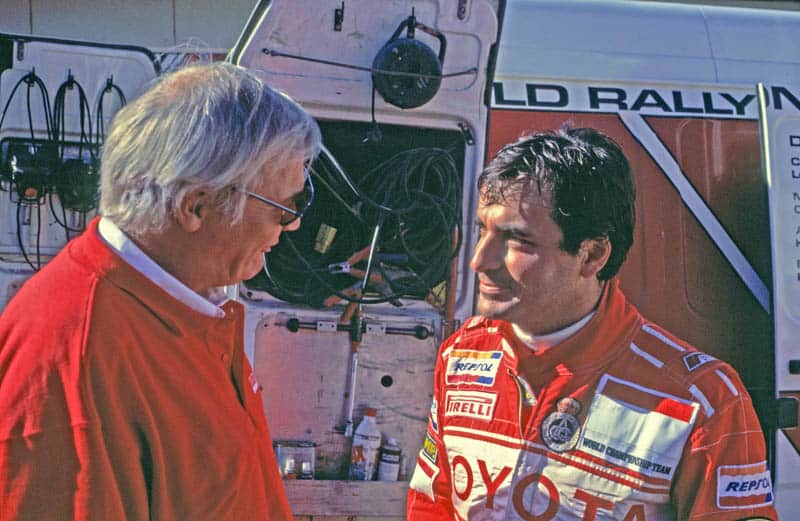 “Some of our normal instructions were just too long to read.  You had to say which side of the road you should be on, when you had to turn into the apex, which direction to go over the crests, in which part of the road to leave the corner. “Saying all these things was too much!  This was the worst rally for a co-driver to read the notes.” Carlos and Luis covered the first leg’s stages seven or eight times in recce.  For the second and third legs six times, but only four times on the fourth and final leg. “The only solution in those days was finding the time to commit the stages to memory.  The more you can personally remember, the better! “In those days the organisers only changed 20% or so of the route each year, which is why local drivers had an advantage.” The accident the night before scrutineering, however, was a big set-back. “I was driving over the second stage of the rally one last time, along a level road which suddenly falls away - we call this sort of thing a ‘dune’ - and found two cars parked in the middle of the road in the dip. “I swerved off the road and hit a bank, which tore off one suspension leg, and caught my left foot badly against the pedal.  I got out - and found the two cars had driven off! “I was so worried because I used my left foot all the time for braking on gravel, and it would be a very bad thing if I had to go back to normal right-foot braking.  Using the clutch was not a problem – anyway, when you change down you did not use the clutch. 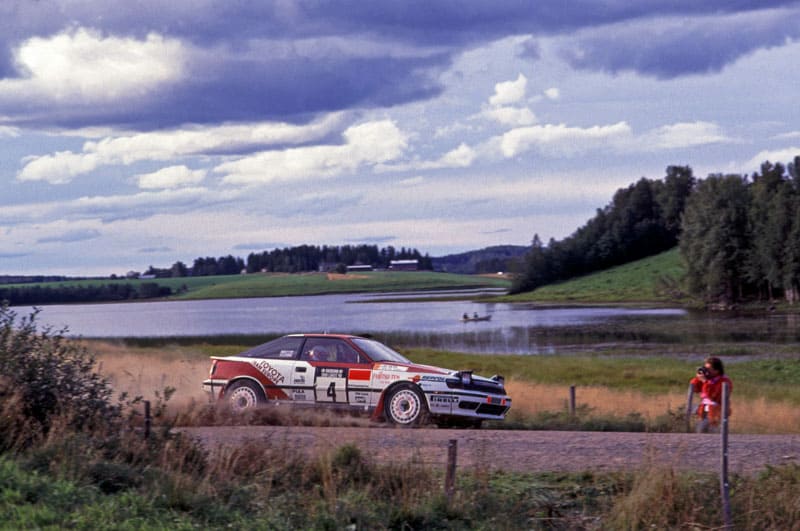 “There was nothing else to do but hope for the best.  You know, I couldn’t drive to scrutineering, the day before the rally.  I was sure I would not be able even to start the rally.” As the rally progressed, however, Sainz’s car was perfect, and the Toyota’s new 16 inch Pirelli gravel tyres worked well. “Even in initially wet conditions everything was good. The first two days were muddy and slippery, which made things even more difficult. “Luckily we didn’t make any mistakes ourselves, though several times things weren’t so nice, when we were flying when we didn’t want to fly.  The speeds on the stages are so high that the slightest mistake means you are off the road and in the trees, at 180km/h.” On the fourth stage just after Carlos had taken the lead, he had a puncture. “We were cutting the corner and hit a little stone: it was a slow puncture and the tyre only finally went flat just before the finish.  Luckily I did not lose so much time. “In this rally you have to cut some bends, but you have to know exactly how much you can cut.  You don’t cut bends when you practice, so for me it was an advantage at the beginning of the rally to have our teammate, Mikael Ericsson, with Juha Kankkunen and Ari Vatanen, all running in front of me, so I could see the lines the others were taking, see how much they were cutting the corners. “You have really to know there are no stones in these places.   Later on when I was running first car on the road I couldn’t tell where the others would cut the corners. “You would not believe how much those Finns were cutting the corners in some places!  I was also worried about getting another puncture so I was driving in the middle of the road. “With four stages to go Ari was getting too close for comfort.  We had to decide what to do.  Ari was risking a lot in order to try to catch us.  For my Championship it would be good enough to be second, but for the Constructors’ Championship a victory here in Finland was very important. 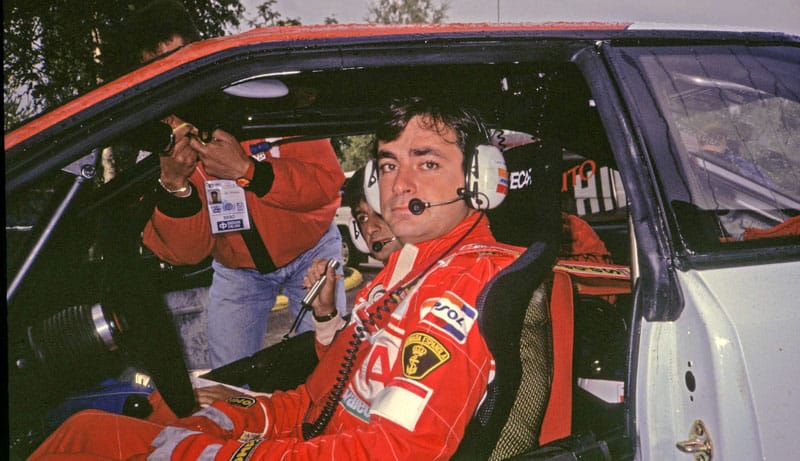 “So we decided we couldn’t ease off and would try to win!” The Ford challenge faded as the rally progressed and Mikael’s accident on the third day was a big disappointment. “To have him close behind me was a good protection against the Lancia team drivers. It was, however, becoming a disappointing rally for Lancia.  Juha was leading the rally before his throttle cable broke, but you should have seen his times when he started to catch up! “Didier Auriol had a bad rally; he went off the road on the first stage and did not have a good feeling.  Then he crashed again. “The nearest challengers then became the Mitsubishis of Ari Vatanen and Kenneth Eriksson.  Ari had a long fight with us.  We could not tell which car was better than the other, his Mitsubishi and our Toyota had similar power, though the new Subaru Legacy car of Markku Alen did not seem to be very powerful. “I am sure these weeks in Finland and our eventual victory will remain one of the best memories for me.  For years all I had wanted to do was to drive as well as the Finns. “Nobody can understand how difficult it was to win their big event.  When you achieve something after a lot of effort, the feeling is important to you.  You feel more happy.  But to win in Finland, that is special on another dimension.” 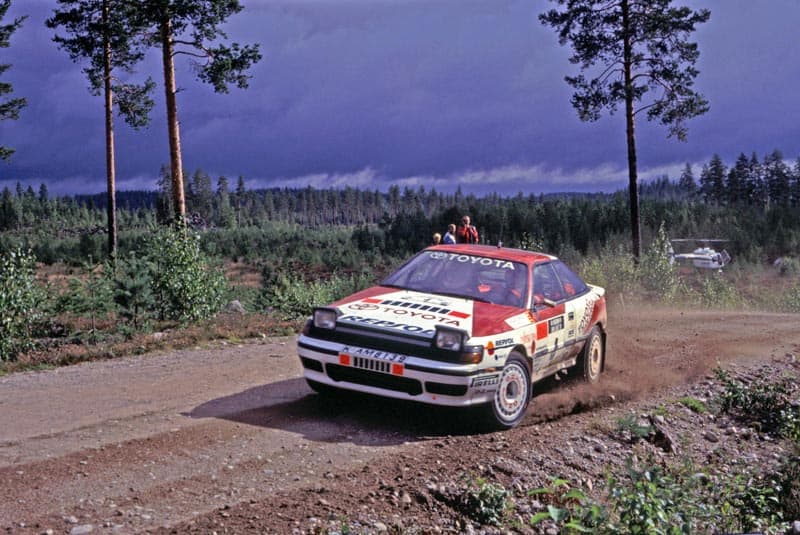 After the finish, Carlos discovered how much this rally had taken out of him. “I slept in the Rantasipi Hotel in Laajavuori nearly all the following day!  I hadn’t slept much during the rally.  The room was too hot, and each evening and morning they were massaging my foot and soaking it in ice. “Come the day of the rally, my foot injury happily wasn’t quite the problem I feared, but it was all part of the tension for me and this made sleeping difficult. “We were happy that the Finnish people did not seem to mind too much that we won! “But for our team there were more urgent decisions to make.  Now we were close to becoming World Champions.  I had the chance to become World Champion in Australia, though in fact that did not happen until we went to Sanremo one month later. “Toyota, however, did not win their title for another three years. “But the biggest shock for me came back in Spain afterwards.  Something happened to make me realise I would never be able to repeat our performance. “This was to be the final year before there was a serious clamp-down on recce speeds.  Good notes needed to be checked at high speed before the rally. “Somebody at the airport in Madrid stole Luis’ briefcase, inside were my cherished, perfected pacenotes.” 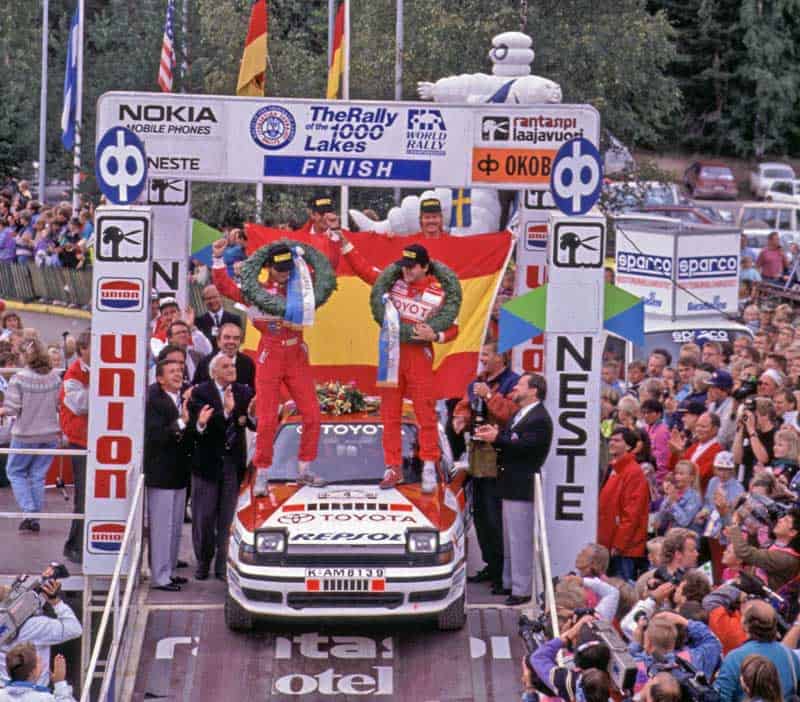