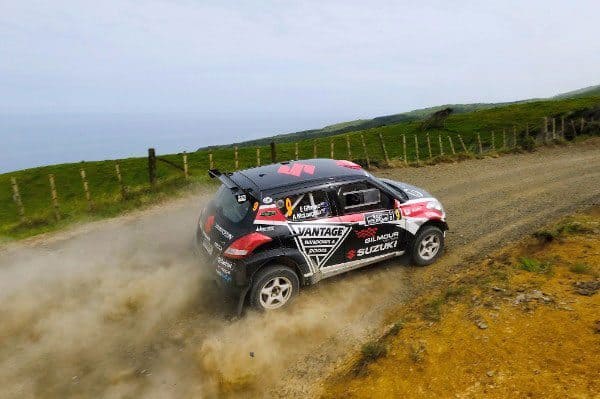 Rally New Zealand provided drivers with some incredible roads but unfortunately not the result Emma Gilmour was looking for, at this sixth and final round of the Brian Green Property Group New Zealand Rally Championship (NZRC).

The first day of the Tauranga-based event featured some of the well-known stages that were last used when New Zealand hosted the World Rally Championship in 2012. However, the hot weather heated up the gravel road surfaces to the point where they played havoc with many of the teams’ tyres – Emma’s included.

She says that although the Vantage Windows and Doors Suzuki Swift AP4 ran faultlessly, she and co-driver Anthony McLoughlin ran out of tyres.

“Too much heat and abrasive roads meant we didn’t have any clean stages without tyre problems. We had two punctures, a spin, battled through dust and struggled with canvas tyres. Nevertheless we were happy to make it to the finish and had an awesome time in the stages when it was going well. It was such a huge buzz to drive the iconic Rally New Zealand roads,” Emma says.

She finished up 10th in this first leg and was determined to move up the field in today’s second leg. Her fortunes were on the rise for five of the six stages to the south of Tauranga and she and Anthony were sitting in a credible fifth place for the event. Then things took a turn for the worse on the event’s final stage, when “the car randomly stopped,” Emma says.

After initially being unable to restart the car Emma and Anthony traced the fault back to a popped circuit breaker. They were able to fix it and complete the stage but had unfortunately lost over 10 minutes.

“It was a disappointing way to lose a fifth place after a challenging weekend and a tough season. It would have been nice to finish with a solid result as a thank you to my fantastic team and sponsors. We couldn’t do what we do without their amazing support. Congrats to Andrew and Jeff for winning the championship,” Emma says.
Related Topics