Raymo back for selected 2014 ARC events 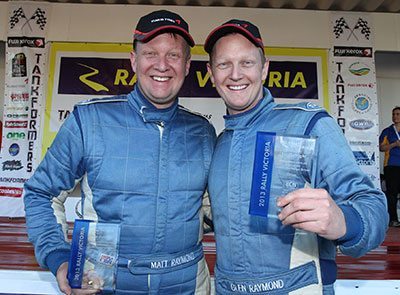 Raymond, who won Rally Victoria in 2010 at the wheel of a Mitsubishi Lancer Evo X, has been out of the driver’s seat more than he’s been in it in recent years, due to the budget constraints that many drivers face.

Interestingly, Raymond won the 2012 Victorian Rally Championship as a navigator, sitting beside his brother Stephen, but will get back behind the wheel in 2014.

Raymond, together with another brother, Matt, are currently building a new Mazda RX7 Turbo that they will contest Rally SA, Rally Victoria and, hopefully, Rally Australia in.

“We’re only doing a limited program because of a lack of budget,” Raymond told RallySport Mag.

“The RX7 will be a new car. I’m currently building up a new shell with some go-faster bits, and it will run as a PRC car with an extend ported 13B turbo motor, a dog box and MCA suspension.”

With backing from the family business, Raymond Partners Accountants, and Sky Refrigeration, the RX7 will contest the outright two-wheel drive category.

“We’re aiming for podium finishes, and also to beat some of the factory-backed cars in a 25-year old rear-wheel drive rotary,” he said.