Reeves to up the pace for next ARC round

Last week Scott Pedder threw the challenge down to Brendan Reeves, claiming that the Championship pressure was now back on the Mazda driver despite Reeves still holding the points lead.

Despite Pedder’s challenge, Reeves says he is staying upbeat, and focusing on running his own race instead of getting caught up in Scott’s comments.

“I have to say of course Scott would certainly be happy with his speed in Queensland,” Brendan said. “I was honestly quite surprised at just how committed he was, particularly on the Sunday, just how fast he was driving when he had nothing to gain.” 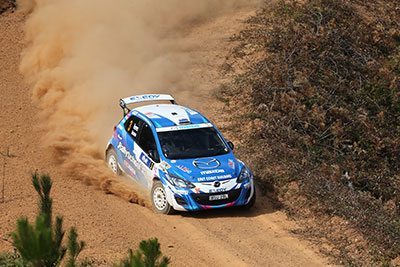 Reeves entered Queensland stating that he had a clear plan to get to the finish, at a pace he felt comfortable with regardless of Pedder’s on-stage performance. In the end Pedder won all but one of the stages contested over the weekend, including the ARMOR ALL Power Stage where Reeves crashed out.

“We drove to a good strategy in Queensland, we had a plan going into the event and I was incredibly happy that the plan worked,” said Reeves, quick to add; “But we’re going to have to drive faster in SA to hold onto the Championship lead.”

“The pace Scott showed in Queensland, I knew there was no point trying to race him, if we had chances are one of us would have come unstuck and I didn’t want that person to be me. So I was happy to get the result we did.”

Reeves remains in the East Coast Bullbars Australian Rally Championship lead with a buffer of 16 points having finished second behind Pedder in Queensland. With three Rounds to go, including the bonus points available at the Power Stage’s, Reeves admits he’s remaining quietly confident that his long-term plan is playing out just the way he wants it.

“With three Rounds left to run we’re happy to continue to be in the lead of the Championship, Scott’s still behind, but I come to rallies to win so it’s hard for me as a driver to come to an event and aim to drive a little bit slower,” he commented.

“I think it’s fair to say it’ll be race on by the time we get to that first stage in South Australia. We’ll need to sit down as a team and work out our strategy, but I think we’re so close in the Championship that we need to go out hard.”

“If we drive too slow in SA Scott will grab the lead, so we’ll need to be back on the pace,” Reeves admitted.

Consistency and reliability have played into Reeves’ hands so far this season. While Pedder has been fast in all three Rounds, he has faltered on two of those occasions and has benefitted greatly from the restart rules, a fact that Pedder openly acknowledges.
“The cars done a great job, and there is absolutely nothing we’ll change on the car before we get to SA. It was reliable and that’s the most important thing in rallying, and that reliability is something we’ll continue to work on.”

“We have three events to go, including Rally Australia which was a long, tough event last year. If we can continue to be reliable then I honestly think the challenge is there for Scott to not only be very fast but to be reliable too,” Brendan said.