Tanak led from the first stage on Saturday to the end, ending 53.7 seconds ahead of a fiercely fought battle for second place.

Esapekka Lappi’s Citroen finished second in front of the Hyundais of Neuville and Andreas Mikkelsen.

Tanak saw off determined challenges by favoured drivers Sebastien Ogier, Teemu Suninen and Jari-Matti Latvala who all lost time in snowbanks or off the road. 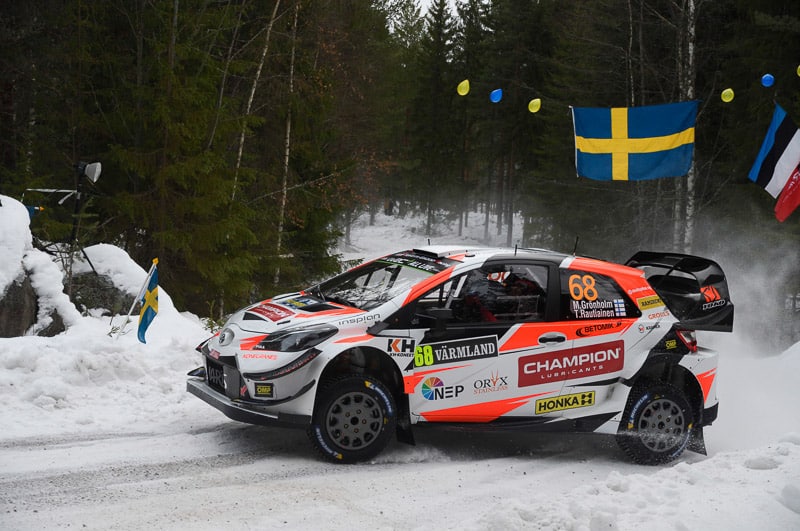 This event was a popular final comeback for former champion, Marcus Gronholm, but his efforts were frustrated by off road misdemeanours.

Behind the World Rally Cars there was more tight competition, with Mads Ostberg’s Citroen winning the WRC2 Pro, and Ole Christian Veiby’s Volkswagen the Amateur categories, while Tom Kristensson won the opening round of this year’s Junior WRC. Veiby’s closest rival was Jari Huttunen who crashed on the penultimate stage, letting Emil Lindholm come second. 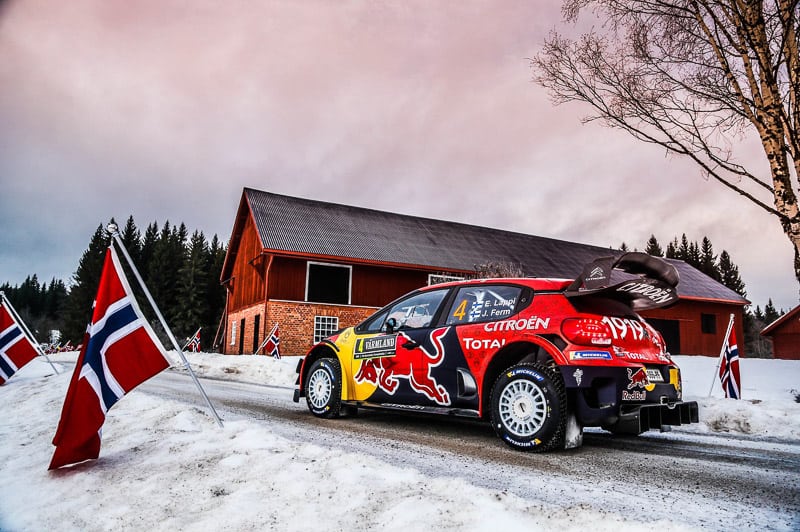 After all the pre-event debate on the anticipated conditions on the WRC’s only fully winter event, it turned out to be quite a mixture with ice rather than snow the most common factor. Happily there was a good base of frozen ground so that despite two days being run in substantially plus degree temperatures, melted ice did not dominate on the tracks. Several stages were run in what drivers described as perfect conditions, with limited amounts of snowbanks though enough to punish the slightest driving errors.

Conditions generally favoured later running cars, confirming pre event worries of the championship leaders Sebastien Ogier and Thierry Neuville. What was not expected was the long list of costly errors from all the fancied drivers except for Tanak who by Saturday morning was suddenly a half minute ahead of the opposition and gaining. 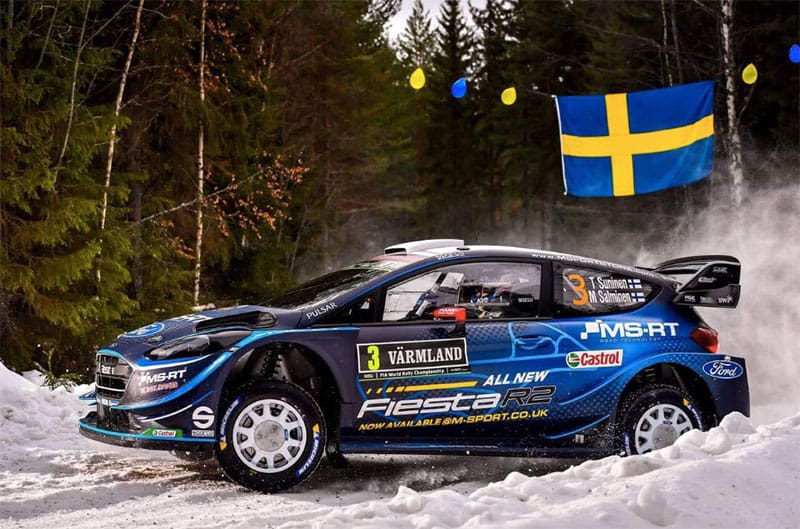 Citroen went to Sweden full of confidence following their 100th WRC victory gained at Monte Carlo Rally, but Ogier’s hopes were dashed when he went off the road on Friday afternoon. Tanak took an early lead but fell back when his tyres were overheating, hampering the effectiveness of his studs. This then opened up a gap between Jari-Matti Latvala (on his record breaking 197th WRC entry) who took over the lead, but he backed off and eased his pace, and Teemu Suninen took the lead which he held for the rest of that day.

Latvala was holding second but then drove into a snowbank on the final stage of the day. He selected the least damaging penalty for the circumstances and entered into the list of restart crews. On the first stage on the Saturday, Tanak eased past Suninen and took the lead which he held for the rest of the event. On a later stage, Suninen went off the road sideways into a tree - not a major impact, but enough to damage the rollcage which M-Sport repaired so he could restart on the Sunday. Tanak was now well ahead, but behind him there was a fierce battle for second place. 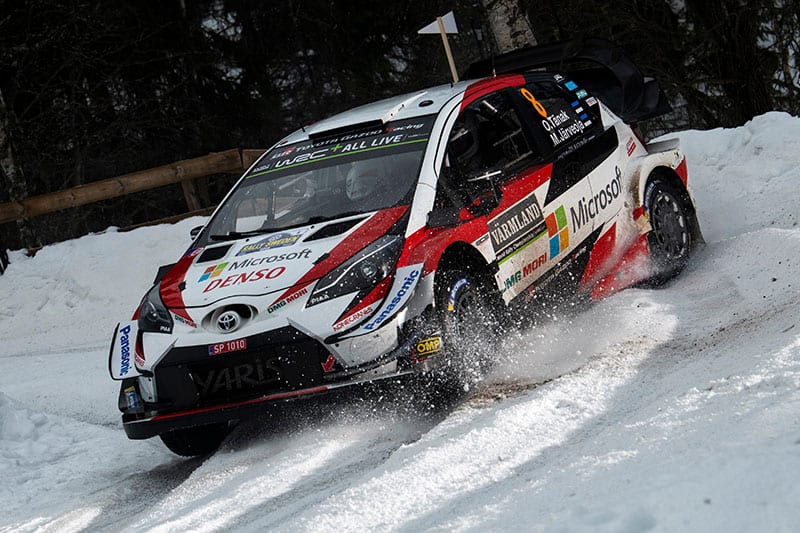 From midday Saturday, Lappi, started gaining ground and by the end of the day, he was equal second with Mikkelsen only 2.3 seconds behind in fourth place. An exciting finale was in store but in fact the gaps behind Tanak widened. Lappi was now established in second place but more by luck than judgement. On the Friday, he had rolled into a snowbank but the snow then threw the car back on to its wheels as if nothing had happened.

Perhaps one of the main fan attractions of the event was a career final appearance for 51 year old, Marcus Gronholm, in a Yaris WRC provided by TGR chief, Tommi Makinen. Gronholm started off nervously, missing five stages on the Friday. He carried on bravely even though running order rules forced him to run at the head of the rally. One of his old rivals was Sebastien Loeb but like Neuville and Mikkelsen, he found the Hyundai i20 WRC was hard to drive in the conditions. Janne Tuohino finished tenth on his first rally in a World Rally Car for 11 years, driving his private Fiesta WRC. 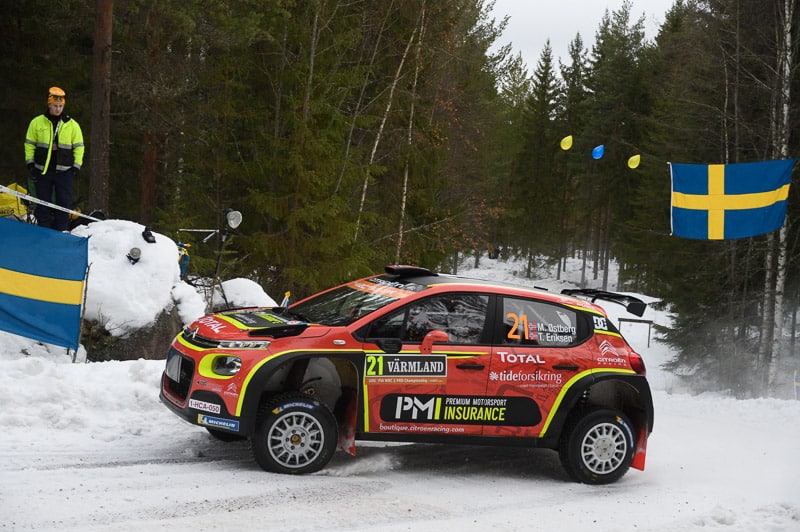 Mads Ostberg in action in the Citroen C3 R5 - his first WRC event in the car. Photo: Martin Holmes Rallying

At the end of the rally, the fastest cars were the Toyotas with Tanak winning six stages and Latvala two (none by Meeke), while M-Sport scored five, three for Evans and two for Suninen. Citroen scored three (all Ogier), Neuville scored two for Hyundai and on the treacherously icy long Torsby stage on Friday evening, fastest was Jari Huttunen in his Skoda R5. Certainly M-Sport were very heartened by the speed of Suninen while Evans went well when circumstances were good for him to finish fifth and Pontus Tidemand had an importantly steady points-scoring run.

The new double category for R5 cars produced an impressive result for Volkswagen Polo GTIs which finished 1-2-3 in the WRC2 amateur division, after a penultimate stage crash for Huttunen when he was chasing class winner, Veiby. Veiby was the highest placed R5 car on the event. 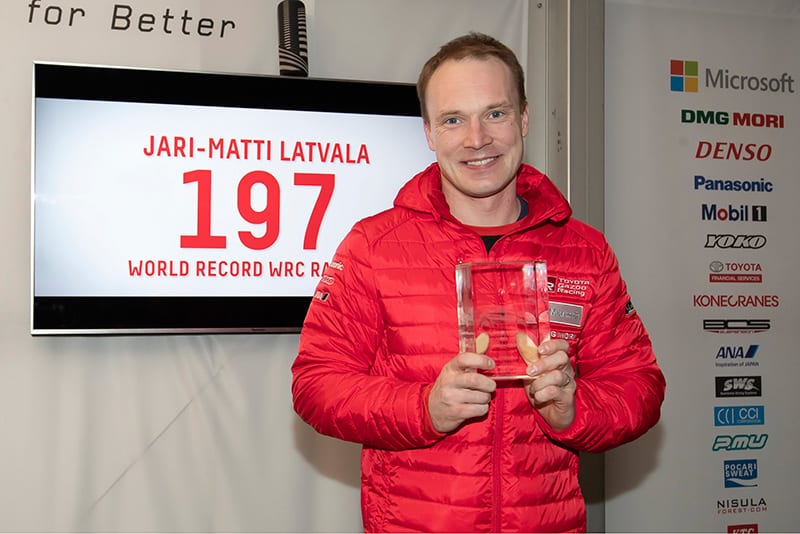 Second was Mads Ostberg’s Citroen C3 R5 which he found difficult to drive although he gained maximum WRC2 Pro points. This division saw only five entries, Ostberg being the only one from Citroen. Skoda entered Kalle Rovanpera (in a snowbank on the Friday, finished second) and Eerik Pietarinen (rolled on the Friday and crashed finally on the Sunday) while M-Sport entered Gus Greensmith (3rd) and Lucasz Pieniazek (4th).

In the opening round of the Junior WRC the battle was between two Swedish drivers, Dennis Radstrom and Tom Kristensson. Kristensson took over the lead when Radstrom went off the road on Saturday afternoon. There are five events in this year’s JWRC, the next being the Tour de Corse in late March.