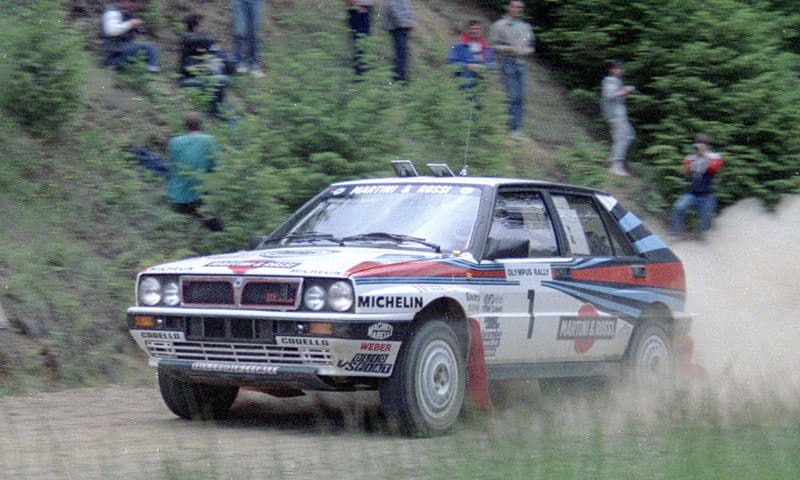 Most rally enthusiasts are hoarders at heart, rarely disposing of rally memorabilia that one day will be looked back on with the fondest of memories, and which might even be worth something to the budding collector one day.

Autographed caps, shirts and jackets are often proudly mounted under glass and being sent ‘straight to the pool room’ to accompany rally stories that become taller in direct proportion to the number of beers consumed!

For me, a long time family friend had spent many years living and working in America before coming to Australia with a container load of furniture and motor sport bits and pieces. 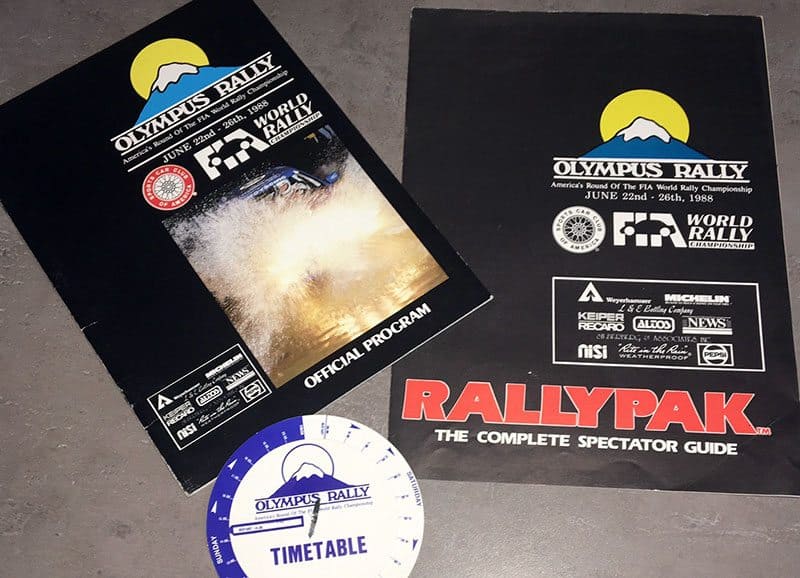 After sorting through the gear, I was lucky enough to be the recipient of a Spectator Pack from the 1988 Olympus Rally in North America, a round of the World Rally Championship that year.

Now, 30 years on, I recently unearthed the documents from my collection and while still in good shape, it was time to share it with readers who may remember some of the great rallying of the 80s.

By comparison to high-profile Australian championship rallies of today, the Pack rates well, including a well-laid out spectator guide with very good maps and road instructions to follow the event route around Tacoma, Washington state – some 180 kilometres south of the USA/Canada border.

In addition to the guide and program, a t-shirt was included, along with a 2.5 cm Michelin Man/Bibendum key-chain from Michelin Tyres, one of the event sponsors.

Based around a relatively small population base, it is remarkable in hindsight that this part of the country won the right to host a WRC event, given the fact that rallying in its purest form was clearly not as popular in the US as it was in Europe. 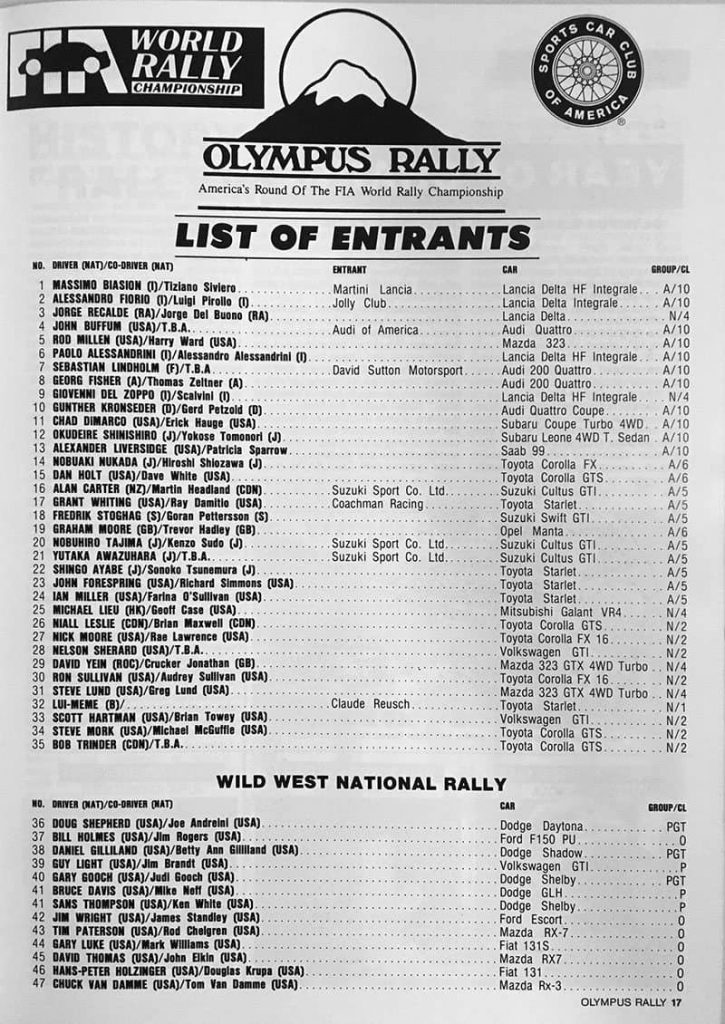 However, rallying as a sport was strong in the north-west and despite being away from a major centre, this was probably the only location where the event could have been run, despite the logistics of getting there.

But it seems that thanks to a very enthusiastic organising committee, the event was observed by the FIA in 1985, before being granted WRC status for three years from 1986 to the final event in 1988.
It had been a national rally for 22 years before pursuing the FIA’s blessing to seek inclusion into the WRC.

Importantly, the 1986 Olympus Rally included Group B cars in their last year of competition, and Markku Alen took the win that year in his fire-breathing Lancia Delta S4.

Winning the 1985 event was Hannu Mikkola in a Group B Quattro Sport S1, and Juha Kankkunen in 1987 (Lancia Delta HF), so the event featured a strong history of success by some of the best ever Group B drivers. 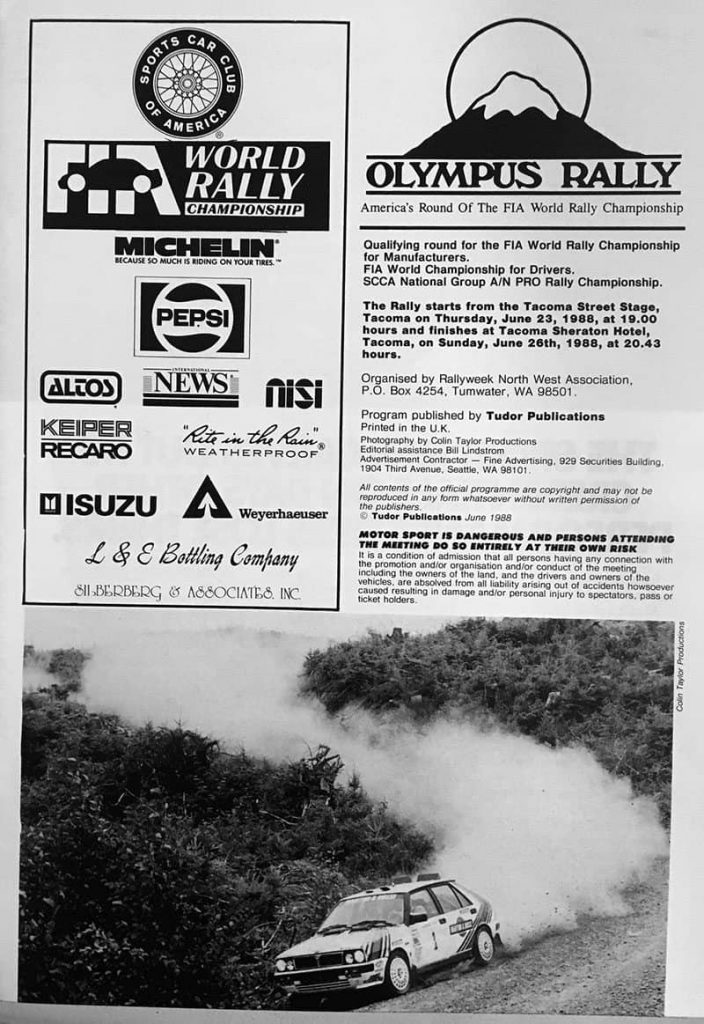 1988 was the era of factory Group A teams, and the entry list featured the factory Lancia Delta of Miki Biasion/Tiziano Siviero at car 1, with Alex Fiorio in a Jolly Club Lancia at 2, and a Group N version for Jorge Recalde starting at 3.

One of the best ever American drivers, John Buffum – an 11 time national champion – was in an Audi Quattro entered by Audi of America, and ex-pat Kiwi Rod Millen was listed as a USA entry at 5 in his Mazda 323.

While the WRC field consisted of 35 entries, like many other events the rally was supported by a ‘local’ event, aptly titled the ‘Wild West National Rally’, adding a further 12 local category cars and teams from the USA.

This was a round of the SCCA National Group A/N PRO Rally Championship. 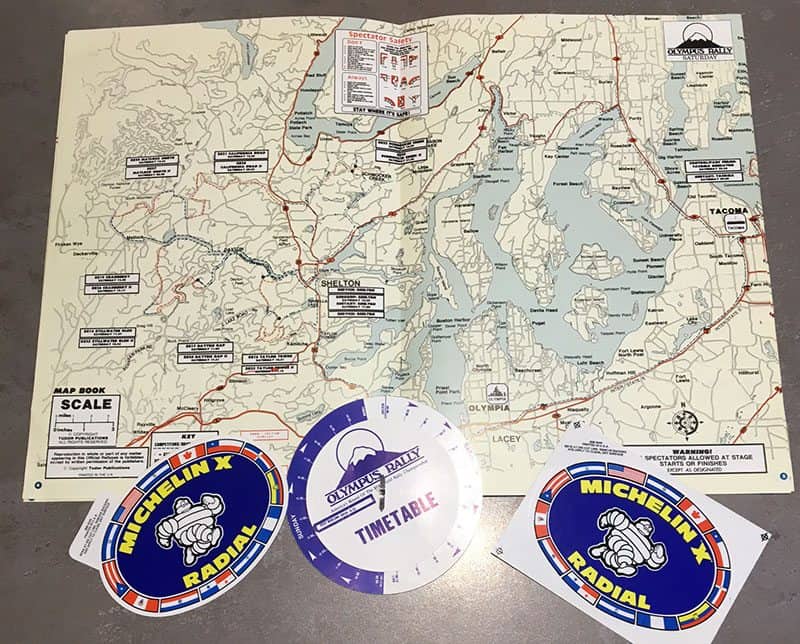 John Nagel was the event chairman with Ron Barker the Clerk of the Course, and the team presented an astonishing 38 special stages over the three (very) full days of rallying.

A fairly traditional Thursday evening street stage of 1.20 miles (2km) was run twice over roads near the Tacoma waterfront.

The program reported that only 90 days before the rally a major land owner of about 75% of the rally’s stage miles withdrew permission to use the roads, due to drought conditions, and a major re-route was completed in record time. 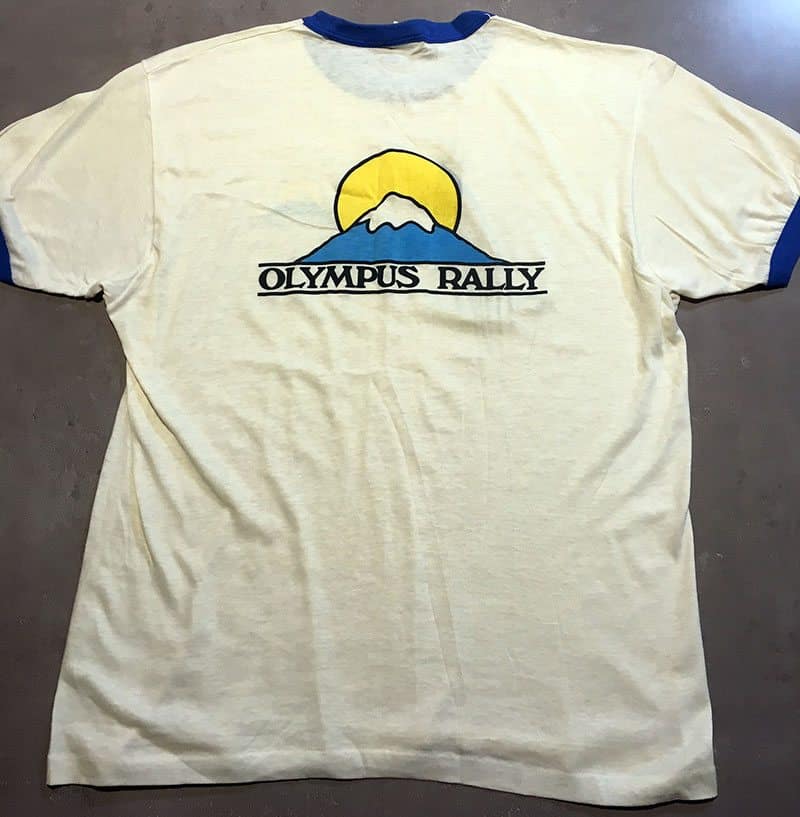 John Nagel’s team nevertheless managed to pull off a miracle and delivered a compact WRC event, which was reported at the time as being “….poorly supported by international entries, let down by sponsors and landowners, and faced by an indifferent public, but the organisers produced a most respectable rally…”.

In the awards, the event offered the Henry Liddon Trophy, in honour of the great Henry Liddon, an Englishman who was manager of the European Toyota Team and sadly killed in a plane crash while covering the Safari Rally in 1985.

The event name and John Nagel’s name lives on in 2018 with the John Nagel Rally Stages – covering 113 competitive kilometres of day one of the Olympus Rally, which was run in May 2018 near Shelton, Washington.

Winning in 2018 was the Subaru STI of Matt Dickinson and Daniel Picker.