Hobart driver Matt Rickards has achieved the biggest win of his career, claiming the 2014 Targa Wrest Point title after overnight leader, Steve Glenney, dropped out of contention with a broken gearbox.

Driving a 2005 Mitsubishi Lancer Evo 9, Rickards and co-driver, Michael Potter, eventually finished the third round of the CAMS Australian Targa Championship a commanding 52 seconds ahead of Glenney.

Port Macquarie car dealer, Andrew Miedecke, was the class of the field, taking out the Classic Outright competition in his 1970 Ford Capri Perana, while Launceston’s Ben Newman had to fight all the way to the finish to claim the Showroom 4WD class in his Subaru WRX.

Glenney, a South Australian now based in Hobart, started the first day with a five second lead over Rickards, but knowing the day’s tight and bumpy stages may well suit his rival’s Mitsubishi more than his own Nissan.

Things looked on track for Glenney after he won the first stage of the day, but as Rickards upped his pace, the big Nissan faltered, breaking fourth gear and eventually limping to the finish in second place.

An electrician by trade, Rickards’ win was well deserved. Driving the same car, he won the Early Modern class in 2012 and 2013, and has since improved the performance of the car to run in the Modern competition. It was a decision that has paid dividends.

“We’ve had two Early Modern wins here over the last couple of years, so to win the Modern category now is fantastic,” Rickards said.

“We’ve had a great event with some great stages, including Esperance Coast on day one, which is probably my favourite for the whole event.

“To get to the finish after having mechanical problems on the last two events, it’s just a fantastic feeling. It was a shame that Steve (Glenney) lost fourth gear today, because it would have been good to see how it all finished up, but that’s motorsport.

“We’ll now pull the car apart, go through everything and hopefully line up for Targa Tasmania in May.”

Targa veteran and former Targa Tasmania champion, Tony Quinn, took his Nissan GT-R to third place, ahead of Burnie’s Jamie Vandenberg (Lancer Evo 9) and Hobart’s David Ayers (Nissan GT-R). Vandenberg’s fourth place now puts him in the lead of the championship, with one round remaining.

The Classic Outright competition was dominated by Andrew Miedecke in his Ford Capri Perana. South Australian, Craig Haysman, set the early pace on day one, but Miedecke soon overhauled the Triumph TR7 V8 and was never headed. 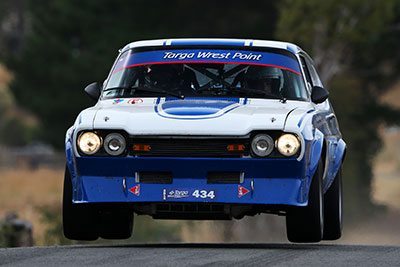 Greg Garwood finished in third place in his thundering 1977 Holden Torana A9X, much to the delight of the car’s many fans.

“It’s great to win. I won Targa High Country a couple of times, but I’ve never made it to the end of a Wrest Point before,” Miedecke said.

“The car is in great condition and it was brilliantly reliable throughout the event, so I think it will be good for me to come home to Tasmania for Targa Tasmania in May - and to see my friends and relations.”

In the Showroom 4WD competition, a gripping battle took place over both days. Initially it was a three-way fight, but when Angus Kennard retired his Subaru mid-way through the second day, it was left to Launceston’s Ben Newman, and West Australian, Stewart Liddle, to battle it out.

Newman led going into the day’s first stage in his Subaru, but Liddle was immediately on the attack in his Mitsubishi, moving into the lead by the third stage.

But drama struck Liddle on the final stage and the West Australian dropped 45 seconds when his power steering failed, and he fell to second place.

“Hats off to Stewy for keeping the pressure on all weekend, and I thought he was going to get us today - he was having a red hot crack,” Newman said.

“But our car went perfectly and it’s great to win.

“Bring on Targa Tasmania now. We’re happy to have consolidated the lead in the championship, so we’re pretty excited about the next event.”

Renault team-mates, Adam Spence and Andrew Bollom, finished first and second in the Showroom category, with Spence consolidating his lead in the CAMS Australian Targa Championship.

Glynn Crimp (Showroom Sports) was the only finisher in Showroom Sports, while the Modern Muscle Car class saw Craig Dean finish more than three minutes clear of the field in his Ford Mustang Shelby GT500.

In Early Modern, Scott Strong (Mitsubishi) finished a minute clear of Pete Nunn’s Porsche, after the BMW of Brett Morse rolled out of the event on stage 11.

The Regularity class was taken out by the Ford Escort Mk1 Mexico of Gerry Bashford, with 1970 Australian Rally Champion, Bob Watson, in the navigator’s seat.

The final round of the CAMS Australian Targa Championship is Targa Tasmania, starting on May 6.