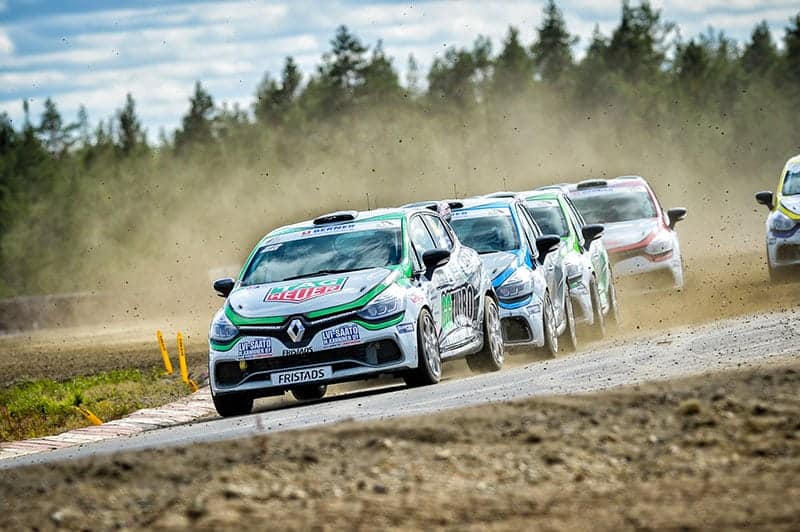 The battle to become the second ever RX Academy Champion and claim one of the biggest prizes in rallycross is set to intensify in the penultimate round of the season at Kouvola in Finland (August 26).

Racing as part of the Kouvola Rallycross Festival, RX Academy joins RallyX Nordic this weekend for the second of three events this season. The last time RX Academy joined the Nordic series was for round one in May, at the World-famous Holjes circuit in Sweden, where Jimi Kalliomäki (#95) claimed victory on his RX Academy debut, and his first time racing the factory-built Renault Clio RS RX in summer rallycross conditions. Kalliomäki is third in the points.

New Zealander Sloan Cox (#21) also finished on the round one podium but hasn’t made the final in the most recent two rounds at Honkajoki and Jalasjarvi. He will be hoping to fight back this weekend, while Estonian driver Marko Muru (#27) has been on somewhat of a roll in recent races and has bagged a pair of podium finishes to hold fourth in the standings.

Swedish driver Isak Reiersen (#70) produced an impressive performance in round three at Jalasjarvi two weeks ago by setting a fastest qualifying time and finished fifth in the final. He is targeting a maiden podium this weekend, while Russian Marat Knyazev (#96) returns to RX Academy having been forced to miss round three.

RX Academy also welcomes a new driver this weekend. Finnish kart racer Juho Valtanen (#8) has more than 60 kart race victories to his name and is a five-time Finnish Champion. He finished third in the CIK FIA World Karting Championships last season and makes his rallycross debut this weekend.

However, regular RX Academy driver Troy Dowel (#87), from Australia, unfortunately won’t compete at Kouvola. Following round three at Jalasjarvi a fortnight ago, Troy was taken seriously ill while travelling in Ireland. Since Troy joined RX Academy at the start of 2017 he has worked hard and grown into a fast driver with an endearing and fun-loving personality. Everybody at RX Academy wishes Troy a speedy recovery.

“It doesn’t feel like long ago at all that we were at Holjes with RallyX Nordic for round one, and we’re looking forward to joining both the Nordic and the Finnish Rallycross Championship this weekend at Kouvola, one of the best rallycross circuits in the world,” said Jussi Pinomäki, Head of RX Academy.

“The competition has been really close all season, Sami-Matti has the lead at the moment but that could quickly change this weekend, like it has at every event so far this year. The weekend will begin with physical and mental coaching, media training and driver tuition as we work with these young drivers to give them the best platform to grow their rallycross careers.

“But, while we get set for another round, our thoughts are also with Troy (Dowel), who will be much missed this weekend. Troy has worked hard in RX Academy to develop his skills and he a very well-liked member of the paddock. We wish him all the best for a fast recovery.”