Hayden Paddon and co-driver Sebastian Marshall experienced the highs of leading Rally Italia Sardegna for eight of the rally’s 19 special stages, and the lows of crashing – twice – to end their hopes of a strong finish.


The Kiwi-Brit pair headed to the seventh round of the FIA World Rally Championship seeking to find the passion and enjoyment of competing at the highest level of world rallying.

Fifth equal in Thursday night’s super special stage in Alghero, Paddon and Marshall enjoyed a very consistent day of top three and top five stage times on Friday to take the lead in special stage five – so the pre-event plan seemed to be working well.

Despite a small suspension issue later in the day, the pair managed to slightly extend their leading margin to 8.2 seconds over Hyundai Motorsport team-mate Thierry Neuville.

“I’m really happy to be leading at the end of the day,” said Paddon as Friday’s eight stages concluded.

“It’s been a tough day. Today’s stages were very tight and technical and maybe didn’t suit us, but we had a plan which was to keep it clean and tidy today. Too often this year we’ve been caught out on the Friday, so today was a nice, clean day with no risks.

“To be leading is a nice surprise. We had a couple of issues that we had to manage this afternoon with a small suspension problem, but we didn’t lose too much time and we were able to keep the lead. That’s important for Saturday as that now gives us a good road position to be at the back of the field, so that will help us. Now that we’re in this position, we want to fight.

“Tomorrow’s stages I enjoy a lot more and we’ll push a lot more as well and see if we can defend it. Looking forward to a good day tomorrow and to continue like this.” 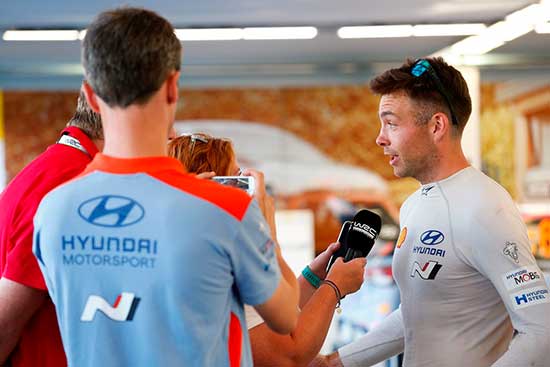 Starting Saturday with the road-clearing benefit of running last among the WRC competitors (the running order being the reverse of the rally classification), Paddon and Marshall scored their first stage win of the weekend in SS10 as they set about extending their advantage.

The pair set the second-quickest times on the next two stages to create a 9.4-second gap to Ott Tanak in second place by lunchtime service, and things were looking good as they began the afternoon loop. However, they clipped a bank before the first split in SS13, which caused damage to the #4 Hyundai i20 Coupe WRC. Despite completing the stage with a time loss of 1m20s, Paddon was unable to continue and was forced to temporarily withdraw.

Of Saturday’s incident, Paddon said: “I am devastated. It was such a schoolboy error, which caused us to break the rear wheel. I turned in too early and clipped a bank. That was that. There is no one to blame but myself, and I am hugely sorry for the team and all of our supporters.

“It’s important that I learn from this and do all I can to put things right at the next event. Things were going so well and we were maintaining our lead, which makes it even more frustrating.”

They re-joined under Rally 2 regulations on Sunday, which means they received assigned times for the remaining two Saturday stages putting them in 12th place overall on the rally classification prior to Sunday’s final four stages. Sunday’s running order put Paddon and Marshall 10th on the road after the other WRC competitors.

Paddon and Marshall looked on course to finish in style, taking a stage win on Sunday’s opening stage, and were seventh in the next stage.

Unfortunately, in SS18, they crashed again in an incident similar to the one that forced them to retire on Saturday, putting them out of the rally. A WRC TV crew reported that Paddon went off on a right hander. The car went onto two wheels and crashed heavily into a dry stone wall.

Both Paddon and Marshall were physically unharmed, but the special stage was stopped for following competitors.

Paddon said: “After Saturday’s misfortune, we wanted to use today to get back into a rhythm. Things started out well with a stage win, but that was the extent of our positives from today.

“In the penultimate stage, we had another very strange incident on a ‘nothing’ corner, where like yesterday I clipped the inside, which sent us wide. I don’t know why this is happening.

“I am incredibly disappointed in myself and for the team. I want to learn from this but at the same time put it behind us and look ahead to Poland.”

For the team, Hyundai Motorsport extended its run of consecutive podium finishes in the 2017 FIA World Rally Championship with Thierry Neuville and Nicolas Gilsoul securing a hard-fought third place finish. Dani Sordo and Marc Marti also won a number of stages in this rally, but a turbo issue on Friday left the pair 12th at the finish and ruing what might have been.

Team Principal Michel Nandan said: “We have to reflect on this rally with the realistic fact that we have lost ground to M-Sport in the Manufacturers’ Championship. Our congratulations to them, and to Ott Tanak for his debut WRC win. We just had too many issues this weekend, and missed the chance to assert our authority on the event, as we should have.

“All crews showed their potential with eight stage wins in total but it wasn’t to be. Of course, it’s frustrating but we have to learn from this and regroup for the next event in Poland. A podium is still a decent result and Thierry has closed the gap to Ogier by a few points in the Drivers’ Championship. The team has worked hard this weekend, so we will gladly take the consolatory podium, all things considered.”

Paddon and Marshall return to WRC competition with the 29 June-2 July running of Rally Poland, where Paddon will be keen to secure a solid result.