Second for Paddon and Marshall in Poland to make Hyundai 1-2!


After only three events together as a new crew, Paddon and Marshall celebrate their first-ever podium finish. This result is Paddon’s first World Rally Championship podium result since Poland last year where he finished third with John Kennard as co-driver, and his best result since his win in Argentina in 2016.

“Very happy,” said Paddon after Sunday’s (CEST) four final stages. “To finish on the podium is more than we expected, especially after the rally started on Friday morning when we found ourselves 40 seconds back.

“Since then the rally’s gone very well. We stayed out of trouble and then today was about consolidating. We had a big gap in front and behind, and we just wanted to bring home a podium result. Unfortunate for Ott [Tanak] who had a small crash, which meant we were able to pick up second and one-two for the team.” 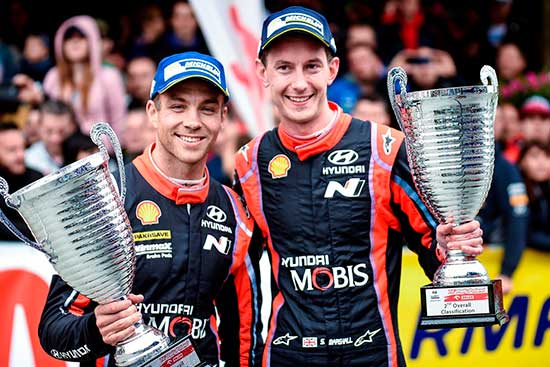 The Kiwi-Brit duo came through extremely slippery conditions on Friday’s opening leg to hold fifth place, about 40 seconds down on the leader, Neuville. Saturday’s drier conditions saw Paddon and Marshall improve to fourth – setting three stage wins throughout the day – while the rally leader changed several times during an intense battle. With Jari-Matti Latvala out, Paddon moved into third place by the close of Saturday.

Paddon and Marshall approached Sunday’s short leg conservatively, seeking to consolidate their position in third. But with the unfortunate demise of Ott Tanak who crashed out of a battle for the lead with Neuville, Paddon was very happy to take second place.

“But you know for us, it’s a massive relief. The biggest thing of this [result] is it’s been 12 months since we were last on the podium and this year’s been some of the hardest times of my life. It’s been very difficult and this weekend has helped me lower the shoulders and relax a little bit. [This] gives us a bit of momentum now that we can build on to work towards future rallies. So really, really happy with this result.

“Huge thanks to the team. They’ve been very patient with us, obviously things haven’t been going well, but they stuck at it and never gave it. We’ve had the full support of everybody.

“Now we’re really looking forward to Finland – my favourite rally of the year. We know we have a car that’s working even better in Finland than it was here, so looking forward to that and now a couple of weeks to reset and prepare as best we can.”

Team principal Michel Nandan commented: “This is a really important result for us as a team, especially in terms of our championship objectives. More than that, though, it shows what we can achieve as a team when we are all on top of our game. Everyone has performed fantastically this weekend, and this 1-2 result is for all of our employees in Alzenau. Congratulations to Thierry and Nicolas on their third victory of the season, and to Hayden and Seb for their first podium as a crew.

“With Dani and Marc also not far off in fourth, we have had a good weekend. Of course, we were sorry to see Ott retire from the rally today, after what had been an epic battle. WRC is in great health with such a high level of competition, and we are honoured to be playing our part.”

The result moves Paddon into seventh in the WRC drivers’ championship standings.

The next round, the ninth of the 2017 FIA World Rally Championship, is Rally Finland, famed for its high-speed, high adrenaline stages. Rally Finland takes place from 27-30 July and is a rally where Hyundai Motorsport has yet to claim a podium finish.