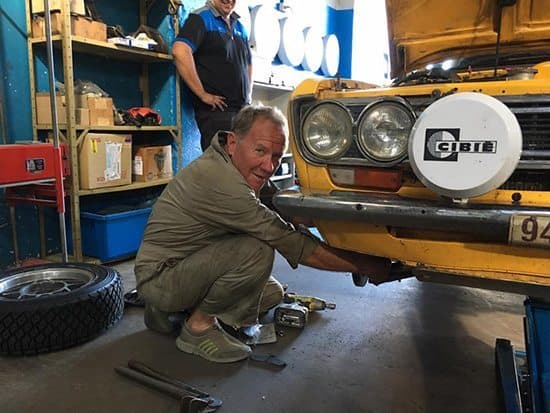 Ross Dunkerton working on his Datsun 1600 during the Southern Cross Rally.

For those of you who thought about entering the Southern Cross Gold Anniversary Rally (SCGAR) and didn’t, you’ll be kicking yourselves as the stories unfold from competitors over the next few weeks and months.  Ross Dunkerton reports.

“Once again, the ever-energetic Graham Wallis, ably assisted by Bob Watson and a dedicated team of mainly Historic Rally Association (HRA) stalwarts,  delivered on adventure, competition, fun and superb locations and scenery to pull together a thoroughly enjoyable 10 days of rallying, covering some 3000 kilometres through innumerable towns across two states.

Just under 40 cars faced the start in Albury, NSW, with several opting to leave the competition five days later in Sydney, where several more joined for the Sydney to Coffs Harbour leg.

The itinerary and results have been highlighted elsewhere, so I won’t go into too much detail, suffice to say some competitors who had never attended a World Rally Championship (WRC) round delighted in the fact that they not only got to compete on some of the WRC roads, but enjoyed some great spectating on the Saturday and Sunday too.

There were no huge horsepowered vehicles and most cars complied with the original classic rules, apart from two stand outs – the immaculate Datsun 710 of Darryn Snooks and the impressive 2016 Paris to Peking winning Datsun 260Z of Mark Pickering.

On a daily basis, aside from traversing original Southern Cross roads and tracks, we enjoyed a selection of forest stages, tarmac and dirt hillclimbs, autocross circuits and two night navigation stages of 30 and 40 kilometres length respectively.  Most days finished mid to late afternoon, and socialising and rehashing the day’s events was a high priority for all.

Everywhere the event travelled, no matter how big or small the towns, there was assistance from local car clubs and enthusiasts, whether it be opening their workshops to facilitate repairs, helping to source parts, or assisting at various circuits.

The event was clearly a highlight for many of these townships and in a sport that is often the subject of protestation, to be welcomed with open arms was a refreshing change. I dare say this was due in no short measure to the effort that Graham and Bob put in during their reconnaissance of the course, and the relationships that they fostered with communities along the way.

For those who left the event in Sydney there was a fabulous presentation night, compete with a Skype cross to Andrew Cowan in Scotland, who spoke to several invited guests, including legends of the ‘Cross, Gerry Crown, Bob Riley, Barry Ferguson, Dave Johnson and John Bryson, to name a few. 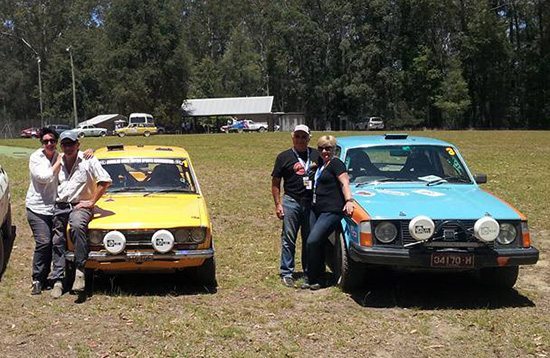 Husband and wife teams Ross and Lisa Dunkerton and Ian and Val Swan (right).Similarly, at the presentation in Coffs Harbour, a Skype cross to Monty Suffern was enjoyed by all (and for those of you reading this who don’t know who these men are, I suggest you Google them.) There was probably more legendary rally talent assembled in that one room that night than anywhere else in recent memory, and Bob Watson is to be congratulated for organising to honour and invite such an esteemed group of men.

The scoring system ensured that any one of a dozen or so could win as time was not accumulated or carried forward, but rather a point system was awarded for placings underneath first.

For example, if you won a forest stage, your score was zero. Second fastest was awarded one point, third received two points and so on, so the overall winner was the person with the least amount of points. What this ensured was that no matter how well you did at each test or sub event, one wrong move and you could drop places, so you had to be on your toes the entire time and could never relax, thinking you had accumulated time up your sleeve.

It was a brilliant way to encourage everyone to keep going, especially if they had a problem, because you were really only as good as your last sub-event result.

A stand out feature for many of us was witnessing young 15-year old Ben Marron compete for the first time with his dad, Steve. Several people kindly assisted him, especially with the night navigation sections and it was great to see a shy young man gain confidence as a competitor over the course of the event.

Getting to experience everything from booking into controls to forest sections, tulip reading, map plotting and navigation meant the experience he gained in 10 days across a broad range of rally aspects was immeasurable.

Graham’s events are the perfect platform for families of all descriptions to compete together, and I’m given to understand that Graham might be persuaded to put together one more event to complete a hat-trick of terrific events.  If he does folks, I can highly recommend getting an early entry in.”