Lassi Lampi in the Starion 4WD on the 1984 Lombard RAC Rally.

Back in the early to mid 80s, European manufacturers were battling for dominance at the highest level of world championship rallying – Group B.

Of the Japanese manufacturers seriously competing in world rallying, only Toyota looked to be closing the gap, but the powerful 2WD turbo Celica was not able to match the pace of the hugely powerful 4WD machines out of the factories of Audi, Lancia, Peugeot, Ford and MG.

Nissan, with its 240RS, had a vehicle that was strong and capable in longer distance events, but lacked the outright capabilities of the 4WD turbocharged competition.

Mitsubishi then took a decision to step up, and followed the proven route of adapting a current performance vehicle in the form of their existing Starion turbo, proving itself at the time in various race and rally competitions in various markets.

RallySport Magazine has looked into this stillborn rally weapon, that was conceived in the early 80s as a rally winner, but was never homologated, as Group B was banned and the rally world moved on.

Before Mitsubishi unleashed the unforgettable Galant VR4 and the subsequent series of incredibly successful Lancer Evolutions, there was the Starion. The factory decided that the Starion would form the basis of their Group B challenger.

With a successful competition history to emulate, the Japanese home office set out with the goal of winning in Group B. Andrew Cowan’s British-based Ralliart Team was given the task of developing a 4WD, 350 horsepower version of the Mitsubishi Starion for Group B competition.

Scotsman Cowan had many notable successes with both the Rootes Group and subsequently Mitsubishi, for whom he signed in 1972. Cowan was notable as a long-distance driver, winning the first two London to Sydney Marathons and incredibly, five consecutive Southern Cross Rallies in Australia.

He was also competitive in the Safari Rally, where he recorded a top four finish four times in five years, and in the Paris -Dakar Rally where his best result was second overall, in 1985.

In 1983, Mitsubishi Motors asked him to establish a European base for their motorsport activities, and so he founded Andrew Cowan Motorsports (ACMS).

It would evolve into Mitsubishi Ralliart Europe, and his cars eventually took Tommi Makinen to four consecutive WRC Drivers’ titles from 1996 to 1999, as well as winning Mitsubishi their only Manufacturers’ crown, in 1998.

The Cowan team included engineer Alan Wilkinson, whose rallying credentials were second to none. He came to Ralliart with a history in Ford’s competition department, Toyota Team Eurpoe and Audi Sport UK, where he fettled their very successful Quattro.

Wilkinson’s job was to develop the mechanical specification and competition configuration of the Starion 4WD rally car that could then be used for the 20 evolutionary models the company needed to build to gain Group B homologation.

Official Group B homologation of the Starion Rally was planned to enable the team to make its debut in world championship rallying with a two car entry on the Lombard RAC Rally in November 1986.

In response to a number of tragic accidents, the outcry over the enormous speed and questions over the safety of the Group B cars, homologation never occurred when Group B was banned mid-way through 1986, and coming into effect after the 1986 season.

In its early development, the Starion used a version of Mitsubishi’s two-litre turbo engine, with intercooler and computer controlled fuel injection system. The factory had a plan to use the Sirius Dash engine that Mitsubishi announced at the 1983 Tokyo Motor Show, with a targeted output of 350bhp.

That engine featured a three-valves per cylinder head with two inlet valves for each cylinder, with one operating all the time and the other being electronically controlled to come into operation when the engine reached more than 2500rpm. Fuel injection was handled by a Bosch EFI computer.

Interestingly, power was transferred through a twin plate clutch to the same 5-speed transmission as the rear-wheel drive Starion, but with stronger internals and a transfer case from the 4WD Pajero. That took the drive sideways to a second propshaft, that went forward to the front wheels. 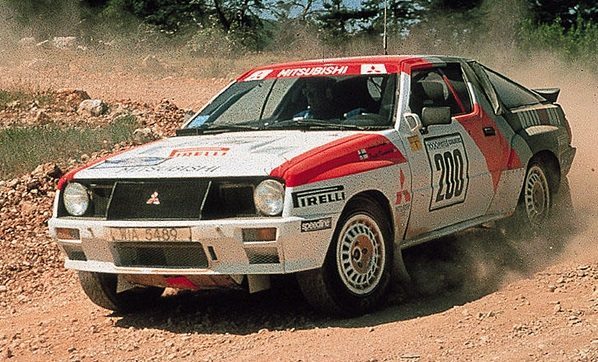 The torque split was permanently 50/50 front to rear, and at the time considerable effort would have been required to design an alternate system for what was regarded to be only marginal benefits of adjustable torque split.

The front axle line ran under the number two cylinder, which resulted in the engine sitting higher in the chassis. As a result, the crank centerline was actually about six degrees from the horizontal.

While the project had been conceived as a converted rear-wheel drive car, the car was still front-end heavy. The wheelbase of the Starion 4WD was the same as the standard car, but overall the car was about 150mm shorter.

The most obvious change to the body profile was to shorten the front overhang, a simple operation because new, lightweight front panels had to be designed in any case. The flip up headlights were replaced by more traditional sealed beam units of the day.

While not still born, the Mitsubishi Starion 4WD had a short competitive life.

Weight was always a very important focus for the design and development of the car, and amazingly for 1985, the car used carbon-fibre reinforced plastics for the propshafts, sumpguard and lower control arms of the McPherson strut suspension.

Virtually all the exterior body panels were fibreglass and plastic (carbon and Kevlar on Evolution models): bonnet, tailgate, door skins, wings, bumpers and spoilers. The resulting weight of the car was an incredible 1050kg.

RallySport Magazine understands that only five cars were produced, and amazingly, three of those are thought to still exist – two in Japan and one in the UK.

In an era of fragile, space-framed bodies and incredible power outputs, Mitsubishi took a simplistic approach to the task of building a rally winner, but sadly this innovative vehicle did not reach the successful heights to which the company aimed. 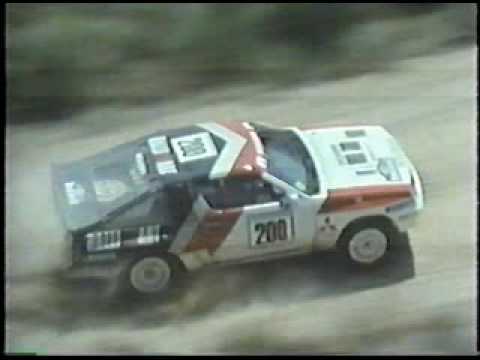 The car competed in numerous events, including the Milles Piste Rally in 1984 and the Hong Kong -Beijing Rally of 1986, amongst others.

The Starion turbo in 2WD configuration enjoyed a successful era in Australian rallying, in the hands of such notable drivers as Greg Carr and David Officer. While the model qualifies for the Classic Rally category, none is regularly competing at this time.

Would a rare Group B prototype 4WD replica possibly be considered for local competition?

Sometimes, it’s only when these cars come to light that someone takes the time to investigate the possibilities?

Watch videos on the Mitsubishi Starion 4WD Rally below: