Strong points haul for Reeves in Rally of Queensland

With a lead of 29 points heading into the third round of the championship, the Victorians were happy to play second fiddle to their main rival, Scott Pedder, and finished in second place on all 10 of the day’s stages.

“The plan for today was never to race Scott, we just wanted to get through the day unscathed and make sure that we took a good points haul,” Reeves said.

“While most of the other guys went out on medium compound tyres this morning, we choose hards as we didn’t want to risk getting a puncture and dropping time. 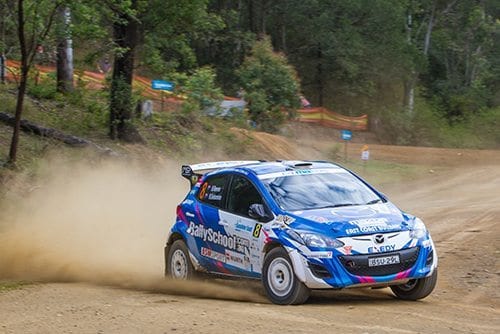 “There was 60km of stages between services, and it would have been easy to get a puncture if we pushed the tyres too hard.

“We used hard compound tyres again in the afternoon, and with the stages drying out a lot more we were able to push a bit harder and get closer to Scott’s times.”

The Mazda2 ran faultlessly throughout the day, allowing Reeves to concentrate on his driving on the tricky stages around Imbil.

“The car went really well,” Reeves added. “We had no issues and made no adjustments to it during the day, so that bodes well for tomorrow.

“The rally is smoother this year, and using only six tyres today has given us 10 to choose from tomorrow, although we won’t get the chance to use them all.”

With 20 points for a Heat 1 win, and 17 for second place, Reeves dropped only three points to Pedder in the championship standings and still leads by 26 points.

And while he took a measured approach to the stages on day one, he believes Pedder was driving at 10/10ths and is determined to take victory in both heats.

“Scott always drives flat out in every rally and he needs to win both days for his championship hopes. Fortunately we only need to accumulate points at this stage, but we’ll be pushing for victory tomorrow.

“We’ll have to see what the weather brings tomorrow as to what tyres we choose,” Reeves said.

“If we keep the pressure on Scott throughout each stage then anything can happen. A puncture or a mechanical problem could be just around the corner.”

While there’s 20 points on offer for a win in Heat 2, a 40 point bonus will also be awarded to the overall event winner, with 34 points for second place.

Day 2 of the Rally of Queensland will see competitors tackle a further six stages, with two tests over 35km in length sure to test both man and machine.